Indukanth Ragade’s Memories of Luz Church Road (MM August 16-21, 2022) makes nostalgic reading for an old Mylaporeon like me. There are a couple of gaps left in the detailed article, which I would like to fill in.

The land with a spacious bungalow in a huge compound, where the M.Ct.M. School stands at present, used to belong to a well-known Andhra family of that era – the Nivarthi family. Mr Nivarthi Ranganatham, an industrialist, was its occupant then. His brother Nivarthi Sundaresam served with distinction as the Deputy Governor of the Reserve Bank of India.

Further west of the Electricity Board office mentioned by the author, there was a bungalow which the author has not mentioned. It was the home of another leading lawyer, Mr Kasturi Seshagiri Rao. He was a son-in-law of Sarvepalli Radhakrishnan.

There is one point of historic interest about Luz Church Road which is worth noting. It was in Sri Bagh, the ‘Amrutanjan’ bungalow of Nageswara Rao Pantulu, where the then warring leaders of Rayalaseema and Circars regions of Andhra met in 1937 to thrash out their differences over where the various centers of power, like the Secretariat and the High Court, would be located when the State of Andhra Pradesh came into being. The terms of the agreement they drew up came to be known as the ‘Sri Bagh Pact’. When the State of Andhra Pradesh was finally formed 16 years later in 1953, the terms of ‘Sri Bagh Pact’ were implemented, with the Secretariat being located in Kurnool in Rayalaseema, and the High Court in Guntur in Coastal Andhra.

As a Besant Nagar resident for nearly 40 years, I am fortunate to have seen, in my younger days, an idllyic Elliots beach. The beach sands were almost clean and the place was quiet, with no other sound than that of musical waves breaking on the beach. The current generation will find it difficult to believe that such a serene atmosphere could have prevailed given the present scenario.

Recently, I accompanied an overseas business associate to Elliots beach. When I suggested that we sit on the beach sand, he was reluctant after seeing the condition. He said that if Elliots beach were to be maintained adequately well, it could be a blessing for the residents of Chennai. To my chagrin, he wryly remarked that Elliots beach would make a good case study how a beach should not be maintained by a civic administration. While we hail Elliots beach as a tourist spot, can it really attract tourists in it’s current state?

There are atleast one hundred stray dogs loitering in the beach and sharing space with the visitors. Obviously, the stray dogs are attracted – the beach has many eateries as well as a fish market, and visitors carelessly discard left overs thereby littering the beach and turning it into a haven for the animals.

In recent times, authorities have spent several crores of rupees in “beautifying” the Elliots beach with “imaginative schemes,” without understanding that nature cannot be bested in splendour by humans. The net result is that the natural beauty of the beach has been marred considerably.

To add insult to injury, Car Free Sundays is being organized by G Square Housing and The Hindu in association with the Greater Chennai traffic police. Several events have been conducted such as martial arts, boxing, cycling, events for carom players, silambam, dance fitness sessions etc. These are claimed to be power-packed, highly-entertaining events for visitors.

I cannot help but describe these car-free Sunday events as amounting to misuse of Elliots beach for purposes other than what the beach is meant to be.

On car-free Sundays, vehicles are banned to ensure clean air. But, any benefit is quite offset by noisy and crowded events that cause more pollution than the dust generated by vehicles.

All over the world, whichever region is blessed with a beach, governments put forth considerable efforts to maintain it in it’s natural condition as much as possible, so that it can provide a serene atmosphere to the visitors, who are often exposed to noise and fury and unclean conditions in several public places.

The effort should be to ensure that the beach is both noise-free and clean. By conducting such events, the beach is converted into a noisy as well as untidy place.

Finally, authorities must understand that visitors love Elliots beach and visit the beach expecting that it would provide cool breeze, clean conditions and a place to sit in peace. They come to enjoy the gift of nature.

There are so many other crowd-accommodating places where such noisy events can be conducted. Why victimize Elliots beach?

Senior citizens like me who have seen a noise free and clean Elliots beach feel the pain of the beach being put to use for the purpose for which it is not meant.

While deleting old emails I came across this interesting correspondence with the then Commissioner of Chennai Corporation, to which I do not think we received any reply.

The letter received from the Corporation is surely a collector’s item.

A copy of the above letter received from your office is enclosed. 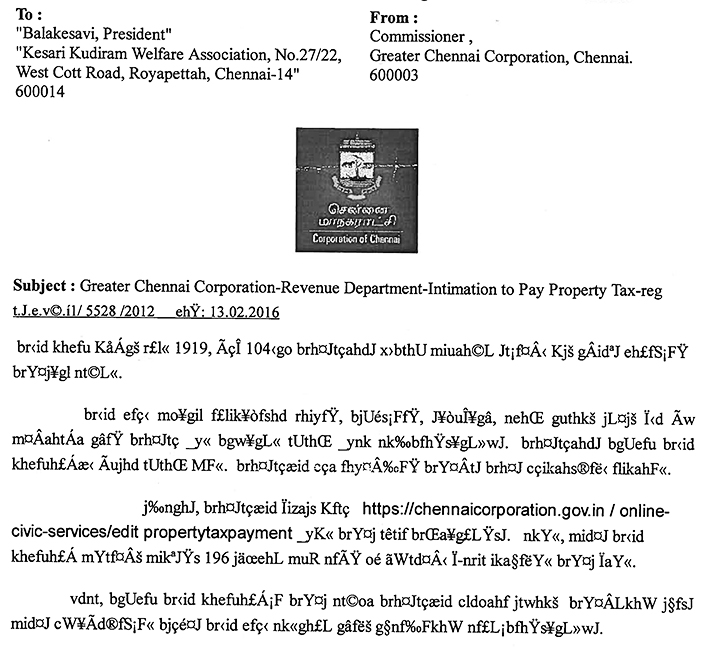 It seems to be in some kind of machine language, with a faint resemblance to Turkish. With Chennai being in the list of cities to become ‘smart’ I wonder if the sending of routine communications from the Corporation to the citizens of this metropolis has already been taken over by ‘smart’ machines. Since we the citizens have yet to become ‘smart’ enough to understand this language, I shall appreciate if the letter is re-sent in a language we can understand preferably Tamizh or English.

Also, since I am no longer the President of Kesari Kuteeram Association, kindly address the English/Tamizh letter to the current President Mr.K.B.R.Murthy