Lost Leisure: Sculpture at play? The curious case of the Thiyagarajaswamy temple, Thiruvottriyur

-- by by Vinita Sidhartha

Traditional games have a rich and interesting history. There is much we know about them and much that we don’t. In some cases, we remember the rules, the names and how we used to play the games. But who came up with them? Where did they come from? Do these games perhaps carry a deeper meaning? Of these matters, we know nothing. There are neither copyrights nor creators to draw details from. We are, however, rich in clues that help inform us – the floors of numerous temples and monuments carry fascinating etchings and patterns that whisper their stories through the ages. They aren’t always obliging with the answers we seek – in fact, there are times when they throw up more questions than hints, forcing us to dig deeper for an explanation. In this column, titled Lost Leisure, I will share a few of the puzzles that I have unearthed in my quest to learn more about our traditional games.

As you walk around the beautiful and ancient Thiyagarajaswamy temple in Thiruvottriyur, you will see, on the northern wall, an exceedingly elegant sculpture of Brahma, Vishnu and Shiva, all united in a single form, standing on one leg. It is aptly named Ekapadamurthy or the One-legged Idol. The name and the form is suggestive of the symbiosis of the three forces that shape human destiny. 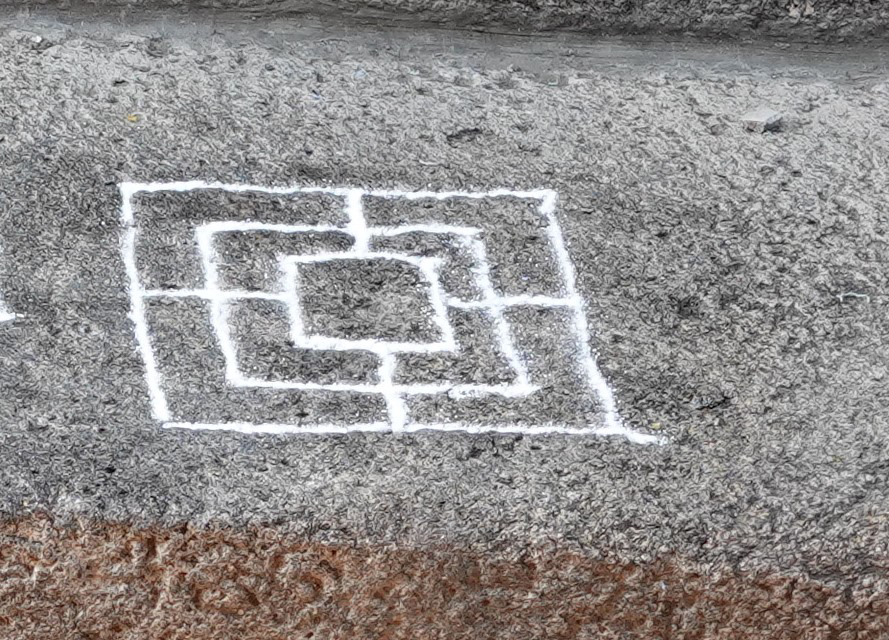 The Dahdi board dusted down with flour.

Many visitors to the temple have seen and admired this sculpture. Some have worshipped it, too. What typically goes unnoticed, however, is that almost directly underneath the figure are the faint markings of a couple of game boards. It is not always clear to the eye and sometimes one needs to clean off the dust, wipe it with a wet cloth and look at it through the right perspective to see the lines clearly. Sometimes, we have to dust it down with flour so that the white powder outlines the grooves of the boards more visibly.

One of the boards is a game called Dahdi. It is a game of alignment or a three-in-a-row game of the same genre as noughts and crosses or tic-tac-toe – but far more complex. Played on a grid of three concentric squares, each player has nine game pieces and has to create multiple alignments of three by placing and moving the game pieces, each time removing one game piece of the opponent till one or the other is left with only two pieces.

While Dahdi may be a complex three-in-a-row game, this concept of ‘the alignment of three’ is not new to our philosophy. Be it Brahma, Vishnu and Shiva or Lakshmi, Saraswathi and Shakthi, this symbiosis of three forces is deeply ingrained in our thinking. But this isn’t just an Indian concept – it is an idea that has captivated humanity as a whole, one that is echoed in concepts as wide apart as the ancient Egyptian Seti, Isis and Horus to the Abrahamic Father, Son and the Holy Spirit. It is this seminal philosophy that is reflected in the sentiment of Dahdi. The fact that the game is etched under the sculpture of Ekapdamurthy is interesting, to say the least. Was it a coincidence or was it intentional? We will never know. What do you think?

There are so many puzzles around us, but to understand them, we must preserve our games and protect our floors for in them, we could well have the answer to not just our questions on games but much of human philosophy and thinking as well. To know more, write to me at vinita@kreedagames.com