When Madras too had a Globe Theatre

How can Madras not have had a Globe Theatre? That name, forever associated with the Bard of Avon ought strictly to have been a playhouse but for some reason cinema took to it and practically every city in the English-speaking world that had a significant film following seems to have had a Globe Theatre. Ours too was no exception and as if to prove we were one up on others, we had two – the Globe and the New Globe.

Our story begins with Raghupathy Venkayya, who having seen success in running a touring talkie early in the 1900s (see Vol. XXIX No. 23, March 16-31 2020 – Not Much Gaiety In Its History) decided that he ought to become a theatre owner. To him goes the credit of being the first Indian in the city to build a motion picture house. The Gaiety on Mount Road opened just a week after the Emden shelled the city, which means it was in business by end September 1914. Then came the Crown at the end of Mint Street, and the Globe in Purasawalkam, both inaugurated in 1915. This Globe was later renamed Roxy and survived for long, under various managements, before being demolished a decade or so ago, to make way for Saravana Stores, Purasawalkam.

All three, Gaiety, Crown and Globe/Roxy were taken over by the Official Assignee of the High Court of Madras in 1925, when Raghupathy Venkayya and his son Prakash, chiefly owing to financial profligacy, ran their film-making company to the ground and declared insolvency. They had been running the Star of the East studio behind the Globe/Roxy and this had apart from them the Maharajah of Pithapuram, Sir R.K. Shanmukham Chetty and Govinddoss Chaturbhoojadoss as its Directors. The Roxy and the Gaiety stood on leased land and the lease of the former was taken over by Globe Theatres Pvt Limited, promoted by Varadaraja Pillai, a man from with political connections in Salem.

By this time, Mount Road was fast emerging as the place to be in as far as films were concerned. The Kushaldoss Chaturbhoojadoss family owned a vast plot of land measuring eleven grounds at the intersection of General Patters and Mount Roads, and this was deemed ideal for a theatre. For reasons best known to the family, it was decided to enter into a lease agreement with a film promoter for the development of the theatre. The land was therefore leased to M Varadaraja Pillai. The lease was entered into in 1938 for a period of 15 years, at a rent of Rs 560 per month. Varadaraja Pillai thereafter constructed the theatre building on the land and thus came into existence New Globe Theatre.

Located at 2 & 3/18, Mount Road, with ‘no access from General Patters Road’ as the theatre management reminded patrons, this soon became a location of choice. One of the reasons was of course that it screened only English films. This by itself was a throwback to the old Raghupathy Venkayya days when he made it a point to screen films from the US and the UK in his theatres. 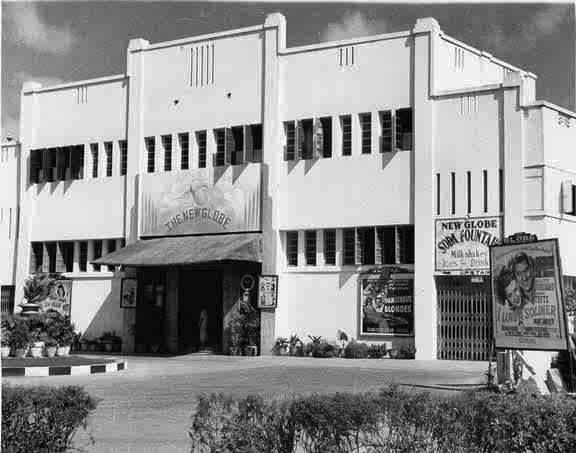 There is just one photo of New Globe available in the public domain on the internet. It reveals a square building with an Art Deco front – chiefly a stepped façade. To one side is a soda fountain. No pictures of its interior seem to have survived. It is also not clear as to who the architect was. From the design it appears to be the creation of L.M. Chitale but we cannot be sure. Varadaraja Pillai seems to have a made a going concern of New Globe and everyone was happy.

However, what happened subsequently is of great interest. The lease expiring in 1954, Varadaraja Pillai asked for and successfully obtained an extension of it for a further ten years, at a marginally enhanced rent of Rs 630 per month. When that period expired, the Kushaldoss family opted to exercise its rights as owner. A clause in the lease said that at the end of the tenure, the owner could opt to purchase the theatre building, valued at the time of the lease at Rs 50,000, less depreciation. The family graciously decided to waive the depreciation and sent in a cheque for Rs 50,000 in full with a request that the property be handed over. This Varadaraja Pillai refused to do, claiming protection under the Madras City Tenants Protection Act. The case dragged on till the mid 1970s, making its way up to the Supreme Court of India. At the same time as this case, Varadaraja Pillai was fighting against handing over land to the Salem Municipal Corporation. He had in 1939 entered into an agreement to build a theatre in that town on public land, with a proviso that at the time of expiry of lease, he would demolish the building he constructed and return the property as an empty plot. What is interesting is that in Salem he was claiming protection against the same Madras City Tenants Protection Act! Matters were compounded further when on the closure of the New Globe owing to litigation, some of the workers demanded that they be employed at the Roxy and went to court as well!

Pillai was a close associate of the then Chief Minister of Tamil Nadu, M. Karunanidhi. The progress of the cases was therefore watched with keen interest. The verdicts went against the owners in the lower court and the Madras High Court. There was however a reversal in the Supreme Court and Pillai was asked to handover the land to the Kushaldoss Chaturbhoojadoss family. Just then, and most conveniently, the Madras City Tenants Protection Act was amended by the DMK Government which enabled Pillai file for a review at the Supreme Court. When that went against him, he began once again at the Madras High Court on a technicality. Eventually, in 1974, faced with a contempt petition in the Supreme Court, he had to give in. The fact that the land was by then valued at Rs 25 lakhs was noted by the Sarkaria Commission while probing charges of corruption against Karunanidhi. It was perhaps one of the earliest instances of political interference in a real estate transaction in Tamil Nadu.

The Kushaldoss Chaturbhoojadoss family managed to take over the land and building of New Globe. The theatre now underwent a name change and became Alankar. It continued with its tradition of screening western films and as per MVL Mani in his blog @mattermani, it screened all of Jackie Chan films in the 1990s. That it seems was the place to go to for all the action.

But by then the theatres of Mount Road were all feeling the heat – the video cassette revolution was followed by that of CDs and then came pirated CDs. People began to watch films in the comfort of their homes. Gradually, theatres on Mount Road began to make way for malls and office blocks. The New Globe too was demolished and Prince Kushal Towers, a multistorey building promoted by the Kushaldoss Chaturbhoojadoss family came up in its place. That ended the story of yet another Madras landmark.

The above write up was put together chiefly through a reading of court documents involving the theatre. What is surprising is that the New Globe hardly features in cinema writing unlike its illustrious contemporaries such as the Wellington, or the New Elphinstone, or for that matter Safire. Was it because it screened only English films and therefore had some disconnect with Tamil writing? I am sure a read of old film magazines such as Talk and Tone, Sound and Shadow and ­Pesum Padam will reveal a lot more. I trust that my brief write up will encourage someone to take that up. Certainly, the theatres of Chennai that was Madras need a proper history to be written.