It is very easy to get dispirited when you are dealing with Government agencies. At least that is the experience of The Man from Madras Musings, which is why he prefers to keep his interactions with the powers that be to a bare minimum. But then these are times when MMM finds his time increasingly taken up by the powers that be, and he has no option but to humour them. The problem with ignoring such powers is that they then cease to be benign and begin exercising their powers. Hell hath no fury like the powers scorned.

But there is no doubt that such visits provide plenty of grist for this column’s mill. You may not be far wrong in saying these are heaven-sent opportunities. Right from the doorman saluting you like an automaton just because you happen to be someone chummy with their top boss, there is always something to amuse, and uplift. MMM once even had a couple of uniformed sentries presenting arms under the assumption that he, MMM, was someone very big in their world going around in mufti.

The lift is also a symbol of power and prestige in these havens of babudom. There are lifts, and lifts, as MMM discovered. On the outside they are all the same – a plethora of ugly posters starting with those of the local unions to the other obligatory ones concerning deaths, the fight against COVID, and the injunction to switch off lights to save power. This being a democracy outwardly, the lifts too manage to give the same impression. It is the interior that has all the difference – the ones that the clerical cadre goes up and down floors by usually will have collapsible shutters, groan and lurch each time the button is pressed, and above all, a metal stool usually empty. The last named is for the lift attendant who is AWOL. The superior lift on the other hand, all sleek and metal-finished, will have a mirror, a 24×7 running fan, and a liftman in attendance. He is usually one in a long line of relays through whom the big boss’ office bag and lunch will be delivered at his desk.

MMM has also come to realise that the lift by which MMM is wafted upwards to the higher echelons of power is a sure barometer of the current prestige levels of the officer he is to meet. If MMM is taken in the second-class lift then it means the officer concerned is a non-entity. If on the other hand it is the sleek and elitist lift it means MMM’s host is a powerful person indeed. MMM these days is meeting up with one of the latter variety. The lift even has a red carpet inside it.

But these lifts can be temperamental. Sweeping into the portals of power and being ­saluted and bowed at, MMM was ­escorted to the all-important lift, only to find that the doors did not close no matter how wisely the liftman pressed the buttons. It was a crisis of mammoth proportions. Here was the big boss’ important guest and there the lift had to fail. MMM stepped out and ­suggested that he uses the staircase. This was met with consternation – what would the big boss say? MMM secretly wondered if he ought to suggest that four people carry him up the stairs in a sedan chair but remained silent largely out of fear that the suggestion may actually be implemented. The last thing MMM wants is to be carried around by four people. He then made for the second lift and this caused a near riot. No way said the liftman and others assembled – that was not meant for the guests of the super boss. Now what was to be done? Time was ticking away and the big man was known to get impatient if guests were delayed.

It was then that a prize fighter of sorts stepped forward. He asked MMM to get into the superior lift and followed suit, a protesting liftman in tow – bureaucratic caste rules forbade the prize fighter from boarding that lift. The prize fighter just brushed him aside for as is well known, when the going gets tough, the tough get going. With a grunt he indicated that the liftman presses the button instead of wasting his time on rules. Such was his personality that the liftman obeyed. The doors budged an inch and then stopped. The prize fighter then pressed both doors together using mere brawn. The lift closed with a might groan and moved upward. All was well. It was prised open the same way at destination and within a trice the prize fighter vanished – to make his way down by the stairs. He did not want to be seen in the boss’ lift was the smirking liftman’s comment.

There are many out there who seem envious of the exalted status that the amateur weathermen of our State enjoy on social media but The Man from Madras Musings has nothing but sympathy for these enthusiasts who have rightfully earned recognition. There is a heavy price to pay for this popularity as is evident from some of the inane queries that they need to answer on a daily basis. During the rainy season, by which MMM means that period of around 45 days in a year when it may rain in Chennai, these questions become a flood and simultaneously reach the pinnacle of stupidity. MMM lists a few below:

1. Will there be school tomorrow?

2. You have mentioned easterlies – what are they? Are they winds from the east?

3. Sir you said it will rain heavily in South Chennai, but does that include CIT Colony second street?

5. On the 16th of December I plan to host an open-air event. I want to know if it will rain.

6. Sir you said Government has declared holiday today for schools, but does it apply for staff also or only students?

7. My brother has left early this morning and now you say it will rain. How can he come home?

MMM wonders that these people can continue to predict the weather patiently in the face of such a barrage of inanity. 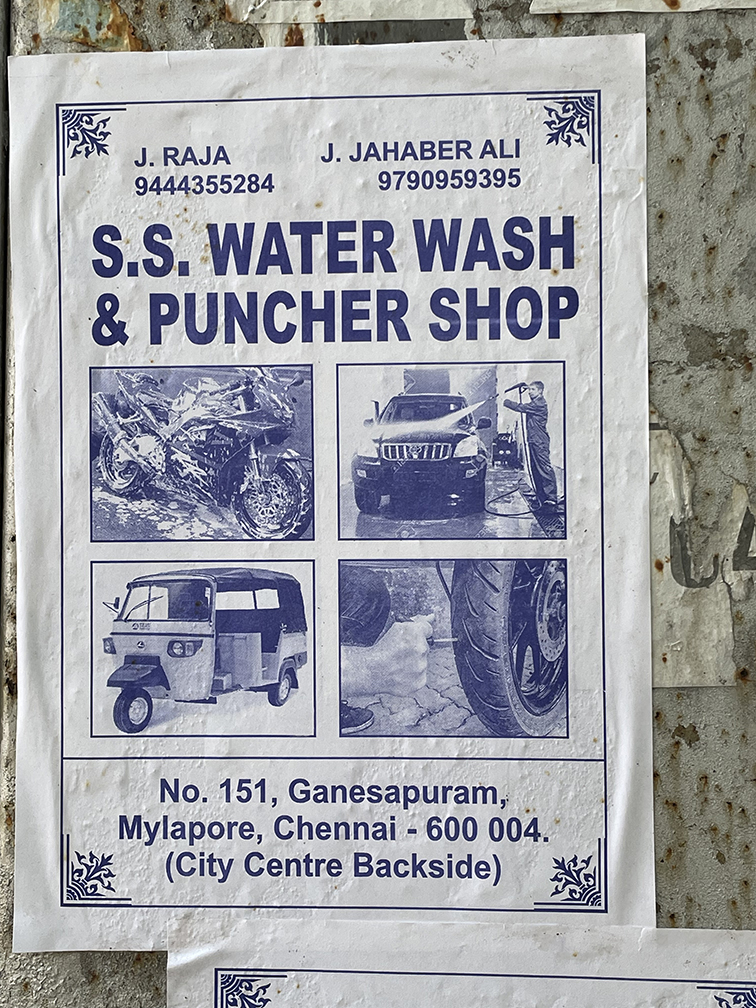 The Man from Madras Musings was tickled pink to see this poster. From a time when we were a people where Bhashyam and Basheer happily co-existed in everything including street names, acrimony has increasingly become the order of the day. It was therefore nice to see J Raja and J Jabaher Ali starting off in business together. Of course, Raja may be Raza which does dim MMM’s optimism. And so may their business pack quite a ‘punch’.

12989Can we please let medical education be in English? 12987An informed public calls for Transparency in governance, not Translucence 12982Heritage Watch: Whither the Music Season? 12979Centenary of the Southern Railway Headquarters 12975Gandhi Nagar, Adyar – The first layout of Madras that is Chennai 12968A device used and some methods practised by Tamil mariners in the mid-19th Century 12966The dashing wicket-keeper batsman sans inclusion in the Indian team 12961Our Readers Write