A city built around a temple

The Meenakshi temple is Madurai’s heart and the inner city is built around the grand edifice with ‘expanding, concentric, roughly square roads.’ Mano continues – “Within the framework of these roads is a network is narrow streets and narrower bylanes. The houses on the bylanes were sometimes very small indeed. But these houses were not only as self-contained as the relatively larger ones on the main roads, but they also looked attractive, what with small but heavy rosewood doors studded with decorative brass knobs and balconies with wrought iron balustrades.” 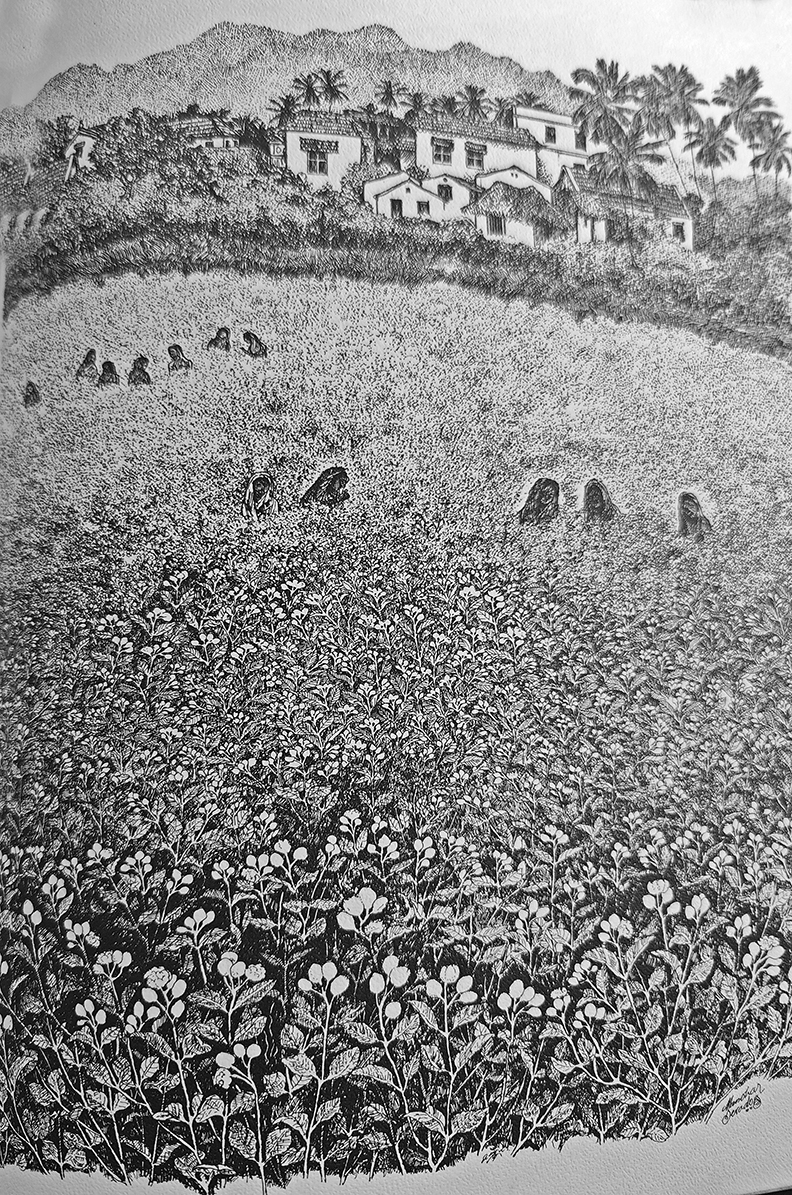 The jasmine grown in Madurai – Madurai malli – is famed for its fragrance and beauty. Accompanying this arresting sketch of a jasmine garden are these notes from Mano – ‘Jasmines cultivated around Madurai are so special that every time friends came from Madurai to Madras, my wife, Mahema’s only request, was that they bring her a charam of jasmine… The buds from Madurai are considered the best, not merely in Tamil Nadu, but in the entire country.’

According to Mano, it was unusual for a town of Madurai’s size to have a cinema hall that exclusively catered to English movies, even in the early 1950s. But Madurai had two such theatres – Regal Talkies and Imperial Cinema. Sketched here is the latter, which Mano says he was ‘particularly pleased’ to draw in April 2004, owing to the elegant environs – “the street-house next to the quaint Imperial with the East Gopuram at some distance and a stately bouquet-like indigenous pungai tree in the drawing, greatly enhanced my enjoyment.” 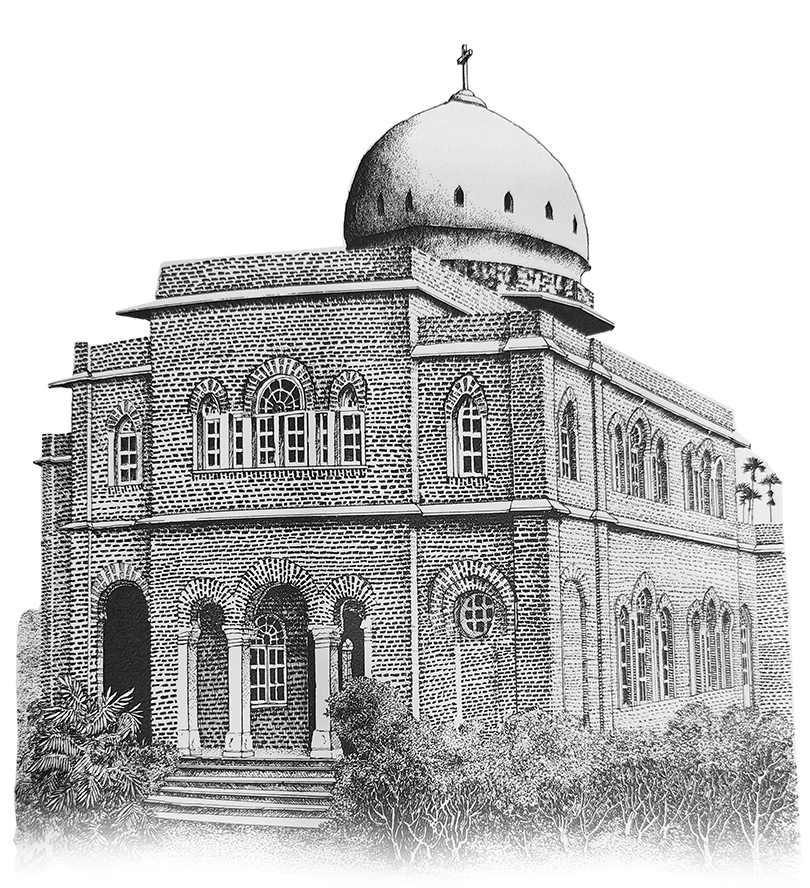 A pen and drink drawing from Mano’s final year in college, featured on the cover of the college magazine that year. The work, Mano writes with a touch of good-natured bemusement, ‘evoked far greater enthusiasm from the students than even the ones I did of the college beauty, Bhavani.’ 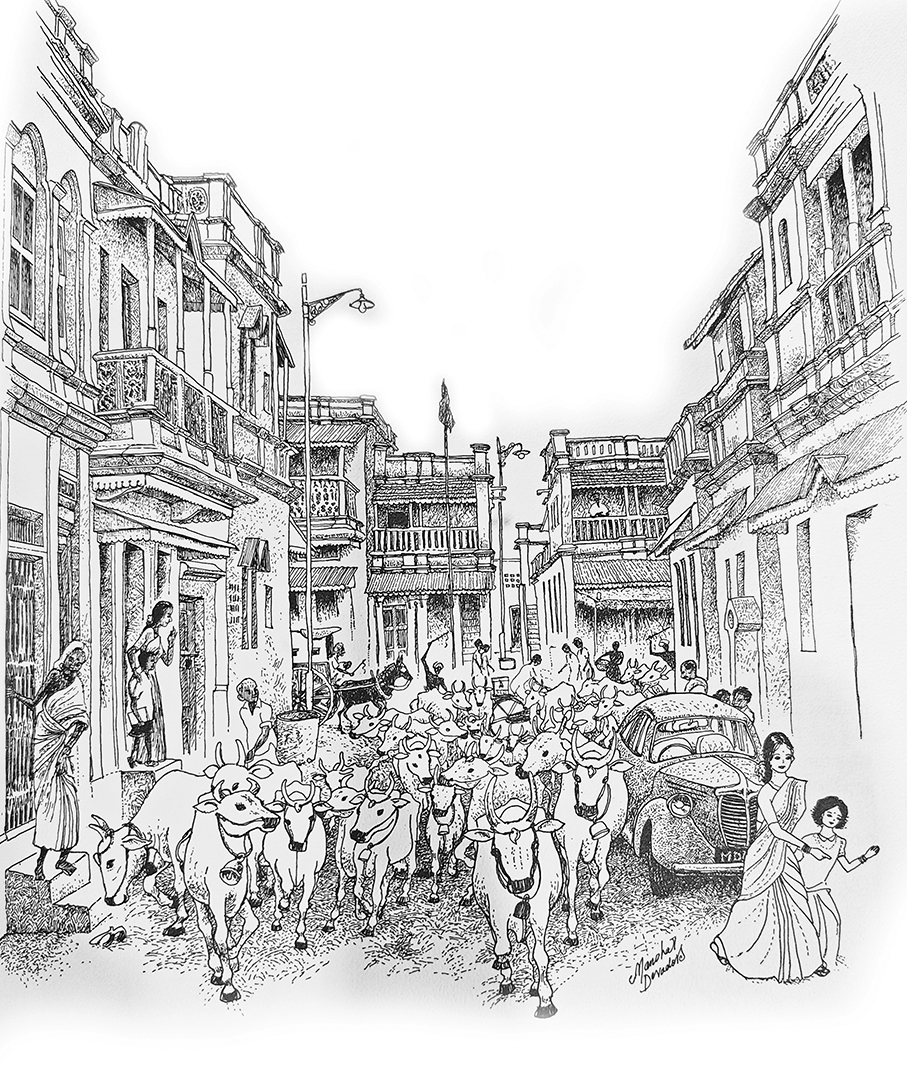 Privileged to share its name with the small Paychiamman shrine that it leads to, Paychiamman Padithorai street in Madurai is described thus by Mano – “Half-a-century ago, if one had walked on Paychiamman Padithorai Street, towards North Masi Street on certain mornings at certain times, one would have suddenly heard a cacophony disharmoniously trying to imitate the tinkling of many small bells. Then one would see cows emerging from North Masi Street and rushing towards one – as in my drawing completed in November 1985 – cows with bells improvised from old aluminium tumblers, empty tin cans and the like tied around their necks. A community of Konars (cowherds) lived in and around North masi Street, especially in villages-like enclaves sprinkled here and there. Though there was hardly enough space even for people, these families managed to rear a cow or two in their crowded quarters. Konar boys would collect herds of twenty to forty cows and drive them through the narrow Pachyiamman Padithorai Street to the dry river bed. They would shout and cuss. Women and children would run helter-skelter, not because they were afraid but because they did not want these docile creatures to inadvertently step on their toes or unintentionally knock them over.”