The Puzzle of the Aadu Puli Aatam Board Reserved for a Player – Yeri Katha Ramar Temple, Maduranthakam

The game of the goat and the tiger is one of the most popular folk games across India. The board varies from place to place across the country and so too does the number of goats and tigers. Perhaps the most popular version of all is the one played in South India on a board shaped like a triangle bisected by parallel lines.

But no matter what the version of the game, its essence stays the same. The tiger and goat games are hunt games where tigers hunt the goats, while the goats in turn try to surround the tigers so they cannot move. What makes this hunt game interesting is that it is an asymmetrical game, with both players having differing number of game pieces, different goals, and different moves, yet the seemingly weaker goats are as strong as, and are as capable of winning, as the tiger. 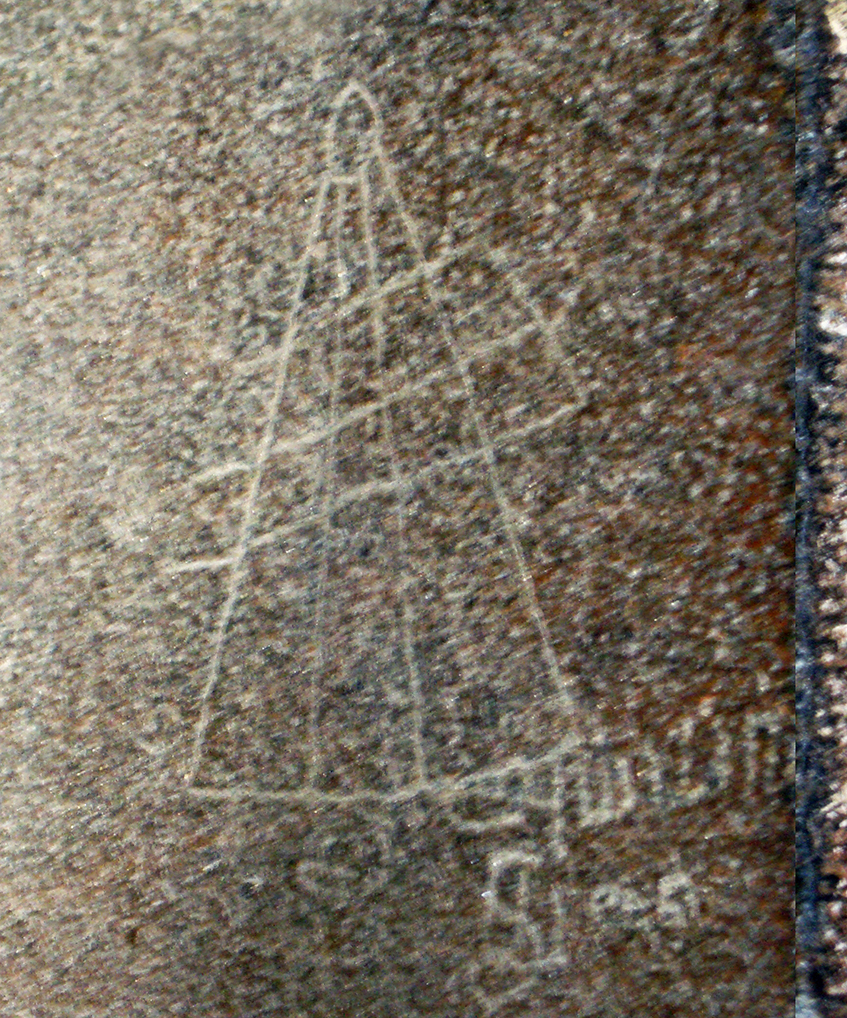 The true essence of the game is revealed in the fact that when the goats work together without sacrificing a single piece, they can defeat the tiger. Essentially an important lesson in building communities, or working together, and ensuring the entire community is protected, in order to succeed.

You will find these games etched on the floors of numerous temples, often with many boards within a short space of each other. This is perhaps an indication of its popularity as probably numerous people played, or it even became a competition space.

The popularity of the game is clearly attested to in this particular etching, which has somebody’s initials carved at the bottom of it, clearly claiming ownership for it much like a schoolboy today, would write his name on a cricket bat.

Who was the person who etched this game and left his name there? Where did he come from? Why was he so keen to establish his ownership over this board? Was he a temple builder? A stone mason? A visitor? One will never know. So, the next time you are at the Eri Katha Ramar Temple in Madurantakam near Chennai, while worshipping Lord Rama, please also take a few minutes to look at this board. Close your eyes and perhaps you will be transported back in time and hear the excited chatter of people enjoying the game.

Keep reading, there are so many more puzzles, but to understand these, we need to preserve our games and protect our floors, for in them we could well have the answer to not just our questions on games, but much of human philosophy and thinking. To know more write to me at vinita@kreedagames.com