He cared deeply for the Game and the Players

The packed ballroom at the Taj Coromandel said it all. It was the perfect tribute to N. Sankar as leading industrialists and sportsperson paid glowing tributes to a man who with his generosity, dynamism and far sightedness had touched numerous lives.

As a professional sports journalist, my association with Sankar centered around sport and I found him extremely knowledgeable and always aware of the latest trends around the sporting world. Most importantly, he cared deeply for the game and the players. Cricketing legend Kapil Dev put it succinctly at the memoriam function when he said “there is no Indian cricketer who has not been touched by Sankar’s kindness’’ while highlighting his passion for cricket. Vijay Amritraj and Ramesh Krishnan too chimed in while praising Sankar’s role in promoting tennis.

Sankar’s love for the two sports started at an an early age when he used to play both of them. He was more proficient in tennis and Ramesh recalls playing with him at the club level when he had “a very neat style and accurate ground strokes besides covering the court well.’’ Vijay, who also played with him, remembered him as “a wonderful player, great in business and an amazing lover and supporter of tennis.’’

Vijay added that he enjoyed his time with Sankar well after his playing career. “He was a true gift to Tamil Nadu tennis before and after his stint as president of the TNTA,’’ he said. Sankar was TNTA president from 1989 to 1994 and during his term he set the association on a new path with his broad vision of growth. The national clay court championship now in its 29th year began during his tenure. He was also the driving force behind the Rs. one million Indian Bank Indian Classic held in Chennai in 1993. All the leading players in the country including Leander Paes and Ramesh, who won the title, participated. Ramesh also remembers him as a dynamic organizer who could get things done because of his passion for sports.

For all his love for tennis, Sankar will be remembered most for his role in promoting cricket. Driven by an unmatched passion for cricket he pioneered the concept of a professionally run private cricket club. His love affair with the sport began as a cricketer who played for Jai Hind CC in the 60s. And at a time when there was not much money in the game, Sankar’s Sanmar group ran the famous Jolly Rovers club which has been the premier institution of cricket in the city. Over the years, it has held its own against strong opponents from other states in various tournaments all over the country. That’s because the company has recruited most of the leading players. As former Indian cricketer Bharath Reddy, who heads the cricketing operations at the Sanmar group put it, “Sankar had a knack of spotting talent.’’ Several Indian players from S. Venkatraghavan to Mi Vijay have represented the Jolly Rovers.

It was Sankar’s father K.S. Narayanan who took over Jolly Rovers in 1966-67. This was around the time Sankar joined the company, and a few years ago, when the club celebrated its golden jubilee, he organised an event to honour all the past players. It was a touching gesture, but one very typical of Sankar, who always had the good of the game and the players uppermost in his mind. 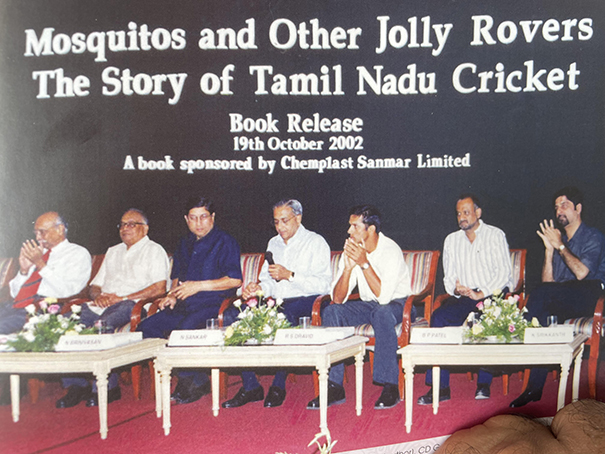 The father-son duo brought in the concept of outstation players figuring in the TNCA league back in the 60s and thus Jolly Rovers had in their ranks P.K. Dharmalingam and V. Balaji Rao from Services, K.R. Rajagopal and Najam Hussain from Karnataka and K.V.R. Murthy from Andhra. Many other outstation cricketers benefited from this far-sighted move.

What stood out among Sankar’s qualities was his generosity. He made sure that the cricketers got the best treatment, equipment and salaries. As Reddy recalls, “When Covid was at its peak Sankar made sure that full salary was paid to the players, scorers and other support staff. He always gave a lot of importance of the welfare of the players.’’ Former India pace bowler L. Balaji who played for Jolly Rovers from 2000 to 2009 termed his interactions with Sankar as a great experience – “Jolly Rovers gave me the opportunity during the initial stage of my career and I am forever grateful to Sankar for that. He was someone who had a lot of passion for cricket and ensured that all possible facilities were given to the players.’’

In the long run, not just Jolly Rovers but Tamil Nadu cricket benefited from his visionary moves and Sankar who was TNCA president in the early 90s can take credit for this.

12050Can we grow beyond renaming roads? 12048Perungudi landfill fire — A harsh reminder why waste segregation at source is non-negotiable 12045Heritage Watch: Restoration of Chepauk Palace 12040Lost Landmarks of Chennai 12038Sanmar, what Sankar built 12036The peregrinating inscription of Ellis 12034Unheard Voices of Tranquebar – II 12032Prof. Krishnamoorthy Srinivas – a look at this life and his work – II 12024Short ‘N’ Snappy 12020Our Readers Write