The untimely demise of N. Sankar, Chairman of the Sanmar Group, is a great loss to the country. He was not just a successful industrialist but also one with a heart full of compassion. Madras Musings has also lost a well-wisher and patron in his exit.

Sankar was a multifaceted person involved in various activities besides his family businesses. Corporate Social Responsibility was in his blood, which made him a spontaneous and voluntary donor for all good causes. In short, he was an excellent human being worthy of emulation by his peers in the industry.

Hope N. Kumar, his illustrious brother, and Vijay Sankar, his son groomed by him, will carry on the good legacy left behind by Sankar.

By dedicating the entire issue dated May 1-15, 2022, Madras Musings has aptly paid rich and respectful tribute to its mentor par excellence and patron, N. Sankar, who passed away on April 17, 2022. Each article in the issue has brought out the late patron’s brilliance and his deep involvement in various fields. Very rarely do we come across men of excellence of late Sankar’s stature. As a reader, I bow my head and pray for his soul to rest in eternal peace.

The revision in the price of domestic LPG cylinders effected on May 7, 2022 comes at a time when the common man is already saddled with the skyrocketing prices of essentials. While this has come as a shocker, those who have made prior bookings for refills find themselves obligated to be after the Distributor even though they have received the booking confirmation via SMS as well as the cash memo prior to revision.

On May 2, I booked a refill. On the same day, I received the SMS confirming the booking and also the details of the cash memo, indicating the amount payable. As I was eagerly awaiting the delivery, another SMS came on May 7, regarding another cash memo but with the revised amount. I then rushed to my Distributor and questioned why the refill was not delivered even after a lapse of five days. The office assistant immediately checked the details in the computer and confirmed that the cash memo was handed over to the delivery boy on May 3. When I asked the assistant as to whether they have any system to ascertain from the delivery boys the number of deliveries they make each day, she did not have an answer. She immediately contacted the delivery boy and sought to know from him why the delivery was not made. The boy stated that the delivery would be made immediately [this was on May 7].

Whenever the LPG price is revised, the distributors take back the old cash memos held by the delivery boys and replace them with new cash memos with the revised price. When I told the assistant that I will only pay the pre-revision price, she readily agreed and informed the boy of the same. Thus, because of my quick reflexes, I could insulate myself from the immediate impact of the price revision.

Since the oil marketing companies are revising the prices of LPG cylinders every now and then without any forewarning to the consumers, the consumers have to be on guard lest they be taken for a ride. Since there is a wide disparity between the price of domestic and commercial cylinders, the games the delivery boys play either in collusion with the distributors or in isolation, do not need any elaboration.

The oil marketing companies urge consumers to follow the pre-delivery check – verifying whether the seal on the cylinder is intact, weighing the cylinder to confirm whether it contains 14.2 kg of gas, and checking for any leakage. Seldom do consumers get this check done, nor do the boys volunteer to conduct such checks. Though the distributors are supposed to equip their delivery boys with a weighing scale, no distributor follows this mandatory condition. Thus, the advisory of the oil marketing companies often goes unheeded.

Transforming an eyesore of a lane

How do you transform a public space that stinks from cattle dung and urine and is treated as a dump by auto mechanics? Beautify it with street art and get the residents to make use of the private lane. It has worked for much of the community on Kallukaran Street, a small colony that lives alongside the ancient Sri Madhava Perumal Temple in Mylapore. “Today, our children sit outside and play games with each other, like carrom. The seniors unwind and chat in the evenings,” says resident K.R. Jambunathan, a former State Bank of India staffer who has lived here for about 70 years.

The seed for change was sown in January this year, even as the pandemic began to wane. The civic-minded members of this colony met to bounce around a few ideas that could improve the conditions outside their homes. Some of them had read reports of people in neighbouring colonies who had painted their public walls to discourage pedestrians and others from urinating or dumping waste. The group decided that art could be a solution for them, too. Says local resident Appu Jagadish, who hails from a family of traditional sculptors who once worked here and gave the street its name, “People here were waiting for somebody to take the lead. Once that happened, they supported the cause with money and work.” Appu, who runs an NGO that provides lunch to the homeless in this part of the city, has deployed his own group of volunteers to maintain this lane in the past.

And so, residents pooled in money to buy paint tins and brushes. They invited adults and children to paint and draw on the wall over a weekend This effort was repeated on the following Sundays and will continue. The drab look had disappeared. Somebody has also fixed a basketball hoop on one-section of the wall, while some others have fixed net-poles to enable people to play shuttle-cock. Others contributed carrom boards to encourage children to play in the open. All it took was simple seating arrangements for senior citizens step out and chat with each other. The space has come alive. 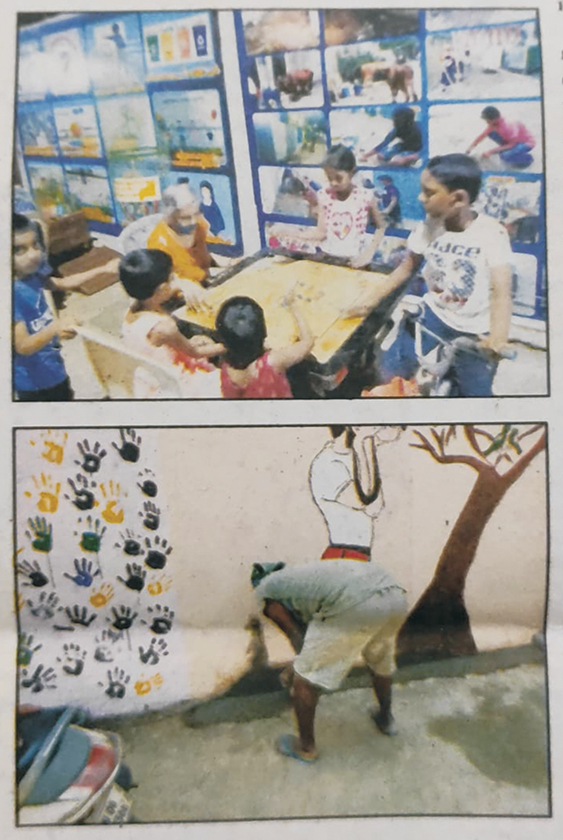 “The idea of getting residents to own the place and make good use of it so that it could not be vandalised has succeeded,” says Jambunathan, who now plans to invite the Mylapore MLA to formally launch the tree-planting effort here.

If you are wondering why this community made such an effort to bring change in their lives, then we must visit the recent past and understand the condition the place was in. The rear portions of almost all the houses on Kallukaran Street face one of the walls of Sri Madhava Perumal Temple. Between the houses and the temple wall is what could be called a lane, some 12ft in width. It was cemented recently. In the past, maids working in these houses would enter the house from the rear and work there.

Since this ‘L’ shaped strip of lane was in some ways, no man’s land, encroachments took place. At one point, there were a few cattle sheds where people reared cattle, and sold the milk locally. Now, only one remains and this remains a civic bother for the colony. Others also encroached on the lane and parts of it became garbage dumps. Today, an automobile repairs shop illegally operates here.

Civic-conscious residents like Jambunathan and Appu Jagadish realised that if the face of this lane were to change, it must be a transformation encouraged by their own efforts. That is how some creative ideas were discussed and the wall art effort began. The art effort led to other ideas and in all, has made this public space a welcoming one. – (Courtesy: Mylapore Times.)

12050Can we grow beyond renaming roads? 12048Perungudi landfill fire — A harsh reminder why waste segregation at source is non-negotiable 12045Heritage Watch: Restoration of Chepauk Palace 12040Lost Landmarks of Chennai 12038Sanmar, what Sankar built 12036The peregrinating inscription of Ellis 12034Unheard Voices of Tranquebar – II 12032Prof. Krishnamoorthy Srinivas – a look at this life and his work – II 12026He cared deeply for the Game and the Players 12024Short ‘N’ Snappy