The peregrinating inscription of Ellis

(The late S. Muthiah wrote about the Cornwallis Cenotaph as a peregrinating memorial; this description fits the stone inscription of F.W. Ellis that was fixed on one of the 27 wells that he sank in Royapettah.)

F.W. Ellis is an important figure in the history of Chennai who identified the distinct stream of Dravidian languages. This was in sharp contrast to the Calcutta school of scholars who thought Sanskrit contributed the main stream of Indian languages. As a great admirer of Thiruvalluvar, Ellis had translated 49 verses of the Thirukkural into English, some in verse and others in prose form.

Another important work of his was the sinking of 27 wells to overcome the water shortage in the city in the Royapettah area. But the stone inscription he fixed on one the wells had seemingly vanished and was not available to noted scholar Iravatham Mahadevan. At the time, he was writing about the golden pagodas (coins) minted by Ellis. He told me that the gold coin bore the effigy of Thiruvalluavar and this could have been done only by Ellis, who was then the Treasury Officer in Madras. His argument was that Ellis was an admirer of Thiruvalluvar, and that the proof is available in the inscription on a stone that was engraved on one of the wells.

Having read his Tamil article about the Golden Coin when I was writing about Madras, I consulted him for more information on Ellis and the wells. Unfortunately, the only picture available of the inscription was not clear and Mahadevan asked me to find out more about it. I consulted Dr. S. Rajagopal, former Assistant Director in the Department of Archeology, who said he had seen the stone in the Tirumalai Nayak Mahal, Madurai when he was in charge there. He also told me that the stone had been probably been originally shifted to the Museum in Madras and later to different places and finally to Madurai. 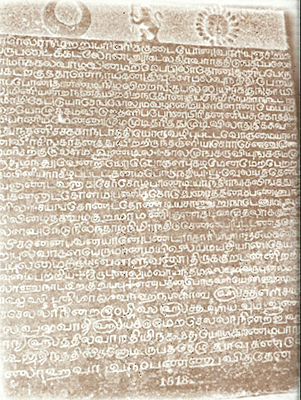 It was in 2004 and as my book was nearing completion that I got in touch with one Dr. Santhalingam, then in-charge of the Madurai Mahal. When I got an affirmative answer regarding the stone, I went to Madurai and saw it in the Mahal museum lying in a corner. Dr Santhalingam got the stone cleaned and oiled so that the writing was visible clearly. Later, it was erected and put up for public exhibition in the Mahal Museum. With the assistance of the Chief Photographer of the Tamil daily Dinamalar, I got a clear picture. When I showed the picture to Mahadevan he was immensely pleased.

Mahadevan told me that Thomas R. Trautmann, Professor of History, University of Michigan, USA, was the biographer of Ellis and would be happy to see the picture. When the professor came to give a lecture in RMRL on Ellis and his Dravidian Proof, Mahadevan introduced me to him and Trautmann, who was equally happy on seeing the picture.

However, Trautmann could not decipher some of the words in the inscription. The entire length of the inscription is in 31 lines and in Tamil, the last line being the date – 1818. In its 14th and 15th lines it has the following in Tamil:

This line Trautmanna could not follow. I told him that Ellis says that the then governor was Hugh Elliot and this is what is written.

In the inscription, after noting Thiruvalluavar as the Divine Poet, Ellis quotes the Kural in the 21st line:

(The constituents of a kingdom are the two waters from above and below, well situated hills and an indestructible fort. Translation by G.U. Pope. This is the 773rd Kural.)

During his next visit to Madras, much later, Trautmann made it a point to mention it in a meeting.

12050Can we grow beyond renaming roads? 12048Perungudi landfill fire — A harsh reminder why waste segregation at source is non-negotiable 12045Heritage Watch: Restoration of Chepauk Palace 12040Lost Landmarks of Chennai 12038Sanmar, what Sankar built 12034Unheard Voices of Tranquebar – II 12032Prof. Krishnamoorthy Srinivas – a look at this life and his work – II 12026He cared deeply for the Game and the Players 12024Short ‘N’ Snappy 12020Our Readers Write