Heritage Watch: The Mahatma moves (temporarily) for the Metro

There are many statues to Gandhi all over the world but to the Chennai-ite there is only one – the statue that has stood at the intersection of Radhakrishnan Salai (Edward Elliots Road) and Kamaraj Salai (South Beach Road) since 1956. It has served as a meeting point, a focal point, a marker and also as an identity for Chennai. Many photographers have waited for the sun to rise behind it so as to click that iconic silhouette. To be sure there is a replica in Kolkata and if we are not mistaken another in Mumbai. But none of these have the background that the statue in Chennai has – the sea it would seem was all along waiting for this crown jewel. 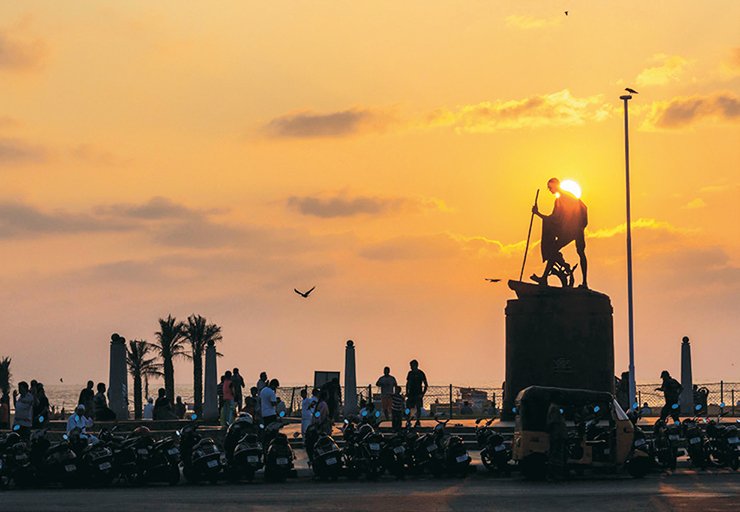 Metro Rail work has now necessitated the shifting of the statue, pedestal, and all. It has been announced that this will be a temporary measure. We hope that is true. Reports vary as to where the statue will be located – some say the shift may be a few metres, others have it that the statue may have to journey elsewhere. Whatever it is, we hope that the city icon will not suffer any damage in the process. We have had instances of ham-handed treatments of other statues in the past. We also look forward to the time when the Mahatma will be back, watching over all of us. Interestingly, the statue of Gandhi in Calcutta too was temporarily displaced owing to metro work in the 1970s in that city!

Adieu Bapu – it is only a temporary parting.

12146Dithering over a Natural Beach 12142MTC’s slew of new perks and services win back riders 12138When the Gandhi statue attracted tax 12128Kalaimagal, the literary Tamil monthly turns 90 12125Representing the Anglo-Indians in the State Legislative Assembly three times 12115Prof. Krishnamoorthy Srinivas – a look at this life and his work – III 12112The Squash World Champions from Chennai 12134Thank you, Donors 12104Short ‘N’ Snappy 12101Our Readers Write