Representing the Anglo-Indians in the State Legislative Assembly three times

Alice Suares was the first lady of Anglo-India in the State of Madras after Independence. Handpicked by Congress Chief Minister Kamaraj in 1957, she represented the Anglo-Indian Community in the State Legislative Assembly for a record three terms, extending up to 1971. Nobody, either before or after her, has had this distinction. In the Assembly she spoke authoritatively on issues pertaining to education, and argued for the need to continue with an English-based education in the State.

Although a strong decoction of anti-Hindi sentiment and Tamil fervour in the State was brewing, she was able to put forth her case that English would be the vehicle for growth for individuals both in India and across the world. At the time, Anglo-Indian schools were quite the bedrock of formal learning in the State,and her views carried weight. She also campaigned for playgrounds, gardens and well-ventilated classrooms in government schools, and urged for more teachers’ colleges and technical institutes to be opened. 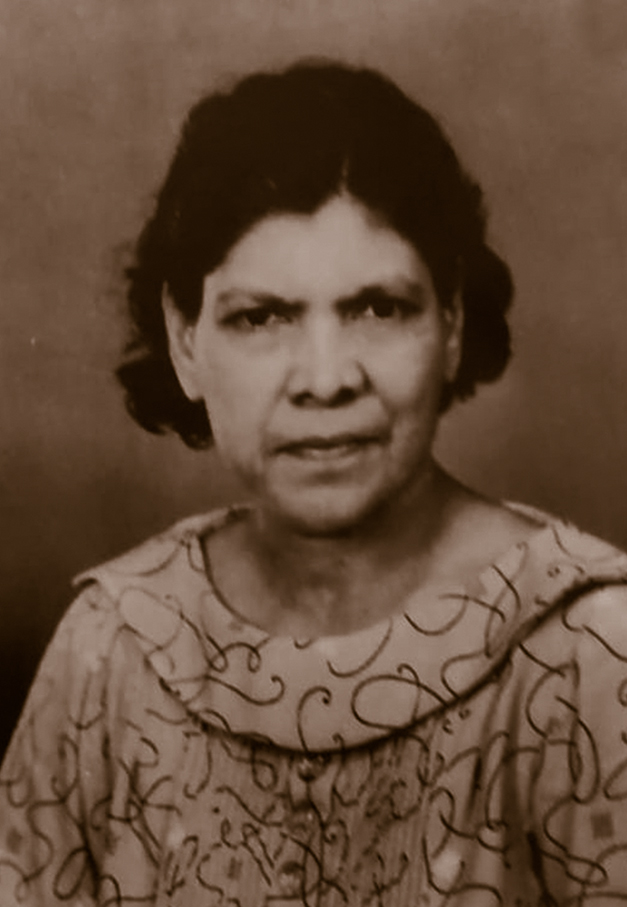 Within the Community and the Church however, Alice was most often known for her role as Inspectress of Schools, one that she discharged for eight years. She herself had graduated at the Queen Mary’s College and had her Teacher’s Training at the Lady Willingdon Teachers’ Training Institute. An astute observer, an author (Peninsular India, a geography book was written by her) and a capable administrator, Alice took her job as Inspectress seriously, and schools across the State would keep their house in order and prepare themselves well in advance for her official visits. It was well known that she would brook no laxity and would not hesitate to record a negative remark if she came across negligence of any kind. She was also on the State and the Inter-State Boards for Anglo-Indian schools, and all these roles converged to make her travel across much of South India. But she was up to it, and travelling alone as a woman did not for a moment deter her from carrying out her duties.

Alice was used to having her bags packed and ready to go. Her husband Thomas was a Railway employee handling freight bookings, and upon marrying him in 1927, her first task was to move to Bellary where he was posted. At Bellary she was active, doing social work in slums, organising funds for the education of poor children, holding night schools for the elderly and improving the lot of the girl child. When they moved to Rajahmundry, she helped establish the Girl Guides in several schools there. She was also a volunteer for the Red Cross (Junior Society) and helped establish its offices at Bellary and Vizag. All this social work helped mould her personality and was to stand her in good stead when she became an MLA. Fortunately, her husband got a transfer to Salt Cotaurs before this time and the family moved back to Madras.

In the Madras Legislative Assembly, she was vocal on issues concerning primary health. She appealed to the government to establish Primary Health Centres in as many places as possible in the State so as to provide health care to even the remotest village. Citing the urgent need for more doctors, she proposed that post-graduate medical education be included in college curriculum, and that doctors serving in far-flung areas be paid handsomely. The government made her a Member of the State Medical Advisory Committee as well as a member of the State Council for the PTA and above all, a member of the Senate of the Madras University.

In all these positions, she acquitted herself creditably. The fact that even after the fall of the Congress government in 1967, her nomination continued for a few years under DMK leaders C.N. Annadurai and K. Karunanidhi, speaks volumes of her ability and the respect with which she was held.

This was a respect that she had earned even under British rule. Being a railwayman, her future husband had to join the war effort in WWI, and for her part, Alice mobilised funds for the cause. She was again active during the Second World War as a member of the committee entrusted to look after the welfare of the soldiers. Four of her sons joined the defence forces and went to the frontlines and for this sacrifice, she was honoured by the British government with a certificate and a medal. The rulers of India, both before and after Independence, knew that if there was one person in Madras who could both rally and represent her community for the greater common good, it was Alice Suares. Not many know that she was in her time, the President of the Madras State Council of the All-India Anglo Indian Association (equivalent to Governing Body Member today, if not more). Besides this, she was on the Executive Committees of the Guild of Service as well as the Catholic Educational Council and a member of the All-India Women’s Association.

Her home in Royapuram was a grand old bungalow that was open to one and all. People would come to her with one problem or another, and she patiently heard their grievances and tried to help them, and they all went back happier than when they came. VIPs too would call on her, from the educational, political, administrative and other fields, and she would be the same attentive and responsive Alice. Her calm and composed manner knew no bounds, and situations of crises often brought out the best of her. Her family enjoyed the best of her during Christmas time, because this was when she devoted herself entirely to her children and grandchildren, and for nearly ten days, they would all fete and frolic together. There would be the extended family dinner with cake and wine and whisky and meat stuffing, there would be music and dance, and assorted gifts for the children from Santa and all the merriment in the world. One day would be a visit to the zoo, one day would be a trip to St. Thomas Mount, another day would be a picnic to a scenic suburb and yet another would be a night on the Marina. While the children would actively plan out and organise the various events, Alice would be the quiet force behind it all, ensuring that everything went well, with each one performing their roles and the family kept happy. She was the grand matriarch, and however busy or high profile her children or their offspring were, they all had to congregate once a year at 41, Arathoon Road, Royapuram. Her wish was their command.

And this was because at heart she was a gentle woman, truly caring for her loved ones and for those whom she came into contact with. She was a person of great integrity (her bank balance was only Rs.5,000 when she passed away in 1976, six years after her husband’s demise), great energy, and above all, great fortitude.

Not many know that her husband Thomas was a widower with seven children – Bell, Hughie, Cuthbert, Roy, Mavis, Hyacinth and Anthony – when she married him. His wife Mary Ann D’Monte died in her early thirties, and so Alice raised the children as her very own from rather young ages. Together, Alice and Thomas added two girls – Colleen and Hazel – to the seven, and what a wonderful family it was! The nine children went on to excel in their careers (from doctors to secretaries to officers in the railways, customs and the defence forces), each in their own way, but that is a story that would take not one, but many a telling.

Alice Suares, that little girl who was born in 1895 in Burnacherry, Cannanore and did her schooling there, and later made it to the big stage, now lives on, in the lives of her grandchildren and great grandchildren, scattered around the world, from India to England to Australia to the U.S.A. And in the memories and tales of all those whom she graciously touched in the four decades of her public life.

12146Dithering over a Natural Beach 12142MTC’s slew of new perks and services win back riders 12106Heritage Watch: The Mahatma moves (temporarily) for the Metro 12138When the Gandhi statue attracted tax 12128Kalaimagal, the literary Tamil monthly turns 90 12115Prof. Krishnamoorthy Srinivas – a look at this life and his work – III 12112The Squash World Champions from Chennai 12134Thank you, Donors 12104Short ‘N’ Snappy 12101Our Readers Write