Get on with it MMM!

The Man from Madras Musings fights shy of blowing his trumpet, but it cannot be denied that over the years he has done his fair bit of writing on the city’s history. A large portion of the credit for this must of course go to old Chief, peace be upon him, for without his gimlet gaze MMM would have scarcely moved a muscle. And so, yes there it is, a considerable bit of writing over the years.

This has had its pluses and minuses. On the former MMM need not dwell for they are quite obvious – the corpus of work has made MMM known. Everyone from army officers to government servants to private individuals make a beeline to MMM when they have a question or two on the city and related matters. MMM enjoys helping them out though he does wish sometimes that these people did some homework before they called on him. The ones that contact him hoping for pearls of wisdom to be available on tap do get somewhat irritating.

Thus it was that just a few weeks ago, MMM had a visitor. He arrived like something out of Sherlock Holmes – the call informing MMM of his arrival was couched in such cloak-and-dagger language that MMM half expected him to be the plenipotentiary of a little-known European state that was convulsed over the loss of a treaty or a signet ring that the heir apparent was always expected to wear on his little finger. When the person arrived at MMM’s doorstep, it was behind several bulky parcels. In fact, it would be no exaggeration to say that the man positively staggered under his load. Dismissing the notion that these packages contained myrrh, peacocks, ivories and apes, MMM bade the man to unburden himself and offered him a seat also. To this the visitor seemed grateful but preferred to remain standing, while the parcels were placed respectfully on the proffered seat.

On being unwrapped these revealed themselves to be rather attractive books, with some wonderful photographs. They were all part of a series to promote tourism in the State, the target audience being those living abroad. It would have been best if whoever had produced these had restricted themselves to the visual element but then as the Chief once famously remarked, there is a writer in everyone and under each picture there was text, of the most ghastly variety. It was this that had caught the attention of a senior bureaucrat. As to why all of that had not been checked in the proof stage MMM does not know but there it was – the books had been printed and then the senior bureaucrat had detected the goofs. The question had then arisen as to who could set these right. The search for a goat had ended with MMM. And so, the junior functionary had hotfooted to chez MMM with the books in tow.

MMM could have said no but then as another (demi)Chief of his once astutely pointed out, MMM can never say no. There was also the matter of State pride. How could these books travel abroad and be laughed over at places ranging from Chattanooga to Cornwall? MMM agreed to get on with it. He then made bold to ask to how much time was available. The visitor stood up, as though to depart in haste. He already had one foot raised. MMM had till evening he said even as he prepared to dodge any paperweight or other object that MMM could fling at his head. A few years ago, MMM would have done just that, but he is now older and wiser and has long realised that assault gets you nowhere. He therefore suggested that the man resume his seat so that some hard bargaining could be done. There were phone calls made, plenty of hushed whisperings went on and finally MMM was given a week. MMM then asked if he could charge for his services. To this there was a long sob story about how everything on this project had gone overboard on budget and so could MMM just do the Government a favour? This MMM was not willing to do either – after all he paid his taxes and plenty of those cesses as well. A rate was agreed. It was backbreaking work, but MMM got plenty of laughs from the errors. When he completed his corrections, which meant rewriting quite a bit, and handed the books over, MMM had only one request – his name was not to be mentioned anywhere in print.

The Hanging Gardens of Chennai

Of the Seven Wonders of the Ancient World, as far as The Man from Madras Musings recalls, only one, namely the Pyramids at Giza, survives. Among the six lost are the Hanging Gardens of Babylon of which we have no visual record. Speculation has been rife over the years as to how they would have looked, from where they hung, etc. For that matter, Babylon itself is a lost city. However, all is not lost. Chennai is after all still surviving and until recently it had its own hanging gardens. Our very own version of that ancient wonder comprised the pillars of all our flyovers being festooned with green shrubs growing out of small receptacles.

That was our Corporation’s way of fighting the poster menace. They had earlier tried to obliterate this problem by giving the pillars a striated finish. That did not work for the poster pasters did not mind the posters being striated as well. They tried tiled surfaces, but the glue worked just as well. There were appeals to the city’s conscience (this pillar is made from your money, would you ruin it?) by way of painted messages. Nothing worked. And then, full blown from Singapore (Chennai’s role model) came this idea – cover the pillars with plants – that way we would be contributing to the greening of the city and also preventing posters from being pasted on the pillars.

Naysayers such as MMM and their objections were brushed aside. There was an answer for every question. Where was the water for the plants – oh that will come from recycled waste. What about the concrete? Well, it has withstood much worse treatment (which is true) and it is unlikely to suffer from the continuing presence of wet mud. And so, the project went ahead at a cost of a few crores, which incidentally is the lowest denomination in public projects. For a time, all seemed to be well. The plants flourished, neighbouring goats were seen feasting on them, and it must be said the foliage was pleasing to the eye. But then there came a day when it would seem the water supply was turned off at the main. The leaves began to droop and the goats, always smarter than the humans, quickly moved elsewhere, perhaps to the Miyawaki forests that are the Corporation’s next favourite scheme for greening the city. Shortly thereafter, the leaves fell off one by one; perhaps they were missing the goats. With that all we now have left are the black receptacles or planters in which the shrubs once grew.

There is however one positive outcome – those pillars are finally poster proof. The plant holders cover them completely. 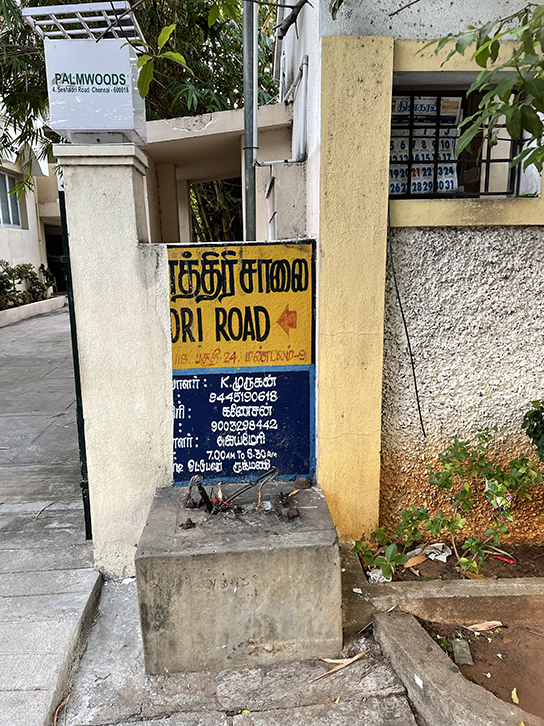 The Man from Madras Musings has seen roads narrowing down owing to congestion but this is probably the first time he has seen a street sign being truncated. He leaves it to the readers to guess the name of the thoroughfare.

12146Dithering over a Natural Beach 12142MTC’s slew of new perks and services win back riders 12106Heritage Watch: The Mahatma moves (temporarily) for the Metro 12138When the Gandhi statue attracted tax 12128Kalaimagal, the literary Tamil monthly turns 90 12125Representing the Anglo-Indians in the State Legislative Assembly three times 12115Prof. Krishnamoorthy Srinivas – a look at this life and his work – III 12112The Squash World Champions from Chennai 12134Thank you, Donors 12101Our Readers Write