The Squash World Champions from Chennai

It was one of India’s finest moments in the sport of squash. For the first time, Indians rose to win not one but two titles in a World Championship. Glasgow 2022 will remain etched in the minds of all squash lovers for a long time to come, thanks to the exploits of Saurav Ghosal, Joshna Chinappa and Dipika Pallikal Karthik, the leading lights of Indian squash. Saurav and Dipika won the mixed doubles title and Dipika partnered with Joshna to annex the women’s doubles title. It was a remarkable effort from these three who had all along in their career been in pursuit of new levels of excellence. Significantly, all of them had their initial grounding in Chennai at the Indian Squash Academy and it goes without saying they have turned out to be prized products of some world-class training there.

It was around the turn of this millennium that ISA took roots, thanks to the visionary zeal of Mr N. Ramachandran, the then Secretary-General of the Squash Racket Federation of India. It was his single-minded drive that saw the emergence of this academy with Malaysian expert Maj S. Maniam at the helm of the coaching. Joined by national coach Cyrus Poncha among others, the plans were well laid out for what was to come years later. Saurav, Joshna and Dipika – all school students then – did not take long to catch the eye. With world level tournaments and championships also coming to Chennai in the aftermath of this Academy’s establishment, young talents like them were soaked in an atmosphere of world class standards of play. It is a different matter that the prized trio, when they grew and then turned professionals in due course, branched out to different areas of training under various coaching facilities, but as they say the ISA was their beloved alma mater! 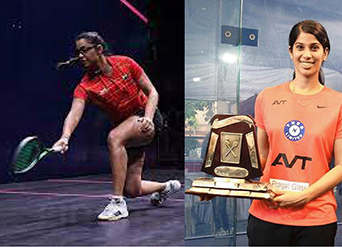 Over the years, Indians have been making splashes in international events here and there. Asian championship, Commonwealth Games, Asian Games, SAF Games and many more have all been conquered areas and with distinction. What remained was the World championship and now even that has been scaled in a way. True, there remains the individual world titles but what better inspiration could the sport have asked for than what Saurav, Joshna and Dipika have accomplished? It must be mentioned here that Joshna (twice) and Saurav have been Asian champions earlier and Dipika the runner up. They are all achievers that way and like true professionals continued to yearn for more day in and day out. Relentless has been their effort and what happened at Glasgow was just the fruit of this trait. Interestingly it was in Glasgow in 2014 that Indian squash, one can say, shot into fame the first time. The Commonwealth Games held there brought to fore the rich talents Joshna and Dipika as they rose to win the doubles gold to give notice of an emerging squash force. Kudos to the resolve of these great women and Saurav too, for retaining their resolve eight years later.

What makes the milestone more significant was the run up to this major event. While Joshna and Saurav, as top ranked players of the world continued to be in touch with the sport at the highest level, Dipika had taken a near four-year lay off so to say. Not since the later part of 2018 did Dipika enter a squash court, let alone play. The experienced player took time off to ponder on her future and as it happened, start a family too. And yes, Dipika in this phase became along with her cricketer husband, Dinesh Karthik, now busy with IPL engagements, proud parents of twin boys! Imagine squash in this midst! But the iron lady did think of a return, ensuring her babies did not miss her one bit. Family support was her strength. She found the hours to sweat it out, gain fitness and tune her squash skills to plunge straight into the highest level of competition. Can there be a better story of grit and glory! Joshna found her winning partner and Saurav too. Incidentally Saurav is also Dipika’s brother-in-law.

Even as the joyful moments sink in deep, these three seniors know there is still more to look ahead. The Commonwealth Games in Birmingham and then the Asian Games in Hangzhou in China are not too far off and there can be more gains there. Needless to say the World championship provided just the kind of tonic to ready themselves for the tasks ahead. All in their thirties now, this year could well help them add a few more jewels to their shining careers. Indeed Saurav, Joshna and Dipika deserve this and more. For they have done so much for the country. No praise can be too high.

12146Dithering over a Natural Beach 12142MTC’s slew of new perks and services win back riders 12106Heritage Watch: The Mahatma moves (temporarily) for the Metro 12138When the Gandhi statue attracted tax 12128Kalaimagal, the literary Tamil monthly turns 90 12125Representing the Anglo-Indians in the State Legislative Assembly three times 12115Prof. Krishnamoorthy Srinivas – a look at this life and his work – III 12134Thank you, Donors 12104Short ‘N’ Snappy 12101Our Readers Write