When the Gandhi statue attracted tax

The Gandhi statue on the Marina is in the news owing to the necessity of having to shift it from its current location to facilitate Metrorail work. One of the few pieces of public art that Chennai can truly be proud of, it was unveiled by Pt. Jawaharlal Nehru, then Prime Minister of India, in 1956, in the presence of the then Chief Minister, K. Kamaraj. The sculptor of this bronze was Debi Prosad Roy Chowdhury, who was then serving as the Principal of the Government School of Arts, which institution having been founded in 1850 is one of India’s oldest. It is today known as the Government College of Fine Arts.

In his monograph on the history of the college written for a book on the Tamil Nadu Music and Fine Arts University, Karthik Bhatt has given a brief profile of Roy Chowdhury –

“Born in 1899 at Tejhat, a part of undivided Bengal and now part of Bangladesh, Roy Choudhury learnt painting from the renowned artist Abanindranath Tagore, a nephew of Rabindranath Tagore at the Indian School of Oriental Arts. He then learnt sculpting, initially from Hiromony Choudhury and later in Italy. Coming under the influence of the Bengal school in terms of style and technique, Roy Choudhury developed a style of his own and became one of the first Indian artists to sculpt in bronze. Roy Choudhury applied for the post of the Principal in the Government School of Arts, Madras, and was appointed in January 1929. Writing in the Swatantra magazine in 1952 in a series titled ‘Life with an Artist’, his wife Charulatha states that there were several prominent personalities such as AMGC Tampoe ICS, Dr. P. Subbarayan, S.V. Ramaswamy Mudaliar and Kamaladevi Chattopadhyaya who were instrumental in his landing this job. It was the start of a nearly three-decade long association with the institution, one that would see several students such as Paritosh Sen, S. Rajam, K.C.S. Panicker, K.M. Gopal and S. Dhanapal learn their craft under his influence and go on to become legendary figures in the world of contemporary Indian art.

His brilliance inspired several students and in the words of Khasa Subba Rao, the editor of the Swatantra magazine, ‘the influence of the School as a centre of inspiration for things artistic had outgrown provincial status and it had acquired the stature of a national institution.’

Choudhury retired from the institution in 1957.” 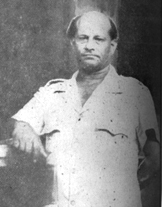 The Triumph of Labour cost Rs. 41,000 while the second Gandhi was contracted at Rs. 60,000. Both were complete by 1958 and supplied. They were praised in all quarters but the Deputy Commercial Tax Officer, Saidapet did not share in the enthusiasm and joy. He sent a demand notice for tax payable on the two transactions, assessing the turnover of Roy Chowdhury to be Rs 1,01,000 for the year 1958/59. In his reply, Roy Chowdhury averred that he was not a dealer of goods, and therefore his transactions could not be considered under the Madras General Sales Tax Act of 1939. If at all, he opined, the two could be considered works contracts and therefore not be liable to sales tax. The CTO did not agree. As Roy Chowdhury had to acquire all the raw material, namely considerable quantity of bronze for the execution, he felt that this was not a works contract but a transaction liable to sales tax.

It is a matter of surprise that not one higher up in Government thought it necessary to intervene. Roy Chowdhury therefore had to seek legal counsel and the petition came up before Justice K. Veeraswami, with noted lawyer G. Ramanujam, afterwards a judge of the High Court of Madras, appearing on behalf of Roy Chowdhury. It was the contention of the Government Pleader that the Court ought to let the CTO decide for himself on the merits of the case and not interfere at that stage. It also reiterated that this was a sale of goods based on a clause in the contract that stipulated that “the sculptor shall duly prepare the design for the pedestal for placing the statue thereon for which no charges shall be payable by Government to the sculptor and the Government shall at its own cost and expense direct and construct the pedestal at the site selected by them within the City of Madras, and that the sculptor shall arrange for the transport of the statue from his studio to the place of installation and have it fixed over the pedestal both done at Government expense.”

But fortunately for Roy Chowdhury, he had in Justice Veeraswami a man who appreciated art and also the effort that went into its creation. A couple of paragraphs from the judgement, issued on April 23, 1962, make for relevant reading –

“Can it be said, in this case, that the petitioner in supplying the two pieces of sculpture effected sales of them, in the course of trade or business in such casts? In my opinion, the answer must clearly be in the negative. The petitioner is a sculptor of repute and according to him, in his affidavit, he does not even pursue the profession as such of a sculptor. After his retirement, in order to satisfy his admirers, he utilises his skill as a sculptor and produces objects of special art, for supply to those who have a taste and value for them. The two casts, in this case, are clearly not articles of commerce or trade. He does not make such casts for purposes of finding a market therefore in general, The requirement of the definition of a dealer, namely, that it must be in the course of business or trade is obviously not satisfied by the two transactions.

In cases like these, as. it seems to me, one or two general tests to find out whether the transactions sought to be taxed are in the course of trade or business and amount to sales for purposes of the Madras General Sales Tax Act, 1939 or 1959, may perhaps be thought of. There may be a great painting which may be worth several thousands of rupees on account of the special art, beauty and conception. In such a case the value being not for the paper or canvas but for the art, this may serve as a test of the painting being a product of artistic skill or genius free from commercial approach. Another test, or way of looking at the problem, may be to see whether the articles produced has such a general market or it will be useful or valuable only to the person who places an order for its production. Judged from those tests, and there may be other tests, I think, the two bronze casts supplied by the petitioner were certainly not the subject-matter of sales as such, as defined under the Act. Both on this ground and on the ground that the contracts entered into for their production and their supply were not in the course of trade or business of the petitioner, I hold that the petitioner, in respect of these transactions, was not a dealer and that the two transactions were not sales within their relative definitions in the Madras General Sales Tax Act, 1939.”

He also ruled that the plea that Court ought not to interfere did not hold, as the CTO had made it clear that he intended to levy sales tax. The Court ruled that the demand for sales tax could not apply as the entire transaction was neither a sale and nor was Roy Chowdhury a dealer as defined by the Act. With that the demand was dropped. Today, Roy Chowdhury’s works in Chennai, Kolkata, Delhi and elsewhere are all considered works of art as Justice Veeraswami rightly interpreted. That it required a judgement of the High Court for the Sales Tax authorities to consider them so speaks volumes about our bureaucracy.

12146Dithering over a Natural Beach 12142MTC’s slew of new perks and services win back riders 12106Heritage Watch: The Mahatma moves (temporarily) for the Metro 12128Kalaimagal, the literary Tamil monthly turns 90 12125Representing the Anglo-Indians in the State Legislative Assembly three times 12115Prof. Krishnamoorthy Srinivas – a look at this life and his work – III 12112The Squash World Champions from Chennai 12134Thank you, Donors 12104Short ‘N’ Snappy 12101Our Readers Write