Last fortnight we published the first section of this extract, taken from the Grand Gazetter (sic) of Exeter. That was on the White Town, or Fort St George. The second and concluding part deals with old Black Town, located as it was just behind the Fort and which in the 1760s was demolished to make way for an Esplanade, which in turn made way for the High Court and the Law College in the 1880s. This description of Black Town is therefore of a settlement of which there is no trace now. The account seems to be based on three different sources, who wrote of old Madras at different times – Ensign Thomas Salmon (1699), Charles Lockyer (1702) and Captain James Hamilton (mid 18th century).

One of the notable aspects in the description below is the town wall, which seems to have had only five gates as opposed to the usually documented seven. The Cooum was prone to flooding then but it also seems to have had the problem of the sand bar at its mouth, which continues to plague it. The Island was not yet a military establishment and seems to have been pasture. The Armenian Church and the Town Pagoda (the Chenna Kesava Perumal Temple) are mentioned. The pagod outside town is the Mallikarjuna Swami temple now in Lingi Chetty Street, which was then not within the wall. The streets of Old Black Town from this description seem to have been much better than those in the Chennai of today! The account notes with some wonder about the Indian tendency to bathe several times a day, which the English, who rarely bathed in England, must have considered odd. Devadasis too get their fair space. San Thome and St Thomas Mount are mentioned as are the proselytising tendencies of Catholic priests. The demand for cow dung seems to have been insatiable. Of greater interest are the details of goods in demand for import and export. The city seems to have been fond of its alcohol. Oh yes, a couple of other things – water was scarce, the weather was bad, and then, as now, we lived in religious harmony.

The Black Town, by much the largest, is so called because it is inhabited by the Gentoo [Indian pagans], Mohammedan, and Indian Christians, viz Armenians, Portuguese, etc. who each have a church or temple. ‘Tis more than half a mile in composition. Has brick walls 17 feet thick on landside with modern bastions, a river on west, the sea on east, and to north a canal cut from the river to the sea, which then serves as a Moat so that Madras might be reckoned a strong town where the Garrison is answerable to the fortifications; but it consists of but 100 men 1/3rd of whom are Topazes or Portuguese Indians. The river falls at half a mile distance into sea; but before the wet season the bar is cut to widen its passage, else it would overflow the country. It runs thus with a great stream two months a year; after which the bar closes of itself and forms a peninsula three miles round, which feeds a number of sheep, hogs, cows; but the soil is so poor the cattle would starve had they no other sustenance. The town has five gates, two of which are opened anytime of night for unsuspected passengers, but the other three never after 6:00 o’clock. The streets are wide, straight, paved each side with brick; but the middle is sand for passage of carts, etc. Where are no houses, there are causeways planted with trees ever verdant; and by its situation betwixt its river and the sea there are few towns so pleasant, or better supplied. But except a few brick houses, the rest are sorry houses of clay and thatched. Those of the better sort of Indians are of the same materials and built in one form with a little square in the middle, from which they receive all their light. A stranger seldom enters farther than the little sheds, supported by pillars, before the door, where they sit cross legged morning and evening, to transact business. 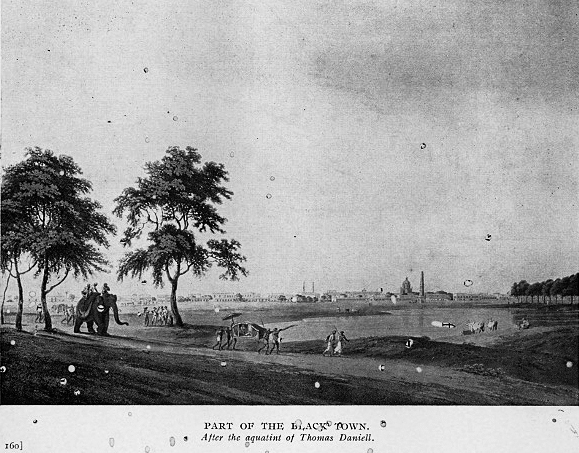 The great streets of the bazaar are crowded with people; and though the houses are so small, they are thronged, 6 or 7 people sleeping in one little room on a floor mat; yet are they generally very wealthy and all very neat, washing themselves several times a day. Here is an Exchange, an Armenian church, and a pagod with chapels for every tribe. The lesser ones, supported by pillars have obscene figures carved on the walls, and monstrous images on the outside. Abundance of singing women are devoted to the service of the pagod very young, and spend part of their time in singing anthems to the idols, and the other part with their gallants. They have another pagod without the town. Besides this Black Town, several neighbouring villages [which were purchased of the King of Golconda] where abundance of rice grows, are under government of the East India company, and yield it a considerable revenue. They have also a house and garden on Saint Thomas Mount 7 or 8 miles to west of Fort Saint George, 6 northwest from Saint Thomas town. There are two mounts. The avenues and sides of the greater are full of houses belonging to Portuguese, Armenians, and especially to the English. When European ships are sailed from Madras harbour, half the Gentry go to rusticate several months in this place.

There are gardens for half a mile together beyond the Black Town, planted with mangoes coconuts, guavas, oranges, etc. The English burial ground without Town makes a good show, the tombs being erected in lines, and decorated variously. The others have their several burial places west of Black Town; and there the English have their kitchen and flower gardens. Powder is made for the Garrison in an island a gunshot from town. The chief revenues of the company arise from customs of 5 percent on goods imported and exported by sea; land custom of two and a half percent on cloth provisions, etc, anchorage passes, coinage, etc. Duties altogether are very considerable; for the mint alone brings in about 1000 pagodas a month. Other particular duties are too many to be here specifying. The inhabitants within the companies bounds have been by Mr. Lockyer computed no less than 300,000 souls whom 6 or 7000 Moors; But Hamilton allows those of the towns and villages to be no more than 80,000 and of them but 500 Europeans. They trade to all parts east of the Cape of Good Hope; but the greatest ships use the Mecca, Persia and Surat markets, with Bengal and China commodities, and touch by the way on the Malabar coast for pepper Cocoa coir, and drugs, the produce of that coast. The European goods which here sell best are lead, wine, beer, ale, cider, cheese, cloth hats, fine ribbands, gold and silver lace thread and worsted stockings, flintware, looking glasses, light coloured wigs, stuffs for coats with trimming, cases of spirit, cherry brandy, case knives, tinware, tobacco pipes, haberdashery. Returns are made to Europe in all the product of the Indies, particularly cotton cloth and muslins which are cheaper here than at Surat, but dearer than in Bengal. A very high surf here breaking sometimes a great way from shore. English boats are of no use for landing or shipping goods; therefore masula are employed being large flat bottomed, ill shaped boats not nailed but sewed together with coir twine, which makes them so pliable that the planks never part. The inhabitants are healthfull, and of ruddy complexion, though it is excessive hot 4 or 5 hours a day, but these are indeed succeeded by cooling sea breezes; and they are much refreshed by bathing, and their delicious fruits. Here are some chariots and chaises; but horses are dear, especially Persian stone horses which are sometimes valued above 150 pounds. The country people often ride on bulls; buffaloes are used in carts and tillage; and great herds are kept for milk with which the markets are plentifully supplied. Cow dung is the firing and brought by way of toll from the country pagans; a prerogative which the Dutch on this coast could never obtain. No less than 30,000 of them are employed in such monopoly of cow dung.

Captain Hamilton says this is one of the most incommodious situations, because the raging sea often threatens destruction by inundations as does the river in rainy season; because the river, which is salt, obstructs all fresh springs so that there is none fit to be drunk within a mile; because it is so hot from April to September, that where it not for the sea breezes it would not be habitable. He adds that the diamond mines being better weeks journey off, they are pretty plenty here; but that few large ones are brought to its market since that great diamond which was sent to England by Governor Pitt. Lockyer says the brahmins here divert themselves, as our boys do come up by letting up paper kites; and there’s a very large one, painted and decked with tassels, and streamers of died paper and muslin. The people call it the pagoda, or God kite, and salute it accordingly when they see it in the air. A piece of thin bamboo across the forepart makes such a humming noise in the wind, that it may be heard one mile and a half off. We conclude with an addition or two from Salmon. The Moguls generals, says he, sometimes visit this place, demanding tribute or presents from the governor, which he is obliged to comply with; for though he might defend himself against these forces, which consists chiefly of horse, yet are they able to ruin the company trade, and cut off their communication with the country, and though the English purchased this settlement as above said, the Mogul afterwards making a conquest of the country, he looks on himself entitled to this as well as the rest of the towns in Golconda Kingdom. He observes that a universal toleration reign here; no disputes about religion, or riots, or tumults disturb the peace; and robberies are here scarce ever heard of. The unhappiest people, says he are the company’s soldiers, who are prisoners for life, never suffered to stir out of town, and whipped at the post for every trivial offence; though it must be confessed the pay is good considering the cheapness of provisions, etc. As to to the two Protestant divines above mentioned, he says that converting the Indians seems not any part of their business; this is left entirely to the popish missionaries who practice even upon the slaves of the Protestant inhabitants, and make good Catholics of them.