“It is a one-sided love story. Chennai is my home, but it never accepted me,” says a 20-year-old trans man, Krishna Karthikeyan. “I was just a young boy who everyone thought was a young girl,” he adds.

Many non-binary and homosexual people in Chennai are still inside their closets, despite recent pro-LGBTQIA++ (an inclusive term that includes people of all genders & sexualities – Lesbian, Gay, Bisexual, Transgender, Queer, Intersex, Asexual, with the + indicating other identities not covered by the initials) reforms which include the ban on conversion therapy, the penalty set down for law enforcement officials against the harassment of the queer people, and the promise of free legal aid.

25-year-old Anna (name changed) from Vadapalani is a gay woman who has come out to almost all her friends. However, she has been tight-lipped about her sexual orientation to her parents. “I just have a feeling they will not take it well. I am waiting till I am financially independent before I say anything,” she shares.

If the present looks this bleak with the reforms, imagine how the past was for the queer community. “It [LGBTQIA++ activism] was unheard of thirty years ago,” says Sunil Menon, the first-ever openly gay man in Chennai. He used to tell everyone he was doing social work when they wanted to know what he did for work, thus skirting around topics about his sexuality. “People used to say that homosexuality was unacceptable, illegal and not based on our culture,” he recounts, stating that this would drive the community up against the wall. Menon came out as a gay man in 2000, and it took nine years for Section 377 to be decriminalised, legalising consensual homosexual activities. However, decriminalisation of homosexuality, unfortunately, did not end the violations against the community by the public and law enforcement officials. Apart from being chased away from their families, members of the queer community underwent physical and mental torture through conversion therapy. “Families take their children for conversion therapy if they come out as homosexual or non-binary. Some close-minded psychologists try to brainwash these children that being queer is against nature. Moreover, they also subject people questioning their gender or sexuality to electric shock and hypnotherapy,” illustrates Cauviya Madhiyazhagan, a queer-affirmative psychologist from Kilpauk. Today, a medical professional practising this pseudo-scientific practice will have their license revoked by the state.

It took 13 years for this inhumane practice to be banned since the decriminalisation of Section 377 by the Madras High Court. “There are social evils like sexism and caste oppression which only dilute the issues I face,” remarks Krishna, pointing out that his human rights are secondary.

The fight for the rights of the queer community has its roots in a New York bar called Stonewall Inn back in 1969. Protests ensued when police raided the bar and arrested some people belonging to the community. The push-back gave a global voice to the community, which protested against the discrimination they face in society – thus giving birth to the famous Pride Parade held the world over in the month of June. Chennai saw its first Pride Parade in June 2009. 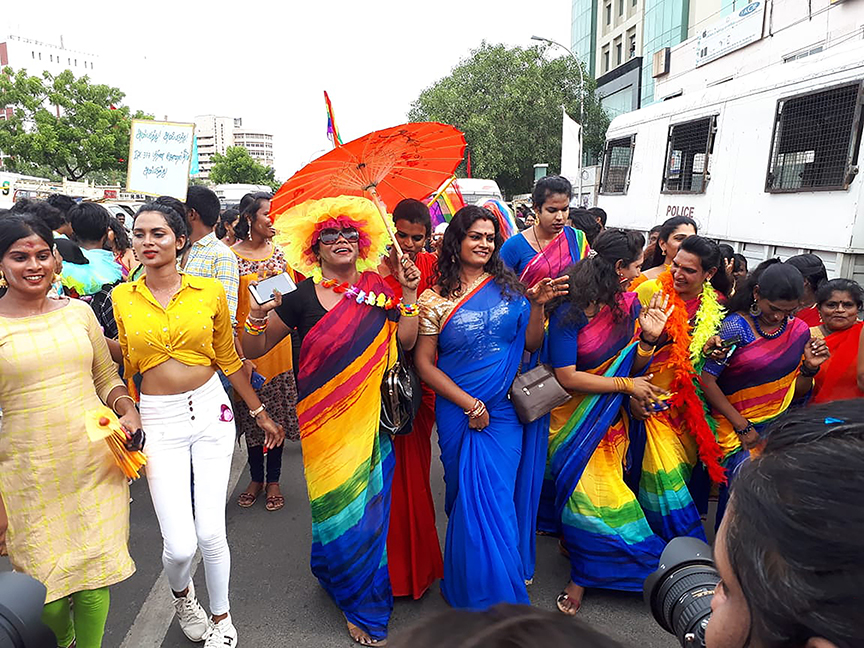 Pictures from the 2019 Pride Parade in Chennai. Courtesy: the NGO Sahodaran.

When asked what pride means to the Chennai LGBTQIA++ community, they reply that it is self-respect. The Pride Parade came to be known as suyamariyathai padai, and the first one was held at the Marina Beach. LGBTQIA++ members dressed up in festive attires joyfully bursting with pomp and show, and proudly wearing the badge of their identity; they marched through the city roads, protesting discriminatory and bigoted practices like conversion therapy. Notably, they also raised a call for proper HIV testing for gender and sexual minorities. HIV was rampant in the community in those days, and they faced harassment in counselling sessions. A 2014 study conducted by the National Institute of Research in Tuberculosis and Sahodaran (a Chennai-based NGO working for the welfare of the LGBTQIA++ community) found that their privacy was violated in the government-run sexually transmitted infections (STI) clinics, and medical personnel harassed and ridiculed them due to their sexual identities. This discrimination drove many to alcohol and substance abuse. The study also shed light on the gender and sexual minorities suffering from depression because people did not accept them when they came out. However, the awareness about the community started rising in the city, thanks to technology. There is no formal curriculum about the community in most of the educational institutions in Chennai.

“Social media and international television shows are making people aware of various gender and sexual identities,” opines Cauviya, adding that many people in Chennai are coming out boldly. Moreover, the pandemic-induced boom in digital media has speeded up awareness.

Even though the digital media boom during the lockdown(s) gave binary and hetero people the time and space to educate themselves, the queer community struggled with growing mental health issues. Imagine, if you will, being locked inside a cupboard rather than a home throughout the lockdown – that palpable, nigh unendurable sense of suffocation is what the queer community experienced during the curfews. “When there is no safe environment for a person to express their identity, it leads to suffocation, leading to anxiety and depression,” elucidates Cauviya.

“I was depressed when I was eight years old. I was made to think that something was wrong with me. But it felt alleviating when I finally came out,” remembers Krishna. The parade could not happen during the pandemic. Many queer people in Chennai were saddened because that was the only place they can be themselves unabashedly, informs Cauviya. Last month, however, much to the delight of the community, the parade took place on June 26 in Chennai. 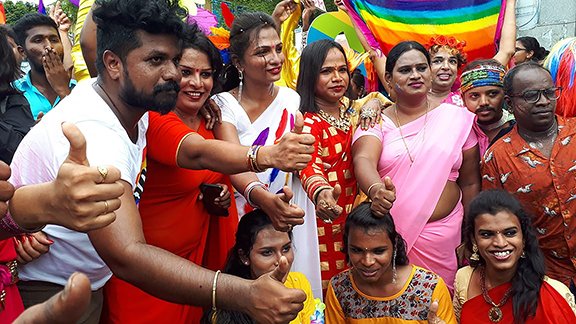 Awareness and a few bold moves are altering current policies to provide equity to gender and sexual minorities in the city. The landmark judgement that banned conversion therapy in the state came in the wake of a same-sex couple whose relationship was being oppressed by their parents. Justice Anand Venkatesh admittedly underwent psychoeducation to tackle his ‘ignorance and prejudice’ and understand same-sex relationships better. While addressing this case, the court gave significant orders to various sectors of the society to bring more inclusivity to the state’s queer community.

The curricula of educational institutions must include factual information on the LGBTQIA++ community. The student counsellors appointed in the schools and colleges must be queer-affirmative. Also, health workers, law enforcement personnel and the members of the judiciary must be sensitised towards handling issues related to the queer community ensuring non-discrimination and inclusivity.

Although the courts have initiated the reforms, they are yet to be implemented on the ground. It will take time and effort to translate intentions into actions. The need of the hour is to introduce equitable infrastructural amenities, such as gender neutral restrooms in public and private spaces. But it is appreciable that the courts have asked NGOs working for queer rights to bring about awareness programmes for various sections of society, and the future is hopeful.

After all, this is the story of people in Chennai. They could be donning many roles in society – doctors, dancers, and sex workers, with many aspirations, accomplishments and struggles. The government and society have come a long way to give them some benefits. But one cannot deny the ‘otherism’ they face despite the reforms. They are part of the LGBTQIA++ community, but they are much more than that. As much as they want equity, they also long for people to not bat their eyes at their gender and sexuality.

12339The buck never stops on the Buckingham Canal – ferry services are the latest 12337City auto drivers push forward in demand for State-sponsored app 12328The Rise & Spectacular Fall of Square D 12323Sivasankari, as seen by Sivasankari 12316The Man who lived in Luz House 12312Taking the Neuroscience Movement forward 12308Dinesh Karthik’s Never-say-die Career – An Inspiration 12302Brown paper packages tied up with strings