Concluding part of series on Prof. Krishnamoorthy Srinivas, his Life and his Work – VI.

VHS-CARES (Centre for Advanced Rehabilitation Services) is a project sponsored by T.S. Srinivasan Charitable Trust, established in August 2010. It is an inpatient-cum-day care facility managed by the multidisciplinary team. After comprehensive assessment of the patient, the family meeting to include the patient, VHS-CARES team and the informal caregiver (often a close family member) is scheduled. The family is empowered when they get an insight to the patient’s problem, the management plan, with emphasis on the psychosocial-sensory and motor issues. Caregiver education and gradual transfer of responsibility to the caregiver helps to ensure home-based care after discharge.

A robust referral system has been established at VHS-CARES with the departments of Psychiatry, Medicine, Neurosurgery, Paediatrics, Diabetology and to the biochemical and ECG labs. The patient, on discharge is handed back to their regular family doctor or the primary health centre, with well documented discharge summary and direct verbal communication when needed.

Maximising Ability through Comprehensive Heathcare (MATCH) was an important research project conducted by TINS-VHS and VHS-CARES. The paediatric wing of the project was in collaboration with SPASTIC Society of Tamil Nadu (SPASTN). The geriatric wing was an assessment of health and wellness in the above 50 years age group in the community and in old age homes. The T.S. Srinivasan Institute of Neurosciences and Rehabilitation, VHS, sponsored MATCH. The unique ‘Medical Aid Plan’ of VHS Hospital was sponsored by the Deepa Krishnan family.

What must be said of the early orations was that Srinivas would start looking for the next orator as soon as one oration was over, so that there was no break in the continuity of this prestigious annual event to which the scientific community in India and abroad looked forward. The elite of the metropolis participated enthusiastically on the oration evening hosted by the Srinivasans to match the oration. For the early 5 orations, Srinivas invited his mentors abroad, professors who he knew well and whose caliber of oration he had no doubt about. 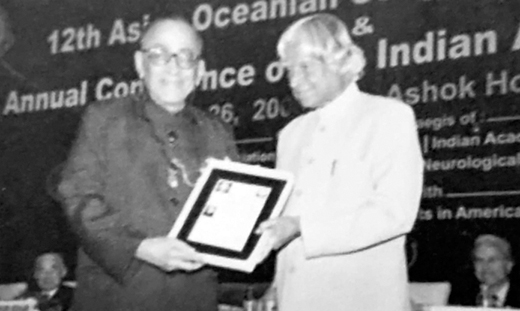 The Neurology department team would be at the venue 3 hours ahead of the oration. Prof. Srinivas would pace up and down, crack an occasional joke to ease his state of tension combined with euphoria. When the guests arrived, he would greet each one of them personally by name, and introduce them to the hosts, where required. From the small British Council Hall on Mount road, we moved to Adyar Park hotel by the 5th T.S. Srinivasan oration. Lalitha Rai, the Event Manager and her team from Marundeswara, came into the picture as the event grew in proportion with workshops and conclaves engaging larger numbers and complex arrangements. The first T.S. Srinivasan oration was by Prof. Bryan Matthews in 1980 and it continues from then on.

Prof. Srinivas was overwhelmed by the sustained involvement of the T.S. Srinivasan family in taking the Neuroscience Movement forward. On the occasion of the 35th T.S. Srinivasan Oration, Mr. Venu Srinivasan, Chairman of TVS Motor Company Ltd. wrote in the commemorative volume:

“Prof. Srinivas, a friend of our family, has steered the effort of the T.S. Srinivasan oration with charm and grace. Under his guidance and ably supported by Dr. E.S. Krishnamoorthy after his return to India, our effort has developed strong branches.” The T.S. Srinivasan Neuroscience Movement was enshrined in India’s premier Neurosciences institution, National Institute of Mental Health and Neurosciences (NIMHANS), Bengaluru in order that the movement achieves its full international potential in February 2015.

Prof, Krishnamoorthy Srinivas was a true pioneer in the field of academic neurology in the community, in India and his unique approach to his profession, family and friends makes the author ‘Celebrate Srinivas’, the title of this biography. To end this review of the long journey in the growth of an institution, one must go back to what Prof. Currier had said, “Academic neurology combines the beauty of teaching young people, the pleasure of research with its occasional small discovery, and the satistaction of patient care, all in the context of that most interesting portion of medicine, the study of the nervous system, the queen of the arts. It is best done in a smaller setting. What you will in leading your small department is one of the world’s most splendid and rewarding jobs. You will be loved, respected and honoured and probably more than you deserve.” which truly echoes Prof. Krishnamoorthy Srinivas’ joyous experience of several years. – (Excerpted from the book Tusitala, Celebrating the Life and Work of Prof. Krishnamoorthy Srinivas. Our thanks to his wife Padma for graciously giving us permission.)

12339The buck never stops on the Buckingham Canal – ferry services are the latest 12337City auto drivers push forward in demand for State-sponsored app 12335Not “Others” 12328The Rise & Spectacular Fall of Square D 12323Sivasankari, as seen by Sivasankari 12316The Man who lived in Luz House 12308Dinesh Karthik’s Never-say-die Career – An Inspiration 12302Brown paper packages tied up with strings