The latest in the never-ending saga of paper pushing on the Buckingham Canal is the plan from the State’s PWD to the Inland Waterways Authority of India (IWAI) to ‘resume ferry services on the canal on an experimental basis to explore tourism potential.’ Yes, we are quite sure that tourists would want to be ferried on the canal, but certainly not in Chennai, which is where this plan is proposed to be implemented. It is high time that the State Government and the IWAI recognise that the canal, if it is at all to be revived within the city, is going to need not piecemeal projects but a mega solution that will involve the MRTS, the Chennai Metrorail, the TNUHDB, the CMWSSB, the PWD, encroachment removal, and rehabilitation schemes all along the stretch within the city. It will also involve dismantling some major installations that have come up in gross violation of the canal. Else, all such proposals are only eyeball-catching announcements that will remain on paper, or worse, if implemented, add to the disaster.

A closer reading of the latest proposal shows that the real reason for mooting such a scheme is something else altogether – it is to get approval from the IWAI for constructing a bridge across the canal to connect OMR (Rajiv Gandhi Expressway) and ECR (Muthamizh Arignar Kalaignar Karunanidhi Salai) to reduce traffic congestion. At present, all constructions across national waterways, and yes, our canal is one too, require a green signal from the IWAI. And what better way to get that done than to throw in a nice line or two about revival of ferry services! It makes the whole proposal green. 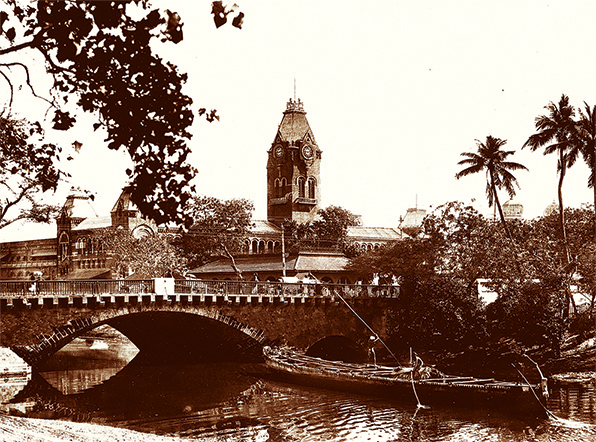 Is it even possible to think of ferries on the canal (last seen in 1965)? Not really, not at least within the city. It is time that the State Government wakes up to this reality. Time and again it has been the practice of those in power in the State and those from the State at the Centre, to make such pronouncements and then forget all about it. With encroachments all along the canal, a practice that has been allowed since 1968, the waterway has shrunk abominably. And then, in the 1980s, the MRTS had its columns sunk right on the canal bed, thereby hindering flow, creating a permanent mosquito menace, and damning all possibility of navigation in perpetuity. Now with plans afoot for the Chennai Metrorail taking over the MRTS, the columns are here to stay, whether environmentalists like it or not. You cannot hope to win against a project that is a ‘progressive solution for the future’ can you?

The canal is caught in a vicious cycle. Earlier this year, the IWAI informed the Courts that it could not take up any work on the canal since 2015, as encroachments had not been cleared by the State Government. The Court then ordered the clearance which the State Government then rather reluctantly took up. The rehabilitation of those residing in the encroachments was ham handed to say the least and they were expected to move to far away, with no access to their place of work. At least one person committed suicide and then came the assurance that those displaced would be accommodated in the Tamil Nadu Slum Clearance Board (it now calls itself the Tamil Nadu Urban Habitat Development Board, but its function has not changed) tenements built right along the canal! And so we are back to where we started – these housing projects along the canal are as much part of the problem as are the MRTS pillars.

In conclusion, there is no easy solution to the Buckingham Canal. What is required is a mega plan that will involve all stakeholders including those who have settled along the banks across the years. Implementing that will require enormous political will and continuity across regimes. Are we capable of that? Otherwise, all talk of ferries will remain pipedreams.

12337City auto drivers push forward in demand for State-sponsored app 12335Not “Others” 12328The Rise & Spectacular Fall of Square D 12323Sivasankari, as seen by Sivasankari 12316The Man who lived in Luz House 12312Taking the Neuroscience Movement forward 12308Dinesh Karthik’s Never-say-die Career – An Inspiration 12302Brown paper packages tied up with strings