The Man who lived in Luz House

It was the name engraved on yellowing marble that called out to me.

“Luz House,” the very name had gravitas, a certain ring to it. My errand was in Baliah Avenue, only a few steps away from this landmark address in Mylapore. I had little time to linger. Still, the old-Madras style house sign – understated and elegant – made an impression on me. Was it an old house of commerce? Was it connected to the Luz Church nearby, or was it simply someone’s residence? The answer, I discovered, was buried in layers of colonial history.

Once Vasco Da Gama had discovered the sea route to India,merchants and missionaries from Portugal routinely set sail to countries in Asia to scope out the possibilities. In 1500, a ship hugging the Indian coast, on its way back to Lisbon, was buffeted by a hurricane. Legend says that the hapless mariners were guided to safety by a mysterious “luz” (Portuguese for light and pronounced “luce”). They dropped anchor in Madras and followed the light inland,till it vanished into the woods of Mylapore. The Portuguese built a church in 1516, right around that area, and dedicated it to Our Lady of Light. A settlement developed around the church. By association, many buildings in the area would be called“Luz this” and “Luz that.” But the Portuguese lost their early gains, and the British later became prominent in the region. 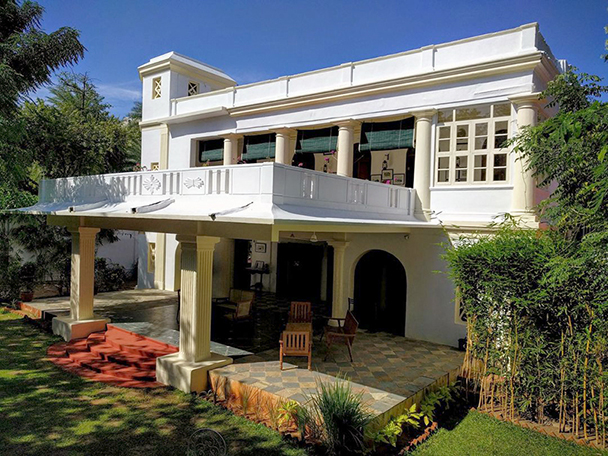 All pictures used in the article are courtesy Buchi Babu family.

In the 19th century, a prosperous Indian in the British Era, Mothavarapu Dera Venkataswamy Naidu, bought some twenty acres of land in this Luz area of Mylapore. A dubash or interpreter-cum-middleman, Naidu who had grown rich by facilitating trade between local sellers and British buyers for Parry &Co., invested his money in real estate in the burgeoning city. He later built the Luz House, the portico of which “provided parking for six Mercedes Benz Cars,” and was “indeed a showpiece,” according to a biography of the family.

Luz House had some impressive acreage which was put to good use by his sports-loving descendants. The eldest grandson, born in 1868, would play cricket, with his buddies and his brothers inside the vast compound, “between the two mango trees in front of the main portico,” according to the family lore. Venkatamahipathi Naidu,better known as Buchi Babu, would go on to lay the foundation for locals to beat the British at their own game of cricket. 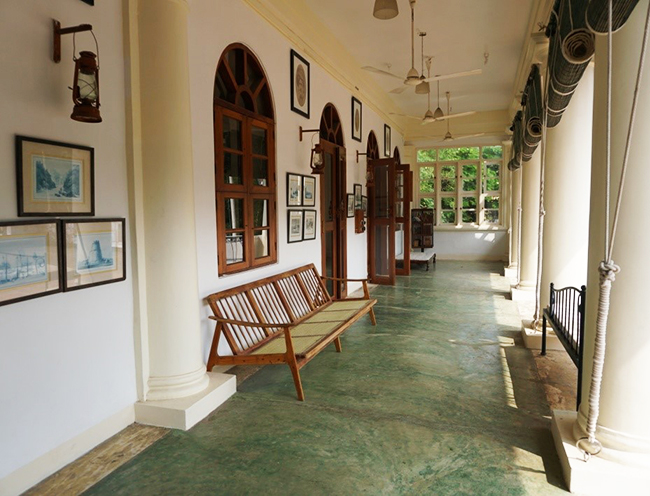 In 1888, Buchi Babu started the Madras United Cricket Club. He built a homegrown team to challenge the Europeans-only Madras Cricket Club, (MCC), based inside the grounds at Chepauk Palace. When the MCC folks sent a match invitation,Buchi Babu accepted, on the condition that his team would dine inside the pavilion, which, till then, was off bounds to Indian players. The Madras Indians played commendably, and the match became a fixture in the city’s sports calendar. With that, Buchi Babu set the ball rolling for the future of cricket in Madras.

The Buchi Babu Memorial tournament, which began as championship for local teams in 1909-10, a year after his death at age 40, later became an all-India invitation tournament, writes V. Ramnarayan, author of Mosquitos and other Jolly Rovers. In the month of August, when the monsoon stops play in most of the Indian subcontinent, a relatively dry Chennai was the ideal place for cricket teams to congregate. The tournament drew crowds and a generation, or two, followed the matches in the sports pages of The Hindu.

Few matches have been met with as much anticipation as the one between Associated Cement Company (ACC) and Chennai club side Jolly Rovers in 1971-72, Siddarth Ravindran writes in his essay “A Madras Classic” for espncricinfo.com. The reason: Sunil Gavaskar, hero of India’s memorable series victory in the West Indies earlier that year was turning out for ACC. The Little Master had amassed 774 runs in his debut series and inspired the calypso song with the memorable refrain “We couldn’t out Gavaskar at all, not at all.” The Madras crowds could not wait to see this hero in action – the city got its television broadcasting station only in August 1975.

A surging crowd showed up to watch Gavaskar bat at the Loyola College ground, but this was clearly not the “knowledgeable (non-partisan) Chennai crowd” we hear so much about. Early in the innings, when one of the best local fielders dropped Gavaskar, the crowd hooted in delight, Ravindran writes. The umpire recalls turning down a straightforward appeal for leg-before because the crowd might bay for his blood. When Gavaskar finally got out at 75, the crowd booed the fielder for taking the catch. Only the Little Master applauded the man before retiring to the makeshift pavilion, a viewer recalls. After that, the crowd vanished in a trice.

The crowd’s behavior that day was an early portent of things to come. Cricket franchises would arrive and demand shifting loyalties and partisanship. A new breed of fans seems happy to oblige – for instance, a star-struck city would take M.S. Dhoni to its collective bosom even as the former captain eliminated local players from the Chennai Super Kings team. The Indian Premier League tournament would eat into the cricket fan’s appetite for domestic cricket. The Buchi Babu memorial tournament was last played in 2017.

In that decade when the tournament came to a standstill,a renovated Luz House – after some forty years of being vacant – shaped up to be an event venue for select gatherings, photoshoots, and the like. It must be noted that the present-day Luz House is just one of the three buildings – not the main one – that once stood inside a vast compound. Pictures of Buchi Babu and his sporting clan are on permanent display on the ground floor of this renovated house, but most event-goers are likely to see the old photos, as part of the backdrop, atmospheric and quaint. 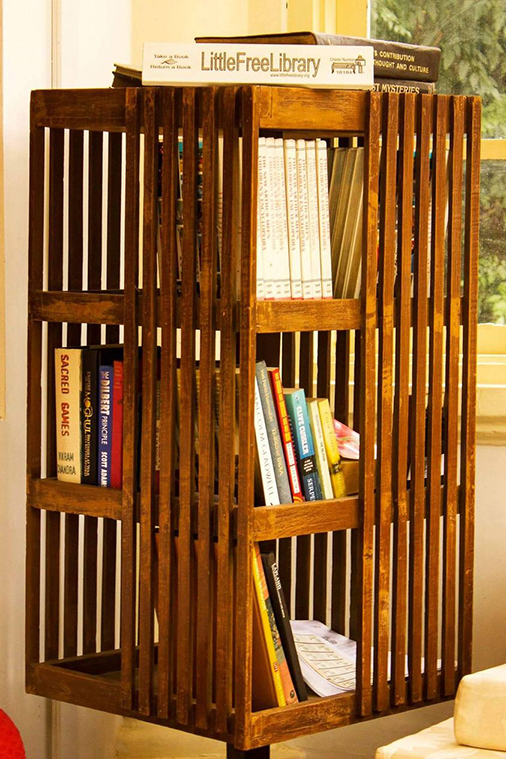 Year around, the compound is home to a Little Free Library, a popular book exchange. All over the world, readers take a book or leave one at this volunteer-run library, which is often nothing more than a wooden bookshelf. There are some 900,000 Little Free Libraries in the world, but the one at Luz House is special because readers can linger on the premises and read – on days when the venue is not booked for an event. Booklovers, with inquiring minds might notice the sepia pictures of sportsmen and read up about them – or not.

Luz House is not too far from Baliah Avenue, named after Buchi Babu’s second son, who also grew up to be a cricketer. Don’t ask how a passerby will know who is being commemorated here: the old paunchy Tamil actor Baliah, who played Hemanatha Bhagavathar in that classic Tiruvilayadal, or cricketer M. Baliah, who played a fine knock against the Marylebone Cricket Club when they toured India under Douglas Jardine (of the Bodyline series fame) in 1933–34. There is no historical marker here. Close to the Luz House, there is a street named after Buchi Babu’s wife Bangaru Ammal. The family’s connection with the old neighborhood is still alive.

But what of Buchi Babu, the Father of South Indian Cricket, himself? Recall that his ancestors owned land in different parts of the city. Somewhere in Triplicane, another old Chennai neighborhood, there is a street named after the Naidu patriarch – Dera Venkatasamy. And there is another street nearby,named after Buchi Babu. To the average passerby, it may not be apparent who is being commemorated, because there is no marker to ­distinguish our Buchi Babu from any of his other namesakes. Considering that, among the Telugus, Buchi Babu is simply a term of affection for a beloved boy, many can lay claim to this nickname.

Here, poetic justice comes to our rescue. Buchi Babu Street is not too far from the old Chepauk ground, which is now the new M.A. Chidambaram International Cricket Stadium. In the very location of this street, so far away from Luz House, there is a built-in historical marker. There is no clarifying plaque in place yet, but cricket buffs will surely appreciate the name’s connection to the game.

Every year, in the month of August, Chennai celebrates Madras Day, commemorating the founding of the city in 1639, with a series of heritage-related events. In August 2015, as part of the celebrations Luz House was the venue for Dancing in the Parlor. The event recalled 19th and early 20th century Madras when accomplished practitioners of traditional arts indulged in experimentation. Composers threw in English verses into Carnatic songs, musicians used western instruments in the ensemble, and new gestures became part of Sadir, the classical dance, which was the precursor to Bharatnatyam.

When scholar and dancer Dr. Swarnamalaya Ganesh, and her students, demonstrated this multi-lingual repertoire which she had unearthed through research, there was a sudden power outage. The owners of Luz House arranged for kerosene lamps to light the performance space. A blogger wrote that the muted lighting transported people in the audience back in time – to an era when wealthy dubashes were patrons of art. So, the power cut worked as a special effect that evening. The event, free and open to the public, was a one-off thing, but it demonstrates how the owners of the heritage buildings could make the space more inclusive and engaging to a larger public which cares about history.

1. History of the Church – from the legend outside the church
https://www.indiastudychannel.com/resources/173267-Luz-Church-Our-Lady-of-Light-Mylapore-Chennai.aspx.

3. Buchi Babu and the coming of age of native cricket – The Hindu.

12339The buck never stops on the Buckingham Canal – ferry services are the latest 12337City auto drivers push forward in demand for State-sponsored app 12335Not “Others” 12328The Rise & Spectacular Fall of Square D 12323Sivasankari, as seen by Sivasankari 12312Taking the Neuroscience Movement forward 12308Dinesh Karthik’s Never-say-die Career – An Inspiration 12302Brown paper packages tied up with strings