Prof. Krishnamoorthy Srinivas – a look at this life and his work – III

Prof Krishnamoorthy Srinivas (1933-2017) – an eminent neurologist, brought to his practice an old world grace, charm and much empathy. We remember this true friend of Madras Musings by publishing extracts from his book – Tusitala, Celebrating the Life and Work of Prof. Krishnamoorthy Srinivas, brought out last year. Our thanks to his wife Padma for graciously giving us permission.

In South India, Professor S.T. Achar planned the establishment of the Institute of Child Health in Egmore, Madras. In the year 1948, he was the first Professor of Paediatrics in India, at the Madras Medical College as well as the first ­Indian to have a FRCP in Paediatrics from Canada.

The Institute of Child Health started functioning in its new building at Egmore in November 1968 with Dr. V. Balagopal Raju as the Director and Superintendent. The courses, Diploma in Child Health (DCH) and M.D. (Paediatrics) were launched in 1957 and 1961 respectively. In 1967, a Master of Surgery (M.Ch.) course in Paediatric Surgery was initiated at the Madras Medical College. The course, Doctorate of Medicine (DM) in Neurology, took off in 1965, but DM in Paediatric Neurology was offered more than two decades later. As in the West, some interested paediatricians felt the need to have a deeper grasp of neurology as a whole, to deal with some of the diagnostic dilemmas and case management issues in child neurology, including developmental disabilities; these professionals underwent the DM Neurology course.

It is in the above context that Prof. B. Ramamurthi appointed Dr. Srinivas to coordinate with Dr. Balagopal Raju of Institute of Child Health at Dr. Raju’s request, and admit cold cases under his care at MIN. With the clinical material in place, doctors who took up DM Neurology were rotated through Srinivas’ unit at MIN to receive his detailed inputs in Paediatric Neurology. Srinivas’ orientation lecture would always start with the famous quotation of Sir Lancelot Barrington Ward – ‘The adult may be safely treated as a child, the converse can lead to disaster’. Doctors such as G. Kumaresan, D. Kamala, V. Jayakumar (Madurai) and Kanappan, with a prior DCH/MD Paediatrics formed the early batch of Paediatric Neurologists in Tamil Nadu; they went on to make their mark in their subspeciality. A formal DM course in Paediatric ­Neurology was established as late as 1988, along with subspecialties in other fields.

Srinivas had trained at Montreal Children’s Hospital (MNI), Canada, with Prof. Preston Robb, a Paediatric Neurologist of renown. His interest in epilepsy made Robb collaborate with Wilder Penfield in epilepsy surgery at Montreal Neurological Institute (MNI) and subsequently he became Professor and Head of Neurology at MNI. Prof. Robb took on generations of trainees from all over the world. He was a great humanist and magnificent teacher, always nurturing independent thought and supporting initiative. He insisted that ‘the physician does everything in his power to create an environment in which patients and families were able to maintain their dignity while coping with the dreadful hurdles that life placed in their path.’ Dr. Srinivas was able to fine-tune the clinical aspects of paediatric neurology under Robb’s mentorship and the ­humanistic approach left a lasting impression on him.

Robb established a cerebral palsy unit of a dedicated multi­disciplinary group, a model that was later adapted by other centres in Canada. Srinivas imbibed the ethos of neuro-rehabilitation of the child with developmental disability – the collaborative approach of members of multiple disciplines such as child psychologists, psychiatric social workers, physio­therapists and speech therapists, all with the common goal of improving the health condition of the infant/young child. This exposure was to serve him well when he returned to India and set up his plans for care and neuro-rehabilitation of the chronically ill and disabled of all age groups.

In Prof. Srinivas’s own words, “When I received my MRCP London, Prof. K.S. Sanjivi, sent me a personal letter congratulating me. In those days, The British Medical Journal and Lancet carried the list of successful candidates. Being an avid reader of these journals, he noted my name in the list. He told me about Voluntary Health Services and asked me to join him if I was coming back. He visualised excellent opportunities to develop Neurology services within the community. Little did I realize at that point how deeply I would be involved in the organisation of the Department of Neurology in the institution he had founded, nurtured and kindled”.

Dr. K.S. Sanjivi was an eminent clinician, chest specialist, and a great teacher. He was Director of Tuberculosis programme of Madras Presidency. He was Professor of Medicine, first at the Stanley Medical College, Madras and then at the Madras Medical College. He took early retirement from Madras Medical Service in 1957 to put to action the model of equitable healthcare at community level, an idea that had formed in his mind with great clarity. Voluntary Health Services was registered as a charitable institution in 1958. The foundation stone of the main hospital building was laid by Jawaharlal Nehru, then Prime Minister of India, in October 1961 and the hospital became functional in July 1963. 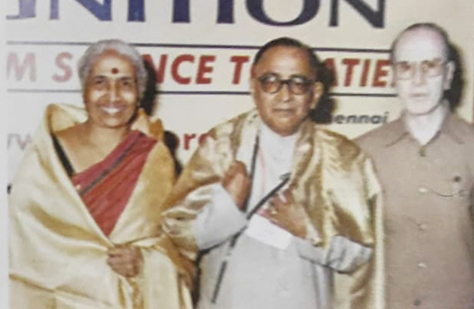 Back in India in 1965, Prof. Krishnamoorthy Srinivas joined the Department of Neurology in Madras Medical College attached to the Government General Hospital where he was exposed to a large number of neurological patients. Initially, he worked as a member of an eminent Neurosciences group led by Prof. B. Ramamurthi and trained students in Neurology for different courses. However, he was brimming with innovative ideas in Neurology in Modern Medicine as a result of training in the latest patient care and clinical research methods while in the West. He wanted to put it to practice in community medicine. He realised the importance of bridging the gap between Neurology, a highly specialized branch of Medicine, and Community Medicine. The appalling lack of awareness in the general population, more so in the poorer sections of society and in rural India, made him gravitate towards community medical/neurological healthcare and clinical research.

VHS under Dr. Sanjivi was a model community health centre and multispeciality hospital conceived and nurtured by the doyen, and at that time, one of its kind in the whole of India. Some of the best specialists in Chennai served at VHS on an honorary basis. With this head-start provided by the centre, Srinivas launched his mission of Community Neurology at VHS. He gradually built the Department of Neurology at VHS brick by brick, involving himself inits development across infrastructure, human resources and more.

Pioneering the building of a super-speciality department in India was no easy matter. It had to go well beyond a pipe dream to attain credibility, Funding was central to the success of the endeavor. The specialty departments in VHS were autonomous and the heads of department had a free hand in funding their own funding.

Dr. Sanjivi advised Dr. Srinivas to consider the ‘haves who could support the have-nots’ – “Get to know the families and they will help you, just as you help them,” he said. In the beginning, Srinivas sat on a single chair in the corridor outside VHS as we know it today, with nothing else but a table and a stool for the patient. He worked his way to a single room and one junior clinician assistant. He spent long hours by the patient’s bedside, gaining the confidence of both patient and relatives. The successful outcomes of the treatments and his total commitment to his goals in community medicine helped Srinivas build a reputation as a neurologist of high standing.