Prof. Krishnamoorthy Srinivas – a look at this life and his work – II

Prof Krishnamoorthy Srinivas (1933-2017) – an eminent neurologist, brought to his practice an old world grace, charm and much empathy. We remember this true friend of Madras Musings by publishing extracts from his book – Tusitala, Celebrating the Life and Work of Prof. Krishnamoorthy Srinivas, brought out last year. Our thanks to his wife Padma for graciously giving us permission.

Srinivas would drive down at a leisurely pace, through empty roads, along the Marina Beach, past Queen Mary’s College, Presidency College and the Senate Hall of Madras University in his Standard Herald, with occasional glimpses through his driver’s seat window at the placid waters of the sea in low tide, shimmering in the morning sunlight. The professional work was settling to a comfortable routine.

The Neurology Department at GH had recognised Srinivas’s training abroad and the MRCP (London) when he accepted the honorary post. Suddenly like a bolt from the blue, the University of Madras introduced DM in Neurology in 1966 and it was brought to his notice that he had to “qualify”. Srinivas registered for DM Neurology in April 1966 and completed it in April 1968, with flying colours as the first DM in Neurology to qualify in India, as a matter of fact in any DM course. DM Cardiology, Nephrology, and other superspecialities were introduced later. DNB Neuro was established in 1986. Now there is a qualified neurologist holding a DM or DNB degree in every district hospital and in many private hospitals in urban India, scant but nevertheless a move in the right direction

The Madras Institute of Neurology (MIN), a state of the art Neuroscience facility, was declared open in 1972 by his Excellency, the President of India, V.V. Giri. Srinivas was appointed Hony. Clinical Professor of Neurology in 1976. That same year, at the age of 46 years, Srinivas was elected FRCP London. As Honorary Professor, he received an honorarium of Rs. 150 a month, with added clinical and teaching responsibilities, and with working hours extending from 10 am to 1 pm. But Prof. Srinivas would never leave before 3.30 pm. He was there overtime with the doors of his consulting room in GH wide open to encourage his DM Neurology students to feel free to walk in. There would be dialogue on a problem case in the ward and its ideal management. These interactive sessions allowed for development of keener individual diagnostic acumen and innovative thinking. He would encourage his students to dip into his personal collection of books and journals on his office table and even to photocopy current medical literature. This was before the era of availability of the plethora of online literature. His students respected the jealous manner in which he guarded his books, as all bibliophiles do, and conformed to the basic rules of replacing the borrowed book promptly and in good condition

As examiner for several years, Prof. Srinivas was internal examiner at Madras Institute of Neurology (MIN), GH for DM Neurology and MD Psychiatry and external examiner in almost
every centre for these PG degrees in the country,

Dr. Pranesh was one of his earliest DM students at MIN. He had completed his MD in General Medicine before registering for DM Neurology. Prof. Srinivas would often mention the advantage Dr. Pranesh had of seeing Neurology through the lens of a well-trained generalist. Dr. Pranesh shadowed the professor’s search for excellence in clinical practice and teaching and later even initiated the Indian chapter of the Osler Club in his city of residence and medical practice, Coimbatore.

Below are excerpts from Dr. Pranesh’s message on the occasion of Prof. Srinivas’ 70th birthday celebrations, which also echoes the sentiments of those who have had the benefit of his intensive training for the DM Neurology course at GH: 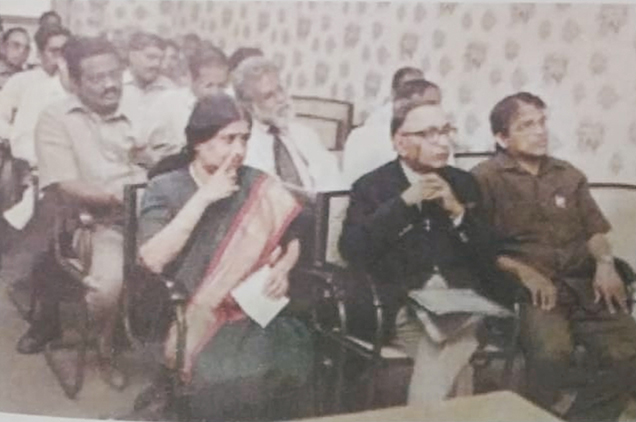 Prof. Krishnamoorthy Srinivas at a clinical meeting at the Madras Institute of Neurology, Department mini hall with faculty members, some of whom were
his students for Neurology DM.

“Prof. Krishnamoorthy Srinivas is one of the outstanding Neurologists of our country. He is a gifted teacher, institution builder and a leader who leads by example. I was one of those lucky PG students who worked in his Neurology unit at GH and was fortunate to go through his collection of journals and books, during my time there. He is a bibliophile and a true Oslerian. He has always treated his younger colleagues with kindness and understanding.”

Another DM student of Prof. Srinivas, Dr. A. Srinivasan’s message on the occasion waxes eloquent, “He is an encyclopaedia of neurological knowledge, a perpetual student, and his hard work will put many youngsters to shame. Dwarfs like us stand on the shoulders of this great giant, who helped so many of us to see further in our quest of Neurology.”

He is a noble example of days industriously spent, opportunities wisely used and talents devoted to honorable purposes. Many persons and many causes have benefited by his generosity and public spirit.

Prof. Kamakshi Shanbogue was another of professor’s DM Neurology students who later took over as Professor and Head of Neurology Department MIN. She contributes the lady student’s assessment of Prof. Srinivas. Her effusive praise in superlatives, as she would have it stands testimony to the professor’s charisma. “My first meeting with Prof. Srinivas was as a DM Neuro PG (1977-1979 Batch), I was clean bowled by his grace, kindness, courtesy, hospitality, chivalry and above all, his knowledge. His English was delectable. His overpowering personality, crystal clear memory, penchant for dates and historical events was enchanting. I still cherish wonderful memories of his early life anecdotes of Japan and of training in Britain”.

“Born of illustrious parents, he had a stamp of class. He has the power of making the most unpleasant things sound pleasant. It is the trait of not hurting anybody that makes him a cut above the rest. His clinical acumen is par excellence. He always carries several bags and pouches to work, loaded with neurological testing tools and reference material”.

“To conclude, he touched nothing he did not adorn.”

Srinivas was proud of his students and encouraged them in every manner and showed keen interest in their future progress in the professional field and in their family life. Many came back to meet him and joyfully relived their achievements. One such incident was when Dr. Dhanraj presented him a copy of his book M. Dhanaraj Acute Cardiovascular Diseases: an Approach, Orient Black Swan (1994).

Prof. Srinivas’s spontaneous review of the book (excerpts) are as follows:

“The book has been written with a view of serving as a handbook in stroke management, with special reference to the Indian context. The author, a highly qualified Indian Neurologist, has
based the book on his fourteen year experience in the management of stroke, in particular, at the Madras Institute of Neurology, Government General Hospital, Chennai.”

After recommending the book as a valuable ready reckoner for stroke, he ends with “I congratulate Dr. Dhanaraj on this commendable effort and I cannot help feeling a personal sense of pride in his achievement. My association with the author has been over several years, first as my student, and later as my colleague at the Institute, when I was Honorary Clinical Professor of Neurology”.

12050Can we grow beyond renaming roads? 12048Perungudi landfill fire — A harsh reminder why waste segregation at source is non-negotiable 12045Heritage Watch: Restoration of Chepauk Palace 12040Lost Landmarks of Chennai 12038Sanmar, what Sankar built 12036The peregrinating inscription of Ellis 12034Unheard Voices of Tranquebar – II 12026He cared deeply for the Game and the Players 12024Short ‘N’ Snappy 12020Our Readers Write