Last fortnight social media was awash about the international coffee major Starbucks appointing an Indian CEO. That the man was of coffee-loving Tamil origin was made much out of. There was plenty of good-natured banter about his name – Lakshmi Narasimhan and it was speculated that Starbucks had been inspired by that good old Chennai brand – Narasu’s. 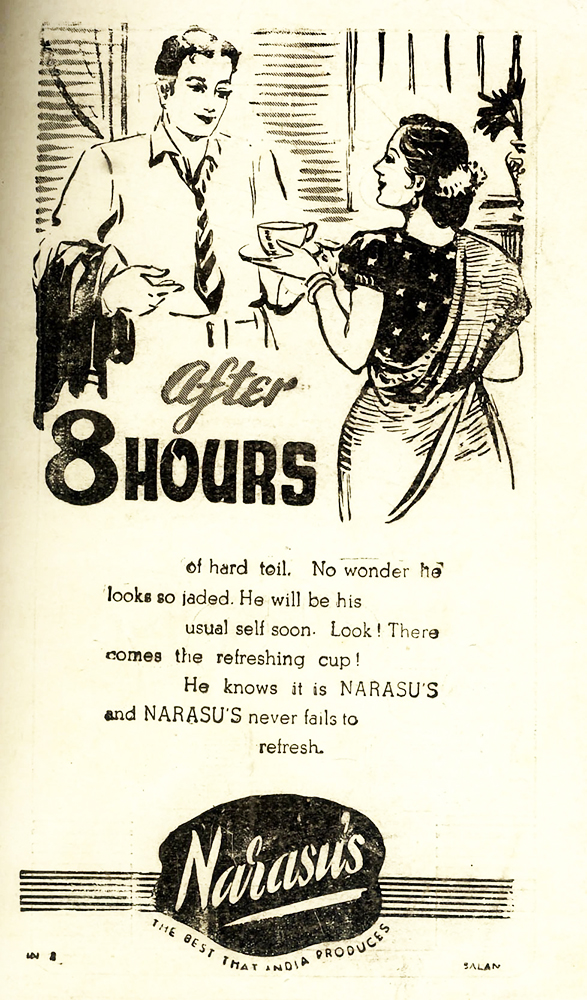 Our picture today is of a Narasu’s advertisement released circa 1951. That the brand has survived for so many years is testimony to its quality and the appeal it has. The man who lent it his name was a colourful personality who also dabbled in cinema and was once a studio owner. His association with the brand ceased years ago but the name has remained.

Starbucks has thus far had only a limited impact on the coffee-loving public of Chennai. Their outlets may be good places to hang around in but their coffee, despite all the mindboggling varieties of it, has not caught the local imagination, used as we are to our milky variety with loads of chicory in our decoction. But that there is a Narasu in charge of Starbucks does tickle the tastebuds.

12686Before we scoff at Bengaluru… … Let us recall 2015, 2016, 2021, etc. 12684Marina Loop Road: Civic body begins to clear encroachments, leaves fisherfolk dismayed 12678Physician to The Bronze Gods 12676Madras Teachers Guild and the South Indian Teachers Union 12674On the quarter-millennial anniversary of the Madras General Hospital 12671The fragrance  fades from Chennai 12668That eventful India-Sri Lanka Test at Chepauk 12666Dates for your Diary 12664Our Readers Write 12662Short ‘N’ Snappy