-- Business Houses of the South by Sushila Ravindranath

The very first Bullet motor bike outside UK was manufactured in Madras by Enfield India. It was also the first bike to be manufactured in the country. This was in 1955. The Bullet has gone through many avatars since then and today, according to Economic Times, is the market leader. It is the only two wheeler brand which has survived for almost 75 years. The original promoter in the UK has long since wound down. 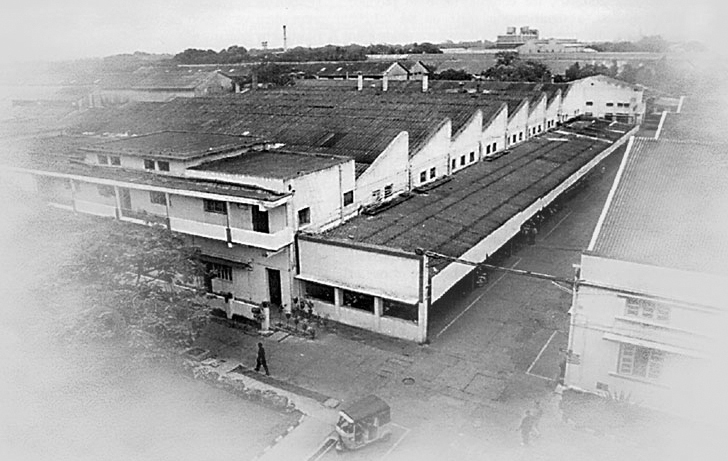 The Redditch company partnered Madras Motors in India to form ‘Enfield India’. Work commenced on the construction of a purpose-built factory at Tiruvottiyur in 1955. All pictures courtesy: royalenfield.com.

Madras Motors Ltd., the biggest suppliers of imported motorbikes in the country initially got the license for manufacture of bikes. There was a captive demand for these bikes from the Indian army. The company signed up with the then legendary Enfield Cycle Limited of UK as its collaborator. It however found the project too big to handle. So K.R. Sundaram Iyer, and K. Easwaran, two pioneering industrialists of those times, floated a new company called Enfield India Ltd. with an initial investment of (hold your breath) of Rs. 10 lakhs. The collaboration agreement with Enfield Cycle Ltd. was transferred to this company. Manufacturing facilities were set up in Tiruvottiyur in 1955 and production too began the same year with the first Indian motorcycle, Bullet rolling out of the factory. The company’s original production was 100 to 150 bikes a month. This was considered a respectable figure then. 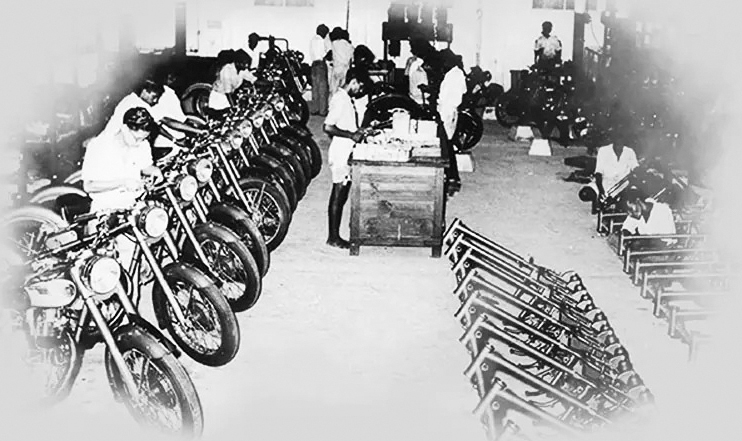 The Tiruvottiyur factory. Initially, machines were shipped from England in kit form and then assembled in the Madras plant.

Till 1961, Enfield enjoyed its pioneer status and controlled the entire market. The army bought up one third of the output. All was well till competition reared its head. Both Ideal Jawa and Escorts steadily ate into Enfield’s marketshare. By the mid 60’s Enfield started losing out to these two.

The company was facing both internal and external problems. Having reached a certain size, it did not know how to go forward. To survive, it had to work on growth and adopt different strategies. Enfield needed a change in direction.

There were many wrong decisions made in the earlier years. In 1952, the company entered the three wheeler market which ended in a disaster. In 1962 Enfield tried to make a scooter and introduced the Fantabulous model. Does anybody remember it? It had its moment for a few years and the sales dwindled down by 1973. It could not face the competition from new comers, Lambretta and Vespa, which were very popular during this period. This is the time when the 200cc Bullet was launched. The company just could not manage to sell any of its products in sufficient numbers.

Dead inventory was piling up. Enfield had many other challenges to face. There was the oil crisis of 1973 which resulted in massive price increases. Material costs were also going through the roof. There was 100 per cent power cut in Tamil Nadu then. In spite of all the looming dark clouds, the management was reluctant to increase the product prices. Nor were they ready to increase production above break even level. There was no marketing set up to speak off. All this naturally led to labour unrest which eventually led to a strike which lasted for many months.

Enfileld started steadily losing money and market share and was fast turning sick. The worst years were between 1975 and 1977. In 1977 the company had no reserves, and had a negative networth and could not meet day to day expenses. In the same year, Sundaram Iyer the chairman, and his son Sankaran, the managing director stepped down. The management was handed over to S. Viswanathan, Sankaran’s son.

The onerous task of turning around Enfield fell on Viswanathan’s shoulders. He rose to the occasion. He recognised that funds had to be raised urgently. He managed to do so from banks and financial institutions. Tamil Nadu government to which Enfield owed money, was supportive. It might seem unbelievable now that the amount needed was just over Rs. one crore. With the infusion of funds a turnaround strategy was worked out with the help of outside consultants. The company had potential, a lot of good will, and products people liked.

The factory was reopened, workers came back and production was doubled. It implemented price increases which did not affect the sales. Viswanathan brought in more professionals, introduced controls and started setting targets. Within two months, the company started picking up.

By 1981, the company had wiped out its losses. Couple of years down the line it started putting expansion plans in place. It put up a new plant in Ranipet. The government in the throes of opening up the economy was allowing collaborations for two-wheeler models of 100 cc and less. Everybody could see the growth potential in two wheelers. Bizarre as it sounds today, government granted 42 letters of intent to aspiring two wheeler manufacturers.

Enfield decided to go in for the manufacture of 100 cc vehicles, and a 50 cc moped which would be a geared two seater. All through its travails Bullet remained popular. It had been fully indigenised, was upgraded periodically and continued to be bought by the army and the police.

As a part of the revival plans Viswanathan went in for a technical collaboration with Zundapp of Germany. The company introduced 50 cc models, Explorer and Silverplus based on Zundaap technology . Some of the parts came from Zundaap. These proved to be popular particularly the Explorer. But by 1985, Enfield started facing problems again as two wheeler sales started slowing down in the country. To make matters worse, Zundaap shut down in Germany in 1984 earlier than Enfield anticipated. This meant that the company lost its initial advantage and could not produce the vehicles in the right quantity, at the right time, with the right quality. Enfield had passed up the offer to take over Zundapp which on hindsight was a mistake.

Starting from 1987, the entire 2 wheeler industry was in the doldrums. Enfield hit a new low in sales. The company ended the year in losses. Viswanathan remained optimistic. He hoped to bounce back in a couple of years as he managed once again get help from the financial institutions, banks and Tamil Nadu government.

The company had reasons to hope for better times to come. The Bullet remained unshakable. The introduction of Escorts RD did not affect the Bullet. But the new 100cc Japanese motorcycles were turning out to be stiff competition. No one including Enfield realised then that the Japanese bikes were going to take over almost the entire market. Senior executives in the company seriously thought they can match Hero Honda’s four stroke engine.It soon became apparent that Honda was becoming the market leader. 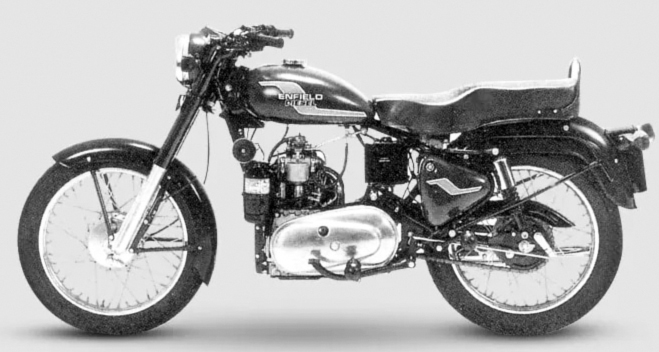 Enfield believed that introducing new models would help regain its position. It tried. The Bullet was further improved with several varients. A diesel Bullet was being planned. A 100 cc vehicle Enterprise and a 163 cc Fury had already been launched.

What Enfield banked on was the 22cc Mofa which was a cross between the cycle and the moped and was priced at Rs 3000. It was meant to be an upgraded cycle without using muscle.

Unfortunately the Mofa was not a hit but a miss. Customers did not take to it. The reason was exactly why Tata’s Nano car failed as the aspirational class looked down on it. People wanted a cycle or a moped and not a hybrid.

Viswanathan tried his best to keep Enfield alive. It just could not withstand the Japanese tsunami. By 1990 more than 50 percent of Enfield’s net worth was wiped out. The cash rich Eicher group from Delhi first acquired 30 percent equity from Viswanathan and assumed management control. Three years later it bought out the company from the founders and took it over totally.

How Eicher turned the company around by going back to Enfield’s roots, focusing on the old war horse Bullet and made it the country’s best selling motorbike is another story for another time.