The three TN cricketers who played in over 50 tests

Figuring in over 100 Tests is quite commonplace these days given the proliferation of matches though the feat is certainly a significant one for the player concerned. India itself has 12 representatives in this club but there is none from Tamil Nadu. The state’s representation in the national team over the years has not been in keeping with the talent available even though of late the number of players donning an India cap in Tests has increased.

But the limited number of caps can hardly satisfy the keen follower of Tamil Nadu cricket. The trend was set by the likes of M.J. Gopalan and T.E. Srinivasan (one Test each) to V.V. Kumar and S. Badrinath (two Tests each) to C.R. Rangachari and A.G. Milkha Singh (4 each). The appearances of Tamil Nadu players in the Test squad was for long sporadic symbolised by C.D. Gopinath who played just eight Tests though his career started in December 1951 and ended in January 1960. 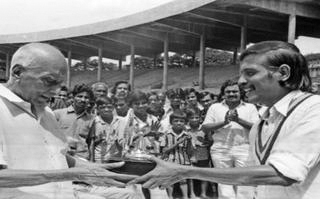 A.G. Kripal Singh was the first player from the state to play in more than ten Tests (14 in all) but it was not till S. Venkatraghavan appeared on the scene that the representation was more permanent and over a longer period. Venkat appeared in 57 Tests and has the third longest career in terms of years (1965 to 1983) for an Indian player after Sachin Tendulkar and Lala Amarnath. For long he was the only representative from the state in the Indian team until joined late in his career by the likes of Bharath Reddy who played four Tests and L. Sivaramakrishnan who figured in nine.

After Venkat played his last Test Tamil Nadu’s representation was kept aglow by K. Srikkanth who figured in 43 Tests from 1981 to 1992. Besides he too like Venkat captained India (in four Tests to Venkat’s five). From the 90s into the new millennium there were a few representatives from the State in the national squad but again the Tests they played were rather limited. W.V. Raman for example played 11, S. Ramesh 19, Hemang Badani 4 and so on.

It was not until the second decade of the 21st century that two representatives from Tamil Nadu figured regularly in the Indian team. Murali Vijay and Ravi Ashwin have so far played 61 and 86 Tests respectively and while the former’s career could well be over Ashwin has it in to add to that figure – and yes, even become the first from Tamil Nadu to play 100 Tests. And these days with the advent of T-20 internationals the TN player has the opportunity to earn an India cap even if not a Test one and there are several who have donned it. Dinesh Karthik for example is more or less a regular in the limited overs formats but it must not be forgotten that he has also played 26 Tests a commendable figure considering his career has overlapped that of M.S. Dhoni. Indeed the trio of Ashwin, Vijay and Karthik did Tamil Nadu proud by figuring in three Tests together in 2018 against Afghanistan and England. The only other time this has happened was when Kripal Singh, Milkha Singh and Kumar figured in the Test against England at Bombay in November 1961.

For all the splendid performances of Ashwin, Vijay and Karthik, Venkat deserves most praise for his pioneering efforts to show that a player from the State could have an extended career. As a member of the famed spin quartet, he helped shape quite a few Indian victories.

Srikkanth too was a pioneer of sorts. Going from the bowling from the very start and playing unorthodox strokes may be commonplace for an opening batsman these days especially after the advent of T-20 but it was Srikkanth who showed the way more than 40 years ago. So often did I see the spectators come to the ground just to see his pyrotechnics and when he was out they left the venue in droves. Vijay and Karthik too have shone quite often while playing for the country. As for Ashwin on sheer stats, his ubiquitous qualities and the various records he holds he could arguably be the finest cricketer ever produced by the state.