An article entitled A brief notice of some contrivances practiced by the native mariners of the Coromandel coast, in navigating, sailing, and repairing vessels by a Madras-based British military engineer Harry Congreve is available in the Madras Journal of Literature and Science (1850). In this article, Congreve refers to ‘ra-p- palakai’ a miniature version of the device known as ‘kamãl’ and ‘al-kasãbã’ (Arabic) and ‘tábua da Índia’ and ‘tavoleta náuticas’ (Portuguese), which was introduced by Arab mariners into southern India in the 9th-10th centuries. Congreve qualifies the ra-p-palakai as ‘ingenious’, probably because of its smallness and simplicity in relation to the kamãl of the Arabs. Additionally, he briefly speaks of the methods employed by Tamil mariners of the Coromandel coast to measure the rate of sailing, assess the direction of the ocean-surface currents, evaluate sites suitable for docking a vessel and how the vessel was undocked. Except for the assessment of the direction of the surface currents using a moist ball of ash, the other methods seem to have been transmitted by European mariners who came to the Coromandel coast. Congreve’s article offers interesting peeks into some of the creative practices – although of rudimentary science – of the Tamil mariners in the 1840s.

Marine fishing was widely practiced along the c. 1000 km long Coromandel coast in the past from Pazhaverkadu (Pulicat) to Kanyakumari of the erstwhile Madras presidency. Korkai, (Thuthukudi district), for example, was a busy pearl- and chank- fishing centre and a commercial port during the reign of the Pandya kings of the Sangam period (3rd century BC – 3rd century AD) Catamarans were commonly used on the Coromandel coast for marine fishing in ancient times. Open boats, also known as ‘sewn-plank boats’ and masûlã-s, well-suited to the rough surf of the Bay of Bengal, are known to have been in use for the past 300 years.

With Madras growing as a vibrant city in the 18th and 19th centuries, the English East-India Company (EEIC) found it hard to bring ships transporting humans and cargo to Madras because of shallow waters and rough coastal surf. The incoming and outgoing ships were, therefore, parked nearly a mile (1.6 km) away. Humans and cargo were moved to and from the shore in the masulas.

James Hornell (Director of Fisheries, Government of Madras, 1920s) refers to catamarans and masulas in the Coromandel in the 1920s:

‘Northward of Point Calimere (Kodiakkarai) is the real home of the catamaran, a truly Indian type, specialized for use upon the surf- beaten Coromandel and northern Telugu coasts where the catamaran and masula boat must continue to hold their own wherever there be no harbours of refuge, such as Madras and Cocanada (Kakinada).’ 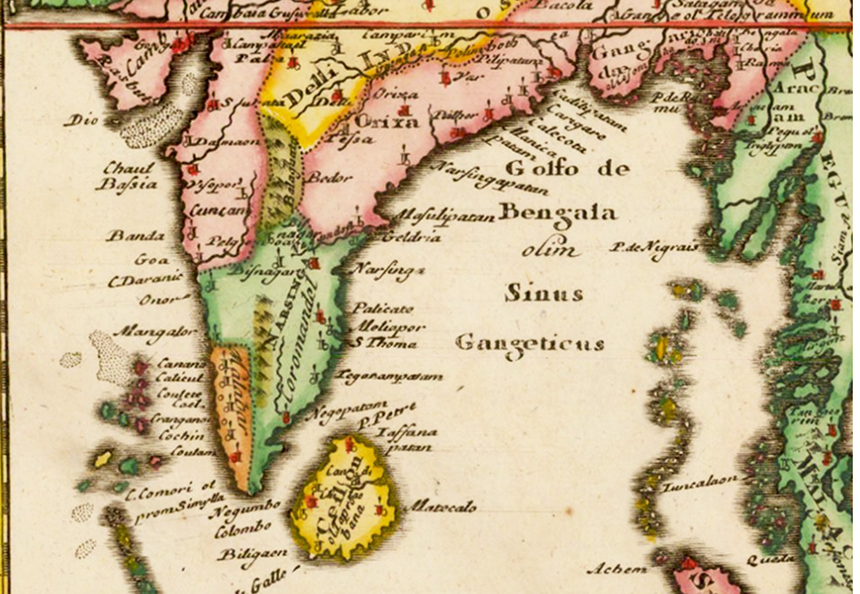 Equipped with relatively primitive devices, e.g. lead line, quadrant, sextant and astrolabe, admirable cartography of the world was achieved as early as the 16th century. Near-accurate maps of the East Indies became available in the 16th century, coinciding with many European nations colonising parts of South and Southeast Asia. A map of the Coromandel of the mid-17th century by Philipp Clüver includes some of the key landmarks, such as Mylapore (indicated as Meliapore), Pulicat (Pulicãte) and Santhomé (S Thome) of modern Madras. A map of the Coromandel by the French cartographer Jean Baptiste Bourguignon d’Anville (1697– 1782), published in 1788, is yet another marvellous example.

In such a captivating maritime context of the southern segments of the Coromandel, an article by Harry Congreve entitled ‘A brief notice of some contrivances practiced by the native mariners of the Coromandel coast, in navigating, sailing, and repairing vessels’ impresses. The present note refers to his article published in the Madras Journal of Literature and Science (MJLS) in 1850.

The little we know of Congreve was that he joined the Madras Army (Artillery, Infantry Division) as a Second Lieutenant in 1830 and was promoted to Full Lieutenant in April 1834. He was brevetted as Lieutenant Colonel in the 1860s. He published a few papers in engineering, further to the one discussed here. In later years, he explored the anthropology and antiquaries of the Nilgiris. Possibly he lived in the Nilgiris for some time before he returned to Britain.

An ‘ingenious’ device to ascertain latitudes 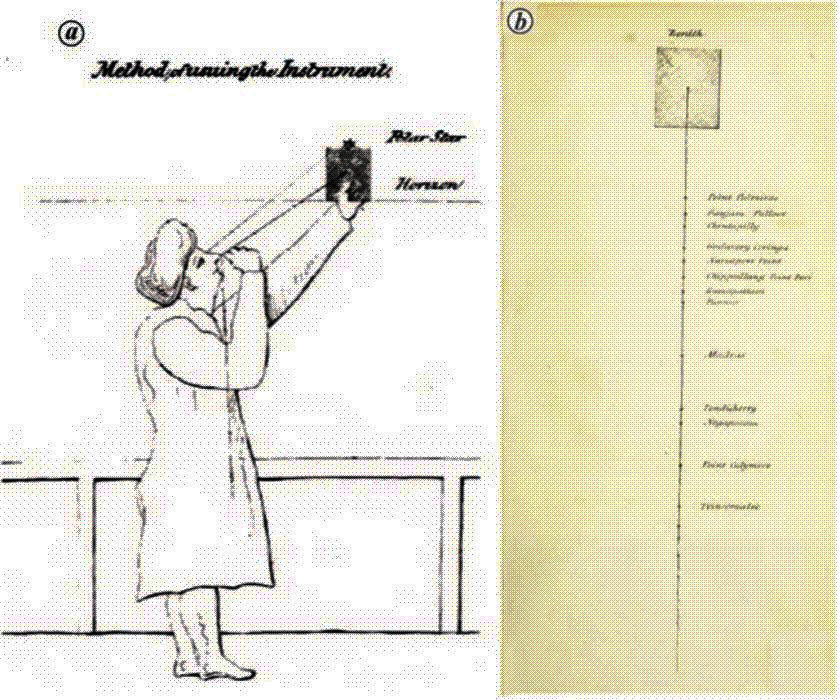 a: Illustration in the article by Harry Congreve depicting the use of an ingenious device by a Coromandel mariner to measure latitudes. b: Knots on the cord matching with ports along the Coromandel coast.

Congreve mentions a device used by the Coromandel mariners when they were out of soundings (Figure 4; note 5). This device was a 3”x1½” (7.62 x 3.81 cm) wooden board with an 18” (45.72 cm)-long string hanging from its midpoint. The string included knots that referred to the previously observed and recorded locations (ports) along the Coromandel coast. The person using this device held the board with the longer side upward in his left hand. The board was then adjusted by moving forward and backward, to align with the vision of the person using the board ‘until its upright length corresponded with or covered the space between the polar star and the horizon’. With the right hand, the person holding the board brought the string close to his nose and knotted it at that point. At this point, Congreve mentions:

‘If he (the person using the board) then was close to Point Palmiras, an undeviating index is afforded, which, in future, would show that person whenever he was off that point. The North Star’s elevation being always fixed, and therefore, all the parts of the triangle formed his line of sight, the string, and the distance between the polar star and the horizon, and or the length of the board, equally as constant.’

The knots on the string determining every identified location enabled a future mariner to ascertain that location with reasonable accuracy anywhere ­between Calcutta and south-point of Ceylon (Sri Lanka).

Methods to assess the speed of sailing, direction of water current, docking and undocking

The rate of speed of sailing was measured by flinging a piece of wood into the sea. The mariner who flung the piece of wood would walk towards the ship’s stern, keeping pace with the floating wood. The speed of the vessel was deemed equal to the mariner’s rate of walking.

When a vessel was to be docked, she was floated into a wet dock, referred to as a ‘basin’. Once docked, the entrance to the basin was manually closed with a mud embankment. Water level in the dock harbouring the vessel was raised until the vessel was at a considerably greater level than the level of the sea or the passage through which the vessel entered the wet dock. After stabilizing the vessel, water was drained and two large wooden beams were placed under the vessel in such a way that they rested on the drained bottom. Long mud shores were quickly laid parallel to the parked vessel, enabling disembarkation of the occupants.

To undock a vessel four thick ropes, each coiled like a cone were used. One cone of rope was placed under the starboard bilge (spelt as ‘bulge’ by Congreve) forward and another under the starboard bilge aft. The third and the fourth were placed at corresponding positions on the larboard side. These four rope cones were intended to support the ship, which was then gradually lowered by withdrawing the rope.

12920Tempting School Children with drugs – the new menace 12918Funding accelerated for government schools even as TN slips a rung in the PGI Index 12916Heritage Watch 12914Centenary of a Loved Landmark 12929Chennai’s role in fostering commercial education in India 12910How ‘Green’! 12908When old rivals met in Kangaroo Bhoomi 12906Short ‘N’ Snappy 12903Our Readers Write