The family next door

The Woman from Madras Musings is not sure if this is a Madras thing, to be honest. To be sure, she’s never experienced it anywhere but here – the easy familiarity that crops up amongst families living in a flat, especially when the building has been their home for decades. At some unidentifiable point of time, the residents go from being neighbours to more or less next of kin and the privileges of familiarity come into play. (Wo)MMM is certain that there’s a fun sitcom in the whole thing, somewhere. Let her regale you with a few tales from her own backyard.

(Wo)MMM’s favourite running gag at the Eternals’ apartment is that of the Whiteboard. It is an innocuous thing that hangs at the flat entrance, right above the watchman’s seat, a marker balanced along the top. It was intended, initially, to be an old-school message board, one where, unlike whatsapp, people cannot willy nilly send off on a whim ghastly pictures of roses or birthday cakes or babies or rosy babies in birthday cakes. But it didn’t take long for the Whiteboard to become the sole domain of an Apartment Elder who used it as his personal short messaging platform. The board carried everything from pithy quotes (“You cannot talk butterfly language with caterpillar people!”) to jokes (We are waterproof. Don’t believe? Look outside – there’s the water, proof!”) to mundane announcements from the Association. The Elder was having so much fun with the whole thing that the idea of anyone else using said board was quite unthinkable – until a new tenant moved in. Sources claim that said tenant – who turned out to be of rather enterprising, vivacious stock – beat the Elder to the board on one occasion by waking up earlier and posting a soulful thought for the day. Sadly, (Wo)MMM was not around during the time and it is hard to confirm the veracity of the report. By the time she swung around the apartment once again, circumstances contrived to see the much-loved Elder and his better half – a couple whom, incidentally, (Wo)MMM has known since the day she was born – move away lock, stock and barrel to another city, ceding their flat to new owners. The last message A.E left on the W was rather poignant – “I live in my own style and go in my own style.” It was on the whiteboard for days before anyone wiped it off.

The new owners, (Wo)MMM is currently discovering, are somehow exactly the sort suited to the flat. The new Elder is a sort of jolly Indian Santa, all smiles and loud-voiced and easy-going. Readers may remember (Wo)MMM mentioning in earlier columns that the Eternals’ home has been under renovation – the new owners happened to move in during said period and jolly Elder lost no time in skipping down to say hello at the first opportunity he spied a presence in our home. ‘Come in and take a look around the newly renovated house,’ said (Wo)MMM warmly, anxious to strike a friendship. ‘Oh thanks, but I already saw everything, you know,’ replied the jolly uncle. ‘All of us did, actually.’ Then he proceeded to describe the group tours that had paraded through the house. It must be admitted that (Wo)MMM was a bit surprised. But somehow – and here’s the rub, really – she discovered that there was not an ounce of indignation imposing itself upon her. It is hard to say whether she would be as unperturbed by such a thing in another city or even in a newer apartment complex or gated community. But here it felt okay. Jolly uncle visits often, for he is renovating his own flat and sometimes drops by with his crew to take pictures of the paint or the tiles.

It was on one such occasion when J.U’s contractor was taking note of the living room paint when Pater Eternal – back home and delighted – barged into the hall. “Could you, Mr Contractor,” asked P.E, eyes shining, “buy a little extra paint and then touch up my walls here and there?” A few scratches had appeared during the shifting, you see, and they are frankly an eyesore. P.E looked questioningly at J.U for his blessing. “Of course!” boomed our Santa and chuckled heartily for good measure. “We’re all together!” And that, (Wo)MMM thinks, is a very Madras thing to be.

The city’s been soaking in intermittent spells of rain and weathermen celebrities are back in the spotlight. The Woman from Madras Musings was quite amused to see that said C.W have become household names to the extent that social media posts and chats have taken a rather strange turn. The usual questions pop up, of course – “Is it alright to travel from place A to place B by bike?” “Is it worth commuting all the way to office?” Then there are those q’s that (Wo)MMM imagines would make anyone a bit nervous. “Advise re: son’s outdoor wedding on such & such date, thanks.” Then there are the flock of artful school children who have realized that the prospect of a holiday from school could well hinge on the word of the C.W – they flood their pages with heartfelt requests, exhorting them to save them from a terrible math test or a ghastly poem recital.

The celebrity weathermen, for their part, are displaying a marked levity in their own updates. “No rains for a while, better go to school,” posted one, provoking a dramatic response from the student body. Then there were the helpful advisories that served as a guide to plan the drying of clothes, namely, “kayapotta lungi, baniyan, pattampatti jetties etc..”

Who would have ever thought weather updates could be so much fun?

A charming slip of the tongue 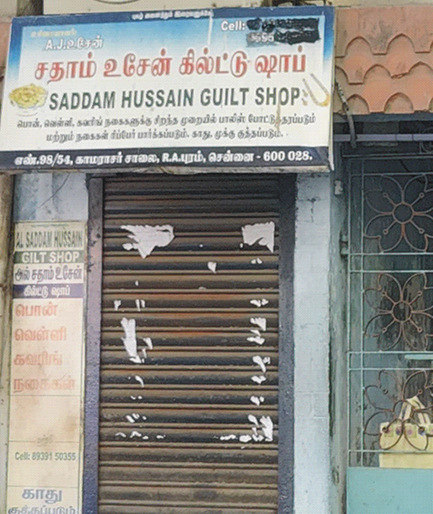 The Woman from Madras Musings was driving past a busy street in RA Puram when a curiously-named shop surfaced in the corner of her eye and vanished before she could blink. She asked the driver if he had seen it. No, he hadn’t; should he turn back to drive past, once more? (Wo)MMM gratefully accepted the offer and this time, kept her eyes peeled on the persistent row of tiny shops lining the narrow street. She hadn’t been mistaken – there, almost shyly tucked away near a largish tree making friends with the road was a small enterprise that called itself the ‘Saddam Hussain Guilt Shop.’ The Tamil description below the name board made it clear that the proprietor was a metalworker, but (Wo)MMM found the spelling quirk delightful. Wouldn’t it be lovely to actually have a shop that sells its customers conscience in bulk?

12920Tempting School Children with drugs – the new menace 12918Funding accelerated for government schools even as TN slips a rung in the PGI Index 12916Heritage Watch 12914Centenary of a Loved Landmark 12912A device used and some methods practised by Tamil mariners in the mid-19th Century 12929Chennai’s role in fostering commercial education in India 12910How ‘Green’! 12908When old rivals met in Kangaroo Bhoomi 12903Our Readers Write