The article on Gandhi Nagar (MM, December 1st) brought back memories of my childhood (late forties, early fifties) when my father Dr. T.M.B. Nedungadi had purchased a plot in the newly formed layout and built a house which was let out. The address was No.23, 4th Main Road, Gandhi Nagar. One of the early tenants  was Prof. Balakrishnan Nair, Principal of Presidency College, Madras, father of  the noted plastic surgeon Dr. Mrs. Mathangi Ramakrishnan. The next tenant was (late) Mr. G. Vasantha Pai, leading advocate of Madras High Court, who eventually purchased it in the late 1960s.

What I recall today of our occasional visits there is the fact that at that time Gandhi Nagar was like the last frontier of Madras. It  was open country side beyond the layout towards the south.

Thank you for the excellent write up and photographs of the building. The building was constructed with Porbandar Stone, and perhaps did not weather the conditions in Chennai well. The exteriors had acquired a grey drab look. “Restoration” of the domes did more harm than good. The structure itself was compromised by all sorts of construction, including heavy water tanks and offices. The toilets in the building were leaking and causing further damage.

Under the able guidance of S. Goplalakrishnan, (then ­Additional General Manager)the structures in the terrace were removed, lightweight ­fibre glass tanks installed and the toilets sealed off. A ­separate toilet block was constructed in the quadrangle inside the building.

Greater Chennai Corporation (GCC) has on its website released the names and addresses of property tax defaulters whose dues are over Rs. 25 lakhs. If the idea is to name and shame the defaulters, this move does not in any way make them relent. For, hardly does this get noticed by many. The GCC should erect huge boards at the locations of the defaulters indicating the tax dues, at the cost of the defaulters themselves. If this too does not yield results, it should take stringent measures such as cutting off power/water supply. The GCC should not treat defaulters with kid gloves anymore, as the matter has progressed beyond such measures. Like Tangedco snaps power supply if the bill is not paid, the GCC should devise serious measures to ensure prompt payment of property tax.

All said and done, a big question that the GCC is duty- bound to answer is, why were the defaulters allowed to accumulate so much arrears and why no action was taken?

While the list released talks of only the tax due of over Rs.25 lakhs, one is sure, there could definitely be others with dues ranging from Rs.5 lakhs and Rs.10 lakhs, which again is a sizeable amount and cannot be lost sight of. GCC should initiate recovery proceedings on the above lines.

My daughter and I were returning home from Mylapore. I told my driver to make sure that the detour he was taking was the right route. My daughter suggested that I should turn on Google which would direct us. I argued that Google would have no clue as random roads were being blocked off daily with all the digging of roads. She insisted that I should turn on Google which will have up to date information. Suddenly a third voice piped up. “For that you should have a cell phone with internet connection.” It took us some time to realise that it was a voice from my daughter’s cell phone, which was inside her handbag. My son reminds me all the time that we should not have any conversation with Alexa around.

A couple of days back Amazon sent me an email reminder to order an energy bar pack, which I had bought a couple of months ago. Routine reminder? I had taken the last piece only the previous day.

A Pondicherry in New Hampshire, USA

In 2011, I wrote about a ‘Madras’ in the State of Oregon, US in these columns (Madras Musings, Vol. XXI (5), 16-30 June 2011). A few days ago, I was pleasantly surprised to know that a natural area named the ‘Pondicherry Wildlife Refuge’ occurs in the State of New Hampshire (NH) in the White Mountain National Forest Area, within the Coos County, located 100 kms east of city of Vermont and 130 kms west of city of Augusta (Fig. 1). The Pondicherry Wildlife Refuge was created in 1963, when the New-Hampshire Audubon Society and the New-Hampshire Fish & Game Department acquired 312 acres of land around the Cherry and Little-Cherry Ponds. Tudor Richards, a pioneer member and leader of the New-Hampshire Audubon Society was the key driver for this acquisition and in encouraging the concept of a wildlife refuge here. Tudor named this refuge as Pondicherry, tracking this name in the historical maps of the state of NH. Pondicherry (NH) is a Division of the Silvio O. Conte National Fish & Wildlife Refuge and is owned and managed by the U.S. Fish & Wildlife Service in partnership with NH Audubon Society and the NH Department of Fish & Game. More details of this wildlife refuge can be got from https://www.trailfinder.info/trails/trail/pondicherry-wildlife-refuge-main-trail-system.

What is today known as the state of NH, was occupied by the British and never by the French, although French explorers did travel to parts of North America (later the United States of America) between 1600 and 1605. 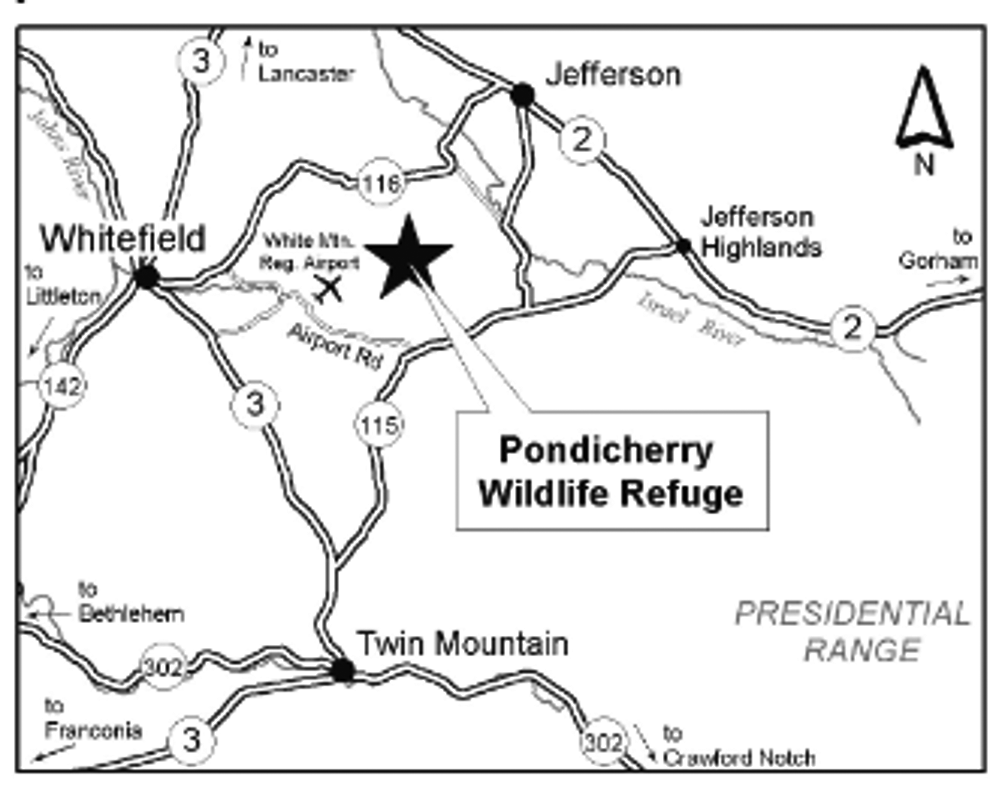 According to the history of NH, the first permanent English settlement was at Hilton’s Point (today, Dover) in 1623, from where they spread to Durham and Stratham; in 1679, NH became a part of the Royal Province (= the Province of New York, a British proprietary colony, and subsequently the Royal Colony). One Captain John Mason (former Governor of Newfoundland) named this landscape as NH after the English County Hampshire.

Therefore the naming of the White Mountain National Forest Area in Coos County as Pondicherry evokes curiosity, because the knowledge of Pondicherry in India (then Pûdûchéry, Védapûri) could not have been a reason for this naming, because the first French visitor Bellanger de Lespinay arrived in Pûdûchéry representing la Compagnie française des Indes orientales only in 1673. de Lespinay was replaced by François Martin in 1674.

Sometime later in the 18th century, frequent disputes erupted between the English living in NH and the French living in the neighbouring New France (modern Eastern Canada). During this time, movement of French people to the White Mountain National Forest Area, in modern Coos County should have occurred eventuating in naming a village as Pondicherry. Overtime this village may have disappeared, due to lack of people and, from the old maps of NH, Tudor must have discovered the name and used it to name the wildlife refuge.

The Case for Heritage Walks

In the 1990s, we used to host regularly, Walks in Mylapore. The group’s ambition was to offer this Walk every weekend to whosoever wanted to explore this part of the city for a fee.

One of the highlights of the Walk was the stop at the grand house of a very friendly Rajasthani family on Bazaar Road, a small hub for the community whose elders are said to have walked for days from their native towns to the South, to pitch their business. Bazaar Road holds fascinating stories of social history, given that it was probably the busiest road that linked the then big villages of Thiru-alli-keni and Mylapore.

Back to our grand house. We would arrive close to 8 a.m. on a Sunday and this was certainly not the time to seek a peek into living quarters where some two dozen people resided. But the host was a delight and made arrangements for a quick, snappy tour – this was important in order to get an idea of the social and living practices of this community in a different era – where the joint family met and socialised in common spaces and retired to their own spaces on all the floors.

It so happened that a true-blue Mylapore caterer had then rented some open space at the rear of this rambling house to run his catering business. So we smartly tied up with him to provide us the best breakfast of pongal and vada. I think this alone wowed people who were on our Walks.

Recently, the department of Geography and Tourism at Queen Mary’s College ­celebrated what is its grand annual event coinciding with World Tourism Day. The faculty are an enthusiastic bunch and I have told them that while the annual mela is good to plan and host, the department must chalk out a smarter, valuable and skilling project for the girls.

I am appalled at how most college’s departments that deal with history/geography/ tourism focus on the travel trade, teaching the girls and boys the skills of selling plane tickets! Students too enjoy lazy training; nobody wants to get them into exciting projects like Walks.

If QMC or Stella Maris or Vivekananda can tie-in with TN Tourism, the value of such a project will go up.

13129Why TN continues to dither on its Heritage Act 13125City police tap into Facial Recognition Technology to the alarm of people and politicians alike 13123Heritage Watch: Diamond Jubilee of the Music Academy Auditorium 13121TTK Auditorium turns sixty! 13117The Alcohol Conundrum – an interview with Dr. Shanthi Ranganathan 13115Self-discovery and exploration of mental health issues 13113The Puzzle of the Aadu Puli Aatam Board Reserved for a Player – Yeri Katha Ramar Temple, Maduranthakam 13110Short ‘N’ Snappy