The Alcohol Conundrum – an interview with Dr. Shanthi Ranganathan

1971 – DMK under M. Karunanidhi lifts Prohibition as a means to supplement the State’s income.

1981 – AIADMK under M.G. Ramachandran decides to manufacture and sell liquor through the government, and forms TASMAC to sell alcohol.

The liquor industry itself (including liquor shops/ outlets/ eateries attached to bars/liquor producing firms) currently employs more than one lakh people in Tamil Nadu.
Magasool Trust’s socio economic survey ( 2015) on the effect of TASMAC on people in Tamil Nadu estimated:

92 percent of the population favoured closure of TASMAC shops.

83 percent of the women said their husbands were consuming more alcohol over the past 10 years.
Those within one km radius from liquor outlets tend to regular drinking. 84 per cent of them resorted to verbal abuse and 64 percent were ‘wife beaters’.
Those who drink daily spend Rs 6,552 per month on alcohol, so close to Rs 44,000 crore is spent per year across Tamil Nadu.

34 percent of the women said that the main wage earner lost 14 man-days per month to alcohol. Per year, this entails a loss of Rs 20,500 crores for families.

The total economic loss for people of Tamil Nadu amount to Rs 67,444 crores per year. 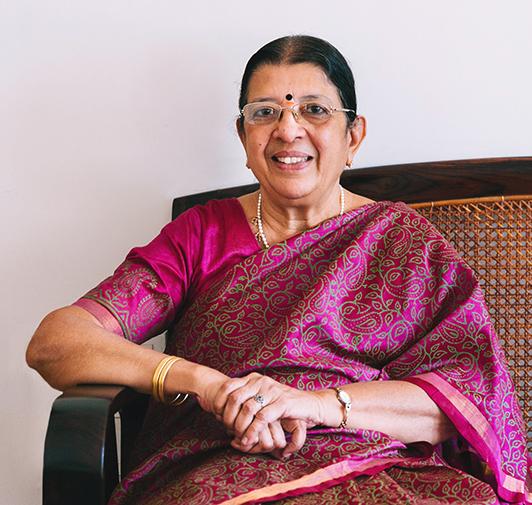 Amidst this unsettling background of facts, is a quiet suburb in Adyar with a 75 bedded hospital for de-addiction, that has grown from a former day care centre that began in 1980 – the T.T. Ranganathan Research Centre for Alcoholism and De-addiction. Its multidisciplinary staff include the team comprising doctors, nurses, ward staff, qualified counsellors, competent administrative staff, who each enrich the treatment program. I had the privilege of an inspiring conversation with the soft-spoken Titan who led this pioneering effort, Padma Shri and Avvaiyar awardee, Dr. Shanthi Ranganathan.

In 1980 when we began, the concept of addiction wasn’t even recognised, and attributed to lack of will power or moral degradation. And if you got such people married or a job, they were to settle down! If at all treated, it was by a psychiatrist who would address withdrawal symptoms. The need to be in rehab was not understood, let alone practiced. We were the first centre in south east Asia!

People didn’t realise earlier that alcoholics need the support of a larger group. Like the Alcoholics Anonymous (AA) groups, that started in 1950. The goal is to support the alcoholic to completely abstain from alcohol, be able to deal with anger and violence and to increase the quality of his life and that of his family.

Most patients were then over 35 years of age, brought in by the wife. Now they come in their 20s or 30s, are divorced and mostly accompanied by their parents! Now drinking starts even after 10th std, in college hostels alcohol is available freely. The age of initiation has come down dramatically!

Alcoholism currently is treated like a necessary evil, and the focus is more on drug addiction!

Tamil Nadu has witnessed a series of protests – by various sections of the society, with a demand for total prohibition. According to the RTI data, politicians are involved from production to –distribution of liquor, and regulate the market to protect the monopoly of such enterprises!

The sale of liquor has always been a steady and dependable source of income for the government to support most of the freebies and populist schemes. It is a complicated web to ­untangle, but possible over time and with people’s collective support networks.

Total prohibition might be challenging. Partial ban measures can mean at least number of new drinkers will be curtailed. Awareness among the population and necessary rehabilitation and self-help programs will help in bringing down the prevalence of alcoholism. Police departments are currently involved in spreading awareness of drug addiction in schools too. There are also many privately managed ­centres.

A rational and scientific policy can help. Availability of alcohol should definitely be reduced and it is not an essential commodity!

WHO guidelines have laid down many standards/ strategies for policy-makers, include regulating the marketing of alcoholic beverages and providing ­accessible and affordable treatment for ­people with alcohol-use disorders, screening programs in health services etc.

I often wonder if bureaucrats or authorities concerned are aware of the WHO guidelines! We have suggested many guidelines like reducing the number of shops, increasing distance between shops, making drunken driving laws stringent, ­increasing costs, no locations near ration shops, schools, ­religious places, shifting opening time to afternoon, etc.

When a person is addicted, the intention is simply to get drunk on the hardest liquor. Problems that are related to finance, family, work, etc do not matter. Many times they have to hit rock bottom to understand the problem, then only feel the need to go into therapy!

That not only the alcoholic, but also their families are handheld in the tortuous process of recovery is the USP of the TTK Foundation. Each patient in our Centre is awarded a Medal for staying sober for a year and what a celebration it is!

Many villages in Tamil Nadu (in districts including Madurai, Sivagangai, Dharmapuri, Villupuram) are 100 per cent alcohol-free because of awareness and peoples’ participation. In 2014, in Cuddalore’s Kacharaiyanatham village, a group of widows whose husbands had succumbed to alcohol addiction refused to vote!

Some positive examples like these are around, as also large scale protests. But with shops in a nearby village and local politicians support, there is always a swift comeback! How long is it actually alcohol free? If it is a good model, there must be more villages across the state.

That illicit liquor is absent is definitely a positive factor. But the damage alcoholism itself causes is very tragic for so many families and with long lasting harmful impacts. Lot of violence and rape seen currently are all traced back to drug and alcohol-dependence. Why is the root cause not being addressed appropriately?

The Mental Healthcare Act, 2017 gives no provision for involuntarily admitting an addict in rehabilitation centres. Addicts cannot decide to get into rehab themselves. What can be done?

Admission voluntarily is definitely better, and the persons do have periods of sobriety when they can be convinced. Involuntary forceful admission being allowed can lead to other issues in our country, due to ignorance and the patient might suffer in the long run. Or the person can be sober for a period and soon back to old habits.

Addiction cannot be considered as a mental health issue, it is an illness that needs to be addressed.

Considering the increasing incidence of addiction, treatment centres are inadequate. There should be more centres for de-addiction definitely, managed professionally with the right standards. Sustained counseling support is needed for the patient and the family, else they will get back with a vengeance causing more distress. While family courts instruct those afflicted to seek rehab, the authorities need to ensure appropriate and professional support is available!

Since 2018, the Ministry of Social Justice and Empowerment has established an Integrated Rehabilitation Centre for Addicts (IRCA) in every district – across Tamil Nadu, there are 23 IRCAs and one drop-in centre, supported by NGOs. The state government runs around 20 similar programs in all district hospitals with medical colleges, besides an exclusive centre at Omandurar Estate for internet addiction rehab. Besides juvenile de-addiction centres in few districts supported by Department of Social Defence, there are a number of private run centres under the monitoring of the ­Institute of Mental Health. There are thousands of AA Groups across India.

Our template of minimum standards of care for de-addiction centres has been made mandatory by the central government. Mushrooming private centres need strict audits.

Reports confirm an increase in the number of retired officials getting into rehabilitation centres. Most get into substance intake to pass time and don’t realise that they are getting addicted!

Ironically, in this background we have army canteens continue to provide subsidized liquor as part of pension benefits, and include it in benefits transferred onto the spouse! Why?

Besides the marked increase in patients admitted for alcohol and drug abuse each year, alcohol related crimes are on the rise in Chennai. Considering the enormity of this issue, can we leave it to politicians and bureaucrats?

Political, budgetary and economic constraints do work against a total ban on liquor in Tamil Nadu, besides the fear of retrenchment in this large industry. Also, the State is not equipped to handle the consequent withdrawal symptoms among a large addict population, if a total ban happens.

But it is true that besides the patients, entire families – women, old parents, and children, suffer trauma endlessly. It is time for those who are suffering to come together and protest stridently to bring about change. As in the case of smoking, where we have brought in stricter rules! Once people realized that involuntary or passive smoking caused great harm, then public smoking was banned, no smoking zones came in etc. We can do that in this area too, with the support of those afflicted and others concerned and willing to support!