Who better than our Chennai cohort Ganesh N. Rajan to illustrate American poet and philosopher Henry David Thoreau’s words “Not until we are lost do we begin to understand ourselves.” Ganesh would know! He suffered what is believed to be the most devastating of psychiatric disorders, schizophrenia, in his late teens circa 1980. After going through the entire cycle of the disability – disturbances in thought (such as delusions), perception (such as hallucinations) and behaviour (such as disorganised speech, loss of emotional responsiveness, extreme apathy) and noticeable deterioration in the level of functioning in everyday life – he trumped it in a way. Ganesh is very well now. He has been on medication for 44 years. “This may not be the need of some others,” he says.

“As a person with schizophrenia, I felt unequipped to face life. I woke up to a world playing various games loaded with discouraging psychosocial measures and rules. Even ordinary people appeared to me as wrestling ineffectively with their situation.” 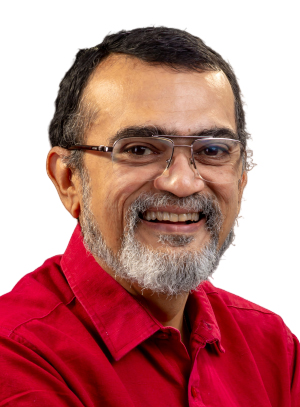 After a 3-year sabbatical and a great deal of serendipity on the way, Ganesh got going with his life and how! He completed his engineering degree in BMS College, Bengaluru, and joined Kirloskar Electric as a sales engineer. He then moved to study management and applied economics in the USA. He has been a consultant for business process mapping and design under various banners. Currently, he focusses on creative writing for the web and corporates. “I made several wrong career choices, but eventually learned what I love to do. I have dropped anchor as a Content Articulator here in Chennai since 2000. My family and I like Chennai. It offers a cost-effective domestic life while still reserving the option to indulge once in a way,” Ganesh tells us. 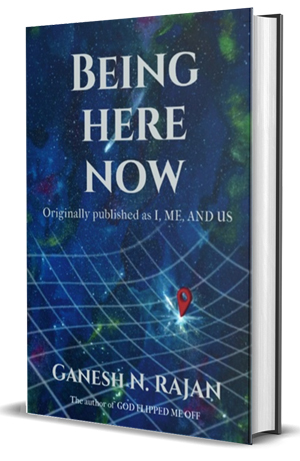 Not feeling fulfilled with being professionally successful, Ganesh has been on a voyage of self-discovery and exploration of mental health issues. On the way he has authored two critical books that defy the stigma attached to mental illness and infuse hope and optimism. “People who face mental challenges have been ridiculed over the ages. Mental health is unfairly linked to mental ability. That is the root cause of faulty impressions on mental health,” observes Ganesh.

His first book took 15 years of writing and refining. It had its seed in the notes he made in 1994 for educating his son and daughter. I, Me and Us (2015) is now in its second edition and titled Being Here Now (2022). “The latter has more clarity in what I meant to convey. Grammar and style have also been polished,” says Ganesh.

Without going in depth into the whys and wherefores of the much-misunderstood illness, which the book ably does for us, let me set the tone for you. To begin at the beginning, what is ‘schi-zo-phre-nia’? Easy to ask but not easily said. “It is a complex disorder affecting many human faculties especially those of the brain”, says Dr. M. Sarada Menon, founder of Chennai’s SCARF. “The illness comes in many hues”, says Ganesh.

What causes it? To put it simply, it is mental manifestation of a physical condition but the jury is still out on it. Some claim a combination of stress and dormant triggers causes the illness.

How do we tackle the illness? We can resolve issues in understanding with the intellect (the mental) and of the mind and body with treatments such as chemicals and counselling (the physical).

Intriguingly, the book carries throughout a fictional dialogue between Nachiket (a patient) and Dharmaraj (a doctor) – think Kathopanishad – which lightens the reading and threads its concepts. Asked what helped him thoroughly analyse mental health issues, Ganesh says it is “primarily a need for answers. Both social and existential.”

That much for a brief overview of the book Being Here Now.

Schizophrenia is as schizophrenia does. That’s the big picture of Ganesh’s second book God Flipped Me Off (GFMO). Here’s a little of the startling excerpts from the novel:

Uttam’s surreal perceptions had begun innocuously – just fleeting smells without any evident source. The aromas ranging from fragrances to garbage…he linked the phantom smells to his state of mind. That simple linking snowballed to a full-fledged altered reality…he heard many phantom voices, voices with no apparent source, sometime coherent and sometimes not. He saw strange things too. Now, telling the real and fantasy apart was getting difficult. He felt higher forces influencing him: conspiracy, divine direction, and social one-upmanship, all combining suddenly into his experience. He saw immediate responses from the environment to his state of mind. Hence, he believed something out there was picking up his brainwaves…

Relentless in reporting the furore in the protagonist’s mind, God Flipped Me Off grabs my eyeballs from page 1 until page 298. It opens by narrating how the hero’s student life goes south. Then rises upward reflected in his graduating, landing a job and getting wedded. From thereon it stays true to its up-down pattern. At one point we see Uttam step down from a bus only to wander in the streets, his mental collapse complete. Read the book for a heartbreaking but hopeful story woven by Ganesh based on personal experiences, interviews with family and friends, case studies of patients, information shared by doctors and his research. GFMO aims to entertain while it informs. The latter it does through the roles played by the psychiatrists in the book.

Incidentally, a screen-writer expressed interest to picturise the book at its launch and issued an LoI. You can get in touch with the author at https://beingherenow.in

13129Why TN continues to dither on its Heritage Act 13125City police tap into Facial Recognition Technology to the alarm of people and politicians alike 13123Heritage Watch: Diamond Jubilee of the Music Academy Auditorium 13121TTK Auditorium turns sixty! 13117The Alcohol Conundrum – an interview with Dr. Shanthi Ranganathan 13113The Puzzle of the Aadu Puli Aatam Board Reserved for a Player – Yeri Katha Ramar Temple, Maduranthakam 13110Short ‘N’ Snappy 13107Our Readers Write