Of Soul and Spice and everything nice

Paachakam, ‘cooking’ or ‘preparation’ in Malayalam, is the title of Sabita Radhakrishna’s latest cookbook, a compilation of heritage cuisine and legacy recipes from Kerala.

Sabita’s earlier cookbooks include Aharam, which won the prestigious Gourmand French World Cookbook Award, India, in 2002, and the highly successful Annapurni, covering all major communities in Tamil Nadu. ‘The South is constantly identified with sambar and rasam. I want to showcase the richness of Southern cuisine.’ says Sabita. Paachakam is one more organic step towards achieving this dream.

The 5th of Sabita’s cookbooks, it is, in a sense, an ode, a homage, to friendship, as it essentially grew out of Sabita’s connections within the Kerala community in Chennai and elsewhere. “I was very friendly with a Syrian Christian neighbour, and she always served me the most amazing, and very authentic, Syrian Christian food.” As it happened, the neighbour’s mother was the well-known Mrs. B.F. Varughese, author of several cookbooks which are even today considered ‘go-to’ sources for traditional Suriani cooking.

And then there was Mrs. K.M. Mathew, a doyenne of Kerala cuisine. “I was in awe of her cooking,’ says Sabita of Annamma Mathew, who was also the founder chief-editor of Vanitha, the popular women’s magazine. Close friends in Bangalore belonging to the Nair community also shared their cooking and recipes with her.

This then is where her exposure to Kerala cooking began, and several recipes in her book acknowledge their sources, featuring names of various friends. The recipes, a reflection of the ebb and flow of history, and the intermingling of races over centuries through the Kerala landscape, stand testimony to the fact that ‘global’ was in existence long before the word joined daily usage. 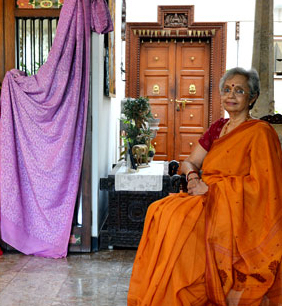 Sabita has divided the book into sections, covering various communities – Nairs, Syrian Christians, North Malabar Thiyas, Moplahs, Cochin Jews, and Nambuthiris and Poduvals. Each of these is preceded by a succinct, yet detailed little background history, carrying little sparks of information. Like – the origin of the name Nambuthiri. Or, who are the Poduvals? The Thiyas? Did you know Cochin Jews cook vegetables in onion juice rather than water, and even today, use handed-down recipes of ‘ancient sweets.’ (A lovely term – a brief vision appears, of a kitchen from bygone days looming out of the mists of the past, connected to the present by a recipe). Each recipe also carries a few facts-at-a-rapid-glance on top, which help set context and background.

Sabita draws attention to an interesting fact – while the other three Southern states have threads of commonality running through their food, Kerala stands a little apart. The food here has its own unique personality and character, something that makes her people very proud. ‘My Kerala friends make it a point to state that they do not ‘borrow from other states’ and are quite territorial about their cuisine.’ 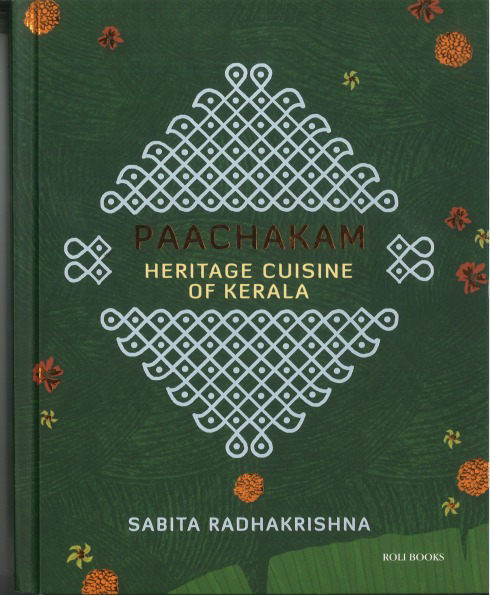 While some recipes are simple, others can be a bit more challenging – like the Moplah ‘Malabar Meen Dum Biriyani’, which runs into two pages, involving a comprehensive list of ingredients and some 20 steps! (‘I had to lie down after test-cooking this dish…it was so exhausting,’ confesses Sabita) As does the famous Thalassery Biryani, also running into two pages and involving 13 steps and a host of ingredients. An echo of the Mughal-Arab trading influences in North Kerala, Sabita calls this the ‘piece de resistance of Mappila cooking’.

Cookbooks until a few decades ago tended to be rather ‘no-nonsense, get-on-with-it’ in their approach. Here, the tone, as always in all of Sabita’s books, is gentle, tolerant of utter cluelessness in the kitchen, her compassion for the novice coming through in her very precise instructions, and in the ‘basic tips’ and ‘basic utensils’ pages. But the perfectionism, both practised and expected by the author, is very much in evidence. As in the truly fascinating ‘Mahashais’ recipe, where you are told how to slice an onion, as if in half, (and then the words tilt into italics) ‘…but do not cut all the way through’. This sudden shift is like an even-toned voice which suddenly displays a hint of steel beneath!

The Nambuthiri and the Poduval recipes, although from different communities, have been combined into one chapter as both have very simple sattvic food, with minimum spice, and very little tempering. The Classic favourites section gives you a quick overall glimpse of certain staples that go beyond region and community – puttu, kadalai curry, idiappam, thoran, vattayappam, chemeen curry, and even a recipe for homemade toddy. And, of course, eternals like nenthrakkai chips and elaneer payasam.

Sabita recalls with affection the one and only Meenakshi Ammal and her Samaithu Paar cookbooks. However, Sabita was perhaps the first, or among the first, who presented traditional recipes ‘languishing in forgotten corners of old kitchens’ in English, thereby reaching a whole new generation of readers and aspiring cooks, the initial inspiration being that she didn’t want to lose her mother’s recipes.

How long did it take to put Paachakam together? The research, she says, took about one and a half years. She personally tried out and tested every single recipe in the book. Writing took another six months – so, about two years. When she was working on this book, she subjected her family to months of Kerala cooking. And, later, their routine blood tests showed their cholesterol had reduced, busting all those theories of too much coconut being bad for you. ‘On the contrary, it is a superfood.’ she says. Which among these are Sabita’s favourites? ‘The Syrian Meen Vevichathu and Kachiamoru, the Nair Manga Meen Curry, the Thiya Kannur Nei Choru, Moplas Thalassery Biriyani, Nambuthiri Ulli Theeyal, and the Cochin Jews Mahashais, to name a few’.

She deliberately stayed away from including information like number of calories in a world obsessed with weight issues. ‘My books reflect a time when food was food – people understood the zen of cooking. Traditional food has always been very finely, scientifically, balanced, while taste and richness were never compromised.’

What does cooking mean to Sabita? ‘Food plays and has always played an important role in my life. A fussy husband who disliked hotch-potch menus became the reason for my becoming a good cook.’

Her philosophy of cooking is simple: Food binds people, which is why the dining table becomes the fulcrum in families – the witness to the ebb and flow in all our lives. Dining tables don’t just groan under the weight of food; they also do so under the weight of the family’s interactions, both positive and negative. ‘Life forges paths around food’, she says.

A final take-away? ‘Cook with love. When your emotions are negative, the same recipe will come out different’. Today, although Sabita lives alone, her connection to cooking, to food, is still going strong. ‘I love cooking. Seven years ago, I could single-handedly cook for 20 people. Not today. But even with age and certain mobility issues, my passion for cooking hasn’t waned.’ She has trained her staff, but watches over them. ‘Do you know people call me ‘Annapoorni?’ she laughs.

Her granddaughters live in the same building complex as her, so food is constantly sent to them. She sends dishes to neighbours, to friends. Everyone who comes home is fed. Sometimes people come by just to share a meal with her. She loves teaching people and is always eager to share knowledge about cooking – tips, ideas, solutions.

She gives all credit to publishers Roli Books for their presentation of Paachakam, for making the book a visual treat. And you can’t help but agree. The lush green cover, with touches of coppery gold and pure white is sure to draw eyes from bookshelves everywhere.

Special mention must be made of the illustrations by Nupur Panemanglor. Beautifully evocative of the rain-drenched, verdant landscape of ‘God’s Own Country’ with its gorgeous backwaters, the images provide the perfect backdrop for the cuisine within.

At the very beginning of the book is an image of a deep green, but plain banana leaf, devoid of food. Almost at the end is an illustration of the same banana leaf, now richly filled with the famous Kerala sadya meal, all 24 dishes in designated places. And at the very end, the banana leaf, once again empty, is folded in half.

Your journey through this particular food landscape is now complete.