Go to Ebrahim Currim & Sons on NSC Bose Road at the busy Parrys junction, and you can pick up an umbrella that matches your personality, your mood and style – even if it’s not raining! It all began when Ebrahim Currim, a kirana store owner in Mumbai, imported the first ‘rain’ umbrella to India in 1860, until which time the only Indian umbrellas around were largely status symbols for kings and deities. The quaint 2,400 sq. ft. store in our city today is an offshoot of this very legacy.

Starting off in 1860 with a single shop in Bazaar Gate Street, Fort, Bombay, Ebrahim Currim very soon moved to larger premises near the Juma Masjid. His sons Rahimbhai, Ramjanally and Goolamally followed him into the business and in 1902, Ebrahim Currim & Sons set up the National Umbrella Factory. Soon thereafter, the company established branches for the Stag Brand in Madras and in Calicut (now Kozhikode) during the first half of the 20th century. Today, their factory has a capacity of 3,000 umbrellas per day! 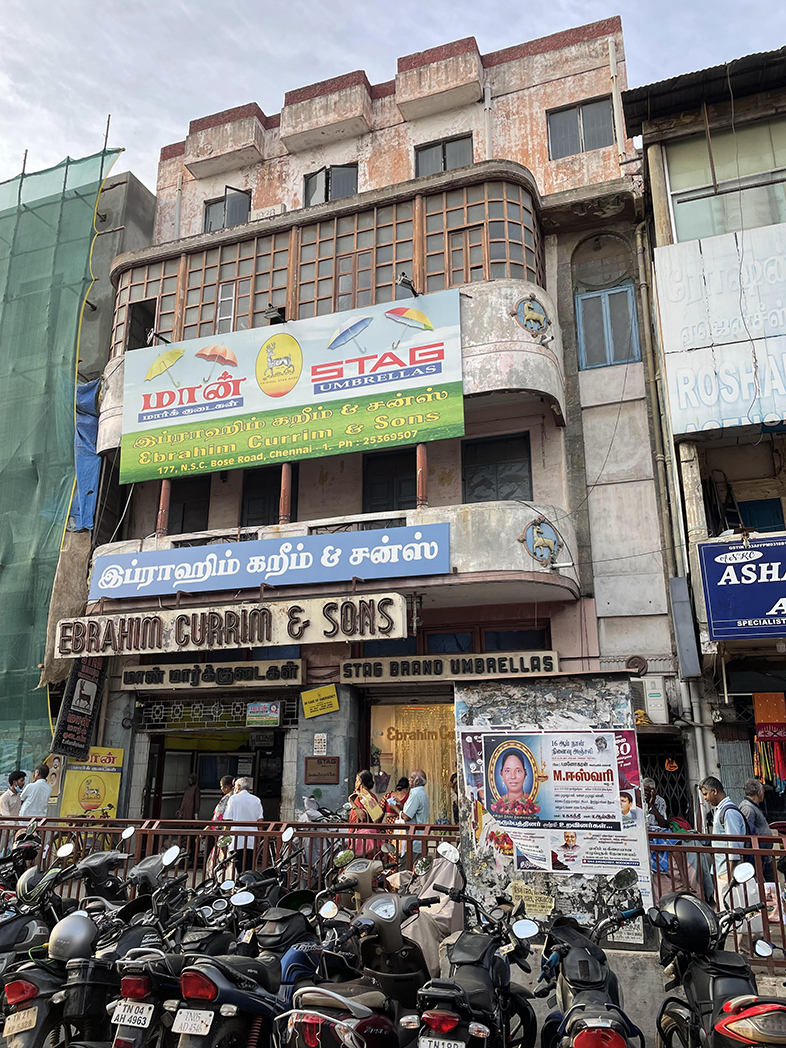 Amidst stacks of umbrellas filling the room from ceiling to floor, the amiable Suresh Shah, Manager, says, “Monsoon time is the busy season, but these days, we have customers throughout the year. 60 per cent of total sales comprises the foldable one and 40 per cent the traditional type. Between October and November, 1 lakh pieces are sold each month. And in other months, about 20,000 to 30,000.” Joining as an accountant when he was 21 years old, Suresh has now been around for 44 years. “My father Maganlal worked here for 45 years, retiring as chief accountant,” he says, adding, “For many employees here, Ebrahim Currim and Sons is a kind of family tradition.This particular building was constructed in 1950 – we even have a letterhead saying 251/253 China Bazaar, Madras!”

The first umbrellas were made of bamboo and silk, waterproofed with wax. This was followed by cane and cotton umbrellas and then came nylon to revolutionise the whole industry. Later manufacturers started using polyester, which was friendlier to print and colour but less durable. “For the last three decades or so, people don’t just buy them for protection from the rain but also from the sun. Further, women like fashionable umbrellas,” says one salesperson. “For children, we’ve a series designed with cartoon characters and for elders, an umbrella that can also be used as a walking stick. We also have umbrellas that show patterns only when they’re wet and others with a silver coating to absorb the heat.” Business during the non-monsoon months include corporate orders and fashion designer shows.

Formerly, only the thatha kudai, the classic, long, wooden umbrella, was popular. About 20 years ago, the folding type ­became famous. A popular gifting option for occasions from birthdays to corporate events, Stag brand umbrellas are often given away as souvenirs. In Mumbai, there is only one counter for thatha kudais, but in Chennai there are three!

All the components are imported from Taiwan, while ribs and handles are brought from Mumbai and Calcutta. Earlier, the material used was cotton from the Century Mills, now replaced by nylon. 50 years ago, a basic model would cost Rs. 30 a piece, now not one is less than Rs. 250. Says Shah, “It’s important to take care of your umbrella so it can last. You can break it in half hour or keep it all your life. We undertake repairs for Stag brand, and 20 to 30 per cent of our customers fall in this segment. One person even came to our head office to try and repair his grandfather’s umbrella. Earlier the trend was to repair, but new trend is to use and throw.”

There are umbrellas with a battery-operated plastic fan for a cooling breeze; brightly ­decorated ones costing around Rs. 2,500 for the traditional Kasi Yatra; ‘Tea cup’ umbrellas with plastic cup shields that prevent water from dripping; and even a popular Magic umbrella, whose cloth blooms with flowers when the rain begins to fall. There is even a torch umbrella to light your path, and the siren umbrella that sends out a call for help! “Generally, every year we come up with an interesting umbrella idea. But the covid period has been challenging,” says an apologetic salesperson. But rain or shine, monsoon or not, the Stag brand of umbrellas will always have a very special place in the hearts of many Indian citizens. As Shah concludes cheerfully, “Currently, as pandemic fears subside and unprecedented rains happen across India, there is so much demand for umbrellas, that we are unable to cope!”