Dr. Beatrix D’Souza – the voice of the Anglo-Indian Community

Dr. Beatrix D’Souza is well known in Anglo-Indian circles in India and overseas, and is certainly a household name in the city of Madras and the State of Tamil Nadu. She has represented the Anglo-Indian community in the Tamil Nadu State Assembly during 1991-96 and in the Lok Sabha during 1998-2004. In fact, she holds the distinction of having been the only Anglo-Indian Member of Parliament hailing from Madras. Her innings as a ‘politician’ has been a remarkable one for the way in which she travelled the length and breadth of the country trying to ensure that projects benefiting the community (under the MP Local Area Development Scheme) were being executed by the civic authorities in a timely manner. Her commitment to community welfare has taken her to most Anglo-Indian pockets in the country, including Bow Barracks, McCluskiegunj, Fort Cochin and the Railway Workshops at Golden Rock in Trichy. She had earmarked rupees fifty lakh of her MP funds towards the betterment of civic amenities in Bow Barracks, but the project was not sanctioned by the Municipality. She initiated measures towards the conservation of Anglo-Indian cultural heritage at McCluskieganj.

In Madras, she helped construct a residential block for the Friends-In-Need Society at Egmore with an allocation of rupees 60 lakh, and an auditorium and four classrooms at the Bishop Corrie School in George Town. In Trichy, she contributed to the construction of the Schwartz Hall at St. John’s Vestry AI School. In Kerala, she inaugurated projects worth over rupees seventy-five lakh out of her MPLADS, including a building for the Holy Family Eurasian School in Cochin. In Kharagpur she funded a water project for Rs.26 lakh. The list of projects undertaken by her is a long and impressive one, but what has stood out were not only her achievements, but also the fact that she took the pains to present periodical report cards to the community, often through the magazine Anglos In The Wind, of all her endeavours. When she was in the Legislature, community members knew what was being done by their representative. There was no scope for gripe or gossip. 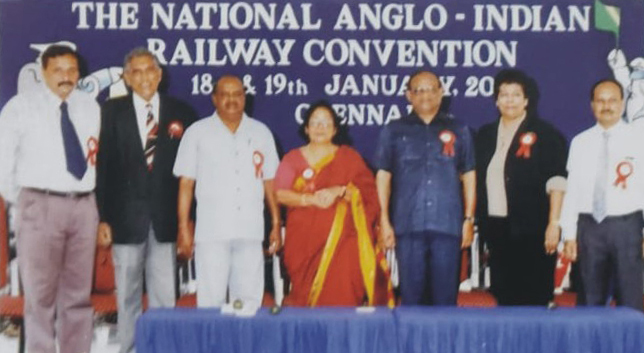 Dr. Beatrix with the dignitaries at The National Anglo-Indian Railway convention held in Perambur.

Until 1993, she was also the President of the San Thome Branch of the All India Anglo-Indian Association; the Branch was founded by her husband Neil in 1975. Beatrix (or Betty as she is fondly known) had this remarkable ability for organising events on a grand scale and getting people to help her in the cause. In 2003, in celebration of 150 years of the Railways, she organized an outstanding National Anglo-Indian Railway Convention at Perambur under the auspices of the National Forum of Anglo-Indian Associations to draw attention to the Anglo-Indian contribution to the Railways in India. The Convention was a two-day affair attended by the two Railway Ministers of State and other officials. An Exhibition, brought from Delhi and set up in the Railway Institute, attracted many visitors.

Betty herself was a professor at various government colleges in the State, though she had begun her career at Stella Maris College, her alma mater. Her first posting was at Pudukottai. After she was selected by the Madras Public Service Commission, she was posted to Queen Mary’s College, Madras as Asst. Lecturer in English. In 1966, she was promoted as Professor (a Gazetted Rank) and posted to Ponneri Arts College. She made the daily trip taking the early 6am train. She also served in government colleges at Wallajahpet and Nammakal, and was often transferred, having had no ‘godfather’. In Madras, besides the Queen Mary’s College, she has also served at Quaid-e-Millath and of course, the prestigious Presidency College. She was in fact the Head of the Department of English in Presidency College at the time she was nominated to the Legislative Assembly of Tamil Nadu, and was therefore acquainted with the intricacies of the educational svstem. She declined the promotion as Principal as it would have entailed a transfer to Salem, and she could not leave her daughters who were doing their 12th Standard at St. Ursula’s in Church Park. 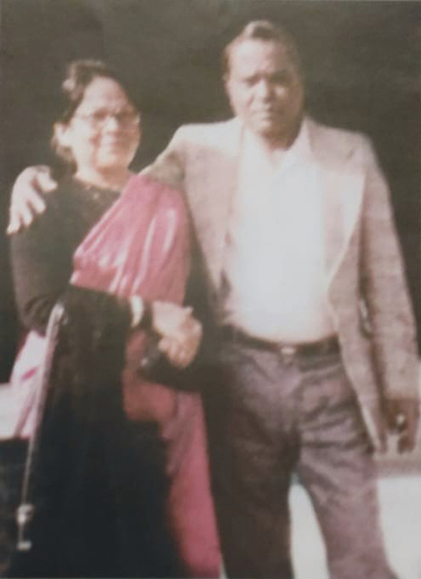 Betty and her husband Neil.

Betty and her husband Neil have both had a personal connect with Australia. Neil as travel agent, was rewarded by Quantas Airlines with free tickets to major Australian cities, for helping the maximum number of Anglo-Indians migrate to Australia. He went on to start St. Thomas Tours and Travels, concentrating on religious tours to the Holy Land, Lourdes and Rome. Neil died in 1994.

Betty has two daughters, Caroline and Bettina. Caroline passed out from the prestigious Institute of Hotel Management in Taramani, Madras, emigrated and settled in Perth. Her Facebook page The Anglo-Indian Kitchen is undoubtedly the best online when it comes to the showcasing of Anglo-Indian cuisine and to a certain extent its culture. Her other page Made In Heaven is even more ambitious: helping Anglo-Indians find their ‘soulmates’ online. Bettina graduated from Stella Maris with a degree in History and Tourism. She emigrated to Perth after her marriage to Dr. Vic James, a veterinary surgeon. Betty has three grandchildren. Caroline’s son Jake and her daughter Talia are both in University, with Jake doing Psychology and Talia, Fashion. Bettina’s son Adam is interested in doing Sports Science, a subject well suited to someone who has excelled in Footy (Australian football), swimming and cricket. Betty has indeed been a great mother to her daughters, backing them to the hilt.

Betty has always been progressive-minded, and neither time nor any passing illness has made her change her disposition. She is of the opinion that the Anglo-Indian community would continue to be a force to reckon with, despite the lesser numbers, and the youth would continue to keep the flag flying high. She has been a tall Anglo-Indian personality with the best interests of the community at heart. She has worn two hats for the better part of her 87 years, one as an intellectual and the other as a leader, and the first hat has always gotten the better of the second.

She was a person who was very outspoken, especially if she felt strongly about an issue, and this quality she put to stellar use as a parliamentarian and as a community leader. I am reminded of an incident that occurred at St. Thomas Mount when the then Archbishop made disparaging remarks about the Anglo-Indian community much to the amusement of the others present. He did so in his homily at the Diocesan Palm Sunday Eucharistic Celebration on top of the hill which was attended by a sizeable number of Catholics from various parts of Madras.

It was a bilingual service, and the archbishop ridiculed and caricatured the few Anglo-Indians in the choir. It was unprecedented and pathetic that the person holding the highest rank in the clergy used his homily, as an occasion, not to shepherd his flock, but to divide it along communal lines and to endeavour to alienate the Anglo-Indian community on the very first day of Holy Week. But Betty was going to have none of it. When the news reached her ears, she set in motion a response mechanism that resulted in the archbishop, who was ticked off by the Papal Nuncio, going from parish to parish apologizing to the members of the Anglo-Indian community.

Even after retirement she has been known to have come to the aid of Anglo-Indians in distress. Some hated her guts, some disliked her bossy’ style and some tried to ‘put her in her place’. But she was not one to take anything lying down, and most often valiantly stood her ground.

Dr. Beatrix D’Souza had thus become well known in mainstream circles in the country as an outstanding Professor of English, an activist for women’s rights, a member of the Lok Sabha and an outspoken leader of the Anglo-Indian community. Although she often visits her daughters in Australia, for her India is home. India is her soul. – Reproduced from Anglos in the Wind, Vol. 24, Issue 53, 2022.