-- by by Geeta Doctor

Who can forget that tempting cry of the ice-cream vendor plying his blue pushcart in the suburbs of Chennai during the hot summers of the Seventies? Who indeed was Rita?

And then came Arun Ice-cream bursting upon the scene in the 1980s. Like the Maruti brand of cars edged out the old aunties – the Ambis, Heralds and Fiats of the ice-cream world – Arun ice-cream rolled into Chennai’s parlors with a style and flavor of its own.

Do we add that ever since the Ice-House was built on the sandy beach front of the Marina to receive shiploads of ice from foreign shores, the City’s guilty secret is a passion for frozen desserts? Not only were there the Dasaprakash, Kwality and Joy ice-creams that catered to its niche customers, there was Jaffar’s at what was then the Round-tana that created multi-tiered ice-cream sundaes with names such as “Knickerbocker Specials” and “Tutti-Frootis”. Then came the Softy ice-creams swirled from metal spouts straight into a cone before being dunked in hot chocolate for a thin coated crust.

It’s hardly a wonder that R.G. Chandramogan as a 21-year-old from Tiruthangal, described in the book as a “mofussil town in the Sivakasi taluk of southern Tamil Nadu’s Virudhunagar district” should dream of ice-candies.

Of course, it was much more complicated. Part of the charm of Harish Damodaran’s account of Chandramogan’s early struggles to make candy-ices in a 250 sq ft rented space in Royapuram and his rise as the founder of “Hatsun Agro” the largest private dairy products as the title proclaims, is the way he traces the singular passion with which he achieved the goal.

There were huge reverses along the way, particularly in the early years, when the young Chandramogan moved his second ice-cream base to a less accessible place and found his clientele melted away as fast as his ice-cream. He had by then also followed the “Rita” model having met the original Punjabi businessman Vijay Kumar Syal by investing in men with pushcarts that sold Arun ice-cream in areas not covered by the others. The book has photos of some of those early vendors who have stayed loyal to the brand 50 years later.

When as a cash strapped business model his venture did not allow him to invest in freezer units whereby the ice-cream could be stored in neighbourhood outlets, a solution presented itself. Chandramogan found that he could supply ships’ chandlers at the nearby harbor with his Arun ice-creams, since ships most often had their own freezers.

Harish Damodaran is something of a maverick writer on agricultural and business enterprises himself. His earlier book, India’s New Capitalists: Caste, Business, and Industry in a Modern Nation (Hachette. Revised edition 2018), signaled the rise of a whole new breed of entrepreneurs in an easy-to-follow style that traced the trajectories of different groups and individuals from varying backgrounds. Here was Adam Smith’s prediction of an “invisible hand” reaching out to uplift hitherto unheard-of individuals, in action. 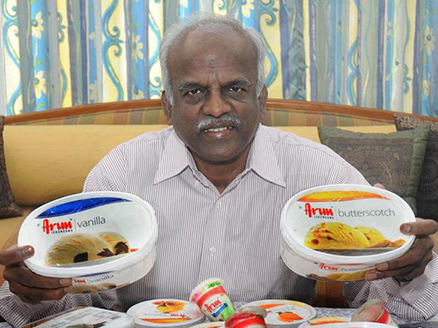 The heart of the Chandramogan story is partly due to his inspiration to what he acknowledges is known as the Amul model, of empowering the farmer in the manner pioneered by India’s premier Dudhwala, Dr. Verghese Kurien. It’s great to be reading about the continuing saga of India’s myriad milk-producers, whether one sees them as the mixed Jersey-Gir cows, or buffaloes, along with the farmers both men and women, the veterinarians, and technicians, involved in sustainable model of milk production, in the birth anniversary year of Dr. Kurien.

This is what Damodaran has to say about Chandramogan’s methods in procuring milk directly from four lakh farmers at the Hatsun Agro Products described as a Rs.5,500 crore company in his preface.

“Chandramogan has also struck me as different from other entrepreneurs in his obsession with having control over every facet of Hatsun’s operations. This isn’t ‘control’ in a negative sense, but manifesting itself in the company procuring milk directly from farmers (rather than bulk vendors, as most private diaries do), making everything (including the packaging film for milk and curd, chocolate paste and cones for ice-cream, and renewable captive power for captive consumption) and compressing the distribution value chain (eliminating clearing and forwarding agents/super stockists).

There’s also a case to be made for the way that Chandramogan had a very instinctive taste for branding. Not only the creation of upgraded milk products like “Arogya” and curds in sachets that appealed to the new class of professional women, who also appeared in TV promos, but the creation of stand-alone ice-cream parlors like Ibaco.

As Chandramogan puts it to Damodaran; “We introduced the consumer to real ice cream through Arun. The same consumer wanted to taste the next level of ice-creams….Let those who went to Arun school join Ibaco college!”