Over 2000 cows in all – old, middle aged and young (in fact, one delivered on the day of my visit) are well cared for in this remarkable facility. Set up over a hundred years ago over a sprawling area (some land had to be recently ceded for the ongoing Metro Rail works) The Madras Pinjrapole is a charitable society registered under the Societies Registration Act of 1860 and was founded in the year 1906. 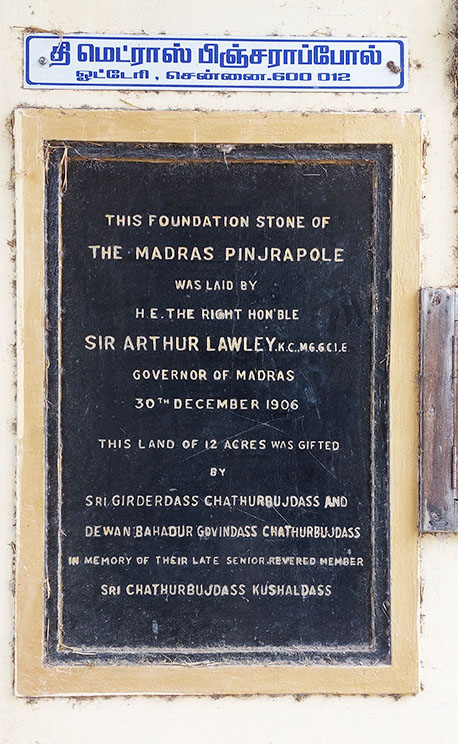 The foundation stone was laid by His Excellency the Rt. Hon’ble Sir Arthur Lawley, the then Governor of Madras, on 30th December 1906. Mention must also be made of Mr. Justice Boddam. The land of twelve acres was gifted by Sir Girderdass Chathurbujdass and Dewan Bahadur Govindass Chathurbujdass in memory of their late senior revered member Sri Chathurbujdass Kushaldass. Generous donations from philanthropic members of the public helped sustain it.

The object of the Pinjrapole was to provide shelter for the dry cows (taken during their non-lactation period and maintained for a fee till they calved again) as well as aged, infirm and worn-out cows which were maintained till they died a natural death. Young cows were systematically added to increase the number of milking cows. The Society requested the Govt for grazing land and stud bulls (which were very helpful in breeding good cattle) to help start a dairy farm. This was a success and raked in good money. 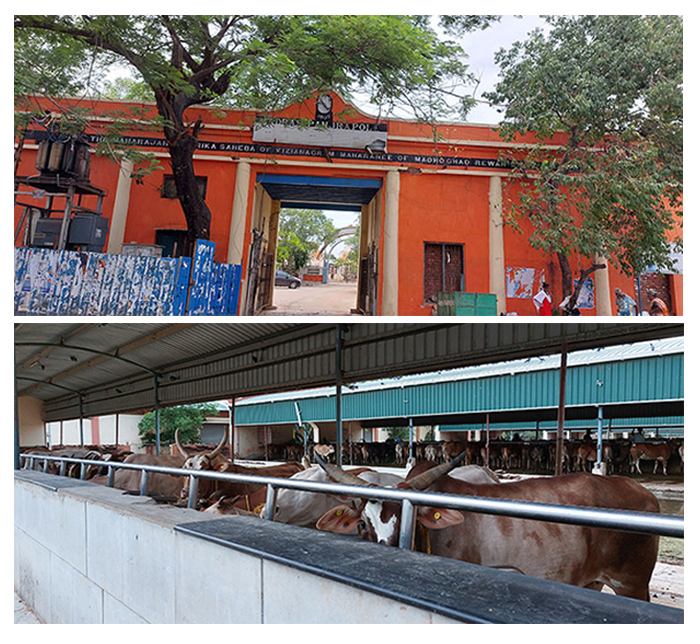 Cut to the present – a hundred plus years since its founding, the Madras Pinj­rapole continues its mission and how!

The Madras Pinjrapole (Pinjrapole meaning Goshala) is not one of those cramped spaces where cows are huddled together with no room for any movement. Temperature controlled sheds, with convenient bays for feeding for both staff and visitors alike, watering holes, and an army of dedicated staff, make this an ideal home for the many cows – some donated, some rescued and some brought here and nursed to good health. There is no dearth of willing donors to support the venture with people paying for the special grass or supporting the numerous schemes. All donations in cash and kind are well documented and acknowledged.

Donors are educated about what kinds of food are beneficial (Spinach, Coriander leaves, Green Grass, Papaya and Cucumber) and which ones aren’t (Roti, Puri, Bread, Paratha, Banana (the long ones), Jaggery. The Management clearly believes that this goshala is a temple of cows as their hand out describes it. And that is reflected everywhere in this beautiful space.