The annexation of the Palayampatti title last month by Mylapore Recreation Club ‘A’ was celebrated as a first time triumph in the TNCA First Division cricket league by a team barely five years old in the senior division. The team has been portrayed as a kind of David that defeated such Goliaths of Tamil Nadu cricket as Vijay CC (promoted by India Cements) and Jolly Rovers CC (a Chemplast Sanmar outfit) in one of the most prestigious races of its kind in the country. It was certainly a most remarkable success story, but MRC were no minnows, captained as they were by India all rounder R. Ashwin (when not doing India duty), and strengthened by the occasional presence of the stalwart batsman Cheteshwar Pujara and more regular duty by stars like Rishi Dhawan and Harsh Dubey, with NS Chaturved playing a stellar role with over 600 runs for the season. The team is also not without corporate support, backed as it has been since the 2015-16 season by the management consulting company Take Solutions. In what seemed at that time like a wild statement, HR Srinivasan, the company’s vice-chairman and managing director, is said to have assured club secretary PR Viswanathan – who was handing over the management of the team – that the new look MRC ‘A’ would become league champions within five seasons. A rare feat of a promise fulfilled against the odds!

This is a lovely fairytale, and it may be widely believed that MRC ‘A’ has only been competing in the TNCA league for the last five seasons or so. Not true. The club entered the league in 1932, when it was conducted by Indian Cricket Federation, a forerunner of the Madras Cricket Association, formed a couple of years later. MRC ‘A’ actually won the Palayampatti shield (or its equivalent then) seven times between 1932-33 and 1947-48.

The family of The Hindu were the original promoters of the club. MRC ‘B’, the second team floated by the family, continues to be sponsored more directly by them, with their employees making up the bulk of the team. For over eighty years, the club was propped up by private initiatives and sheer love of cricket. It was very much an amateur body, with its players casually sauntering in to the ground of a Sunday morning. This is not to suggest any dilution of the quality of cricket on offer. In fact, in the first decade of the tournament, MRC ‘A’ won the league three times, equalled only by Triplicane Cricket Club, its arch-rival in Madras’s own War of the Roses, a la Yorkshire vs. Lancashire.

The two rival teams boasted a world record of sorts for city clubs, producing India’s only double internationals, in M.J. Gopalan (TCC, cricket and hockey) and C. Ramaswami (MRC, cricket and tennis). Several other members of the legendary Buchi Babu Nayudu clan right down to the gifted P. Ramesh in the 1970s, C.R. Pattabhiraman (son of Sir C.P. Ramaswami Iyer and honorary secretary of MCA during the early decades), diplomat G. Parthasarathi, fast bowler P.S. Ramachandran who once took 10 for 18 against TCC and his three fast bowling sons, Ranji Trophy and Madras University stars like P.K. Belliappa, V. Sivaramakrishnan, S.M. Krishnakumar, M.O. Parthasarathi, S. Sriram and S. Vasudevan represented the club at some time or other.

P.R. Viswanathan, who ran the club as its secretary for a long period, acknowledges the huge support the club enjoyed from individuals like Ramkumar, Thiagarajan and Sadasivan.

We cannot ignore the excellent progress the team has made since the Take Solutions “takeover.” Below is the way it moved up from division to division. 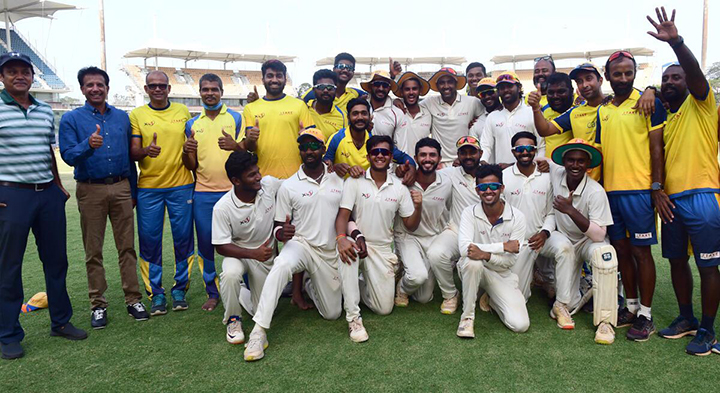 Much of the credit for this success must go to the coaches D. Vasu and M. Venkataramana, besides the inspiring leadership of Ashwin, with his insistence on world class physical fitness, not to mention the wholehearted management support from Srinivasan and his team.