An ingenious device to determine the latitudes – ‘the Kamaal’

The ‘ingenious’ device used by the Coromandel mariners to determine latitudes arouses curiosity. By its function, but not by its appearance and design, this device reminds us of quadrants used by European mariners from the 15th century. The device referred to by Congreve was the kamaal, which the Arab mariners used from the medieval period. Ahmad ibn-Maajid (1432-1500), a navigator–sailor of the Omani kingdom and his Yemeni protégé Sidi-Ali ­al-Maahri (1480-1550) were acquainted with using the ­kamaal decades before Vasco da Gama travel led to Kozhikode. In some of the older publications ‘al-Kasaabaa’ (Arabic, a wooden board) meant the kamaal. The Portuguese, while in India at the end of the 15th Century, called this device tábua da Índia (tablet of India) and tavoleta náuticas (navigation tablet). In the Tamil and Malayalam segments of the 16th century-India, kamaal was referred as rã-p-palakai. Vasco da Gama, during his first trip to India in 1497-1499, stopped at Melinde (presently, Malindi, Kenya). The ruler of Melinde provided the services of ibn-Madjid – a Malindian navigator proficient in using the kamaal – to Vasco da Gama, enabling him to reach India. 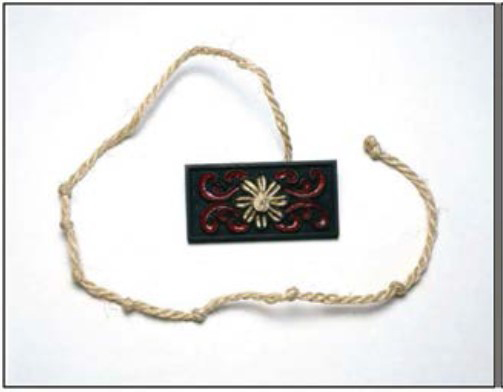 Kamaal used by Arab mariners until the 1900s. The cross-staff evolved from this.

The kamaal used by medieval Arabs was made of a rectangular wooden board (12”×9” (30×22 cm), 1”-2” thick (2.5-5 cm)) with a long cord passing through its mid-point. The cord included knots at intervals along its length. These knots implied the latitudes of the previously determined ports, as they were relevant to the sailor sailing in a particular landscape. The cord was divided into 16 equal divisions, each an isba. As a sailor left the port, he usually sailed either southward or northward until he knew the latitude of the port of his destination with the help of the kamaal before changing the course, either eastward or westward. The sailor clenched one of the knots towards the free end of the cord between his teeth and held the kamaal vertically on his fully stretched arm and viewed the Pole Star through the pin-hole, aligning it with the horizon. The angle between the horizon and the Pole Star was considered equal . As the cord passed through the midpoint of the kamaal, the board naturally got divided into two equal parts. The length of the board gave the altitude of the Pole Star from the horizon. The distance of the observer’s knot held between his teeth and the board was another reckoned factor . Figuratively, this would form an isosceles triangle. Therefore, by applying the equation the latitude was determined. Sailors usually knew the nautical distances for ports from the North to the South, by corresponding them to finger widths on the cord. By measuring the altitude of the Pole Star, they also knew the sailed distance. The kamaal, however, had drawbacks: (i) it was reliable only for measuring small angles; as the angle widened, it was less helpful; (ii) as the Pole Star became closer to the horizon in tropical longitudes, the kamaal was useless. Today the kamaal is used in marine kayaking to estimate distances to land at mid-sea.

The Arabs frequented the coasts of present-day Kerala, Tamil Nadu and southern Andhra Pradesh, seeking spices and pearls in the 7th–11th centuries. Their visits and stay in southern India enabled sharing and transmission of many aspects of their culture and technology with the southern Indians. One example of a simple but brilliant technology transmitted by the Arabs to Indians is the water crane (shaduf), originally from ancient Egypt. 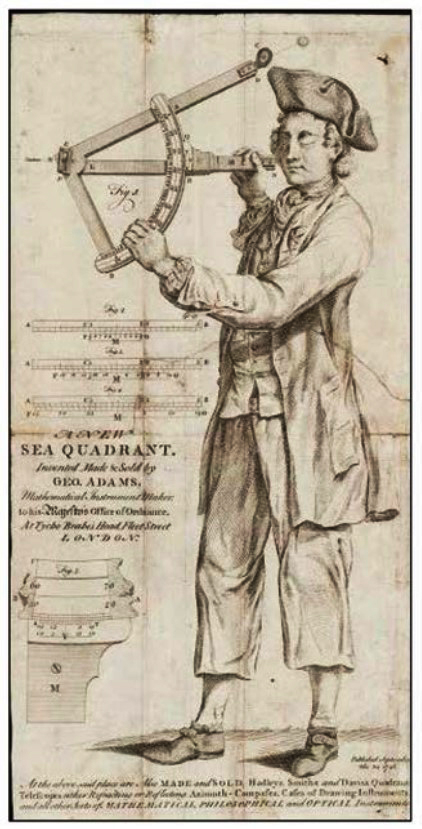 Figure 2. A double-reflecting quadrant (DRQ) developed by John Hadley (1731), the predecessor of the modern sextant. Also known as an octant because of its 45° arc. The DRQ included mirrors to align the sun and/or other celestial objects with the horizon. It was useful in star sightings, and therefore advantageous in marine navigation. It was popular until the mid-19th century.

Gunter’s, Hadley’s, Davis’s and Elton’s quadrants were widely used by European mariners in the 18th and early decades of the 19th centuries to determine latitudes during sailing. By viewing the Pole Star through a pinhole, the quadrants enabled the determination of latitudes by measuring the angle between the horizon and the Pole Star, a technique also used in the kamaal (Figure 2). As a trained engineer, Congreve should have known of the better-performing and more-precise quadrants of that time. The use of the term ‘ingenious’ by Congreve could be in the context of the size of the rã-p-palakai. The kamaal used by the Arabs was large, measuring 30 × 22 cm, with a long cord, whereas the rã-p-palakai used by the Coromandel mariners in the 1850s was a smaller device, measuring 8 × 4 cm and with a much shorter cord. In terms of performance, the rã-p-palakai was as efficient as the kamaal and was widely used by the Coromandel mariners.

Docking ships in the Coromandel, as described by Congreve, was a well-known practice: generally referred to as dry-docking and the docks known as either dry or graving docks. A basin of water was necessary to float the vessel into the dock. Graving docks usually involved the docking of small vessels (5-10 m long). The practice of launching a ship into a basin, followed by adding wooden beams to support the vessel after draining water, is supposed to have been developed by a Phoenician of 3rd century BC Egypt. Congreve’s reference to the docking process in the Coromandel indicates that he was referring to ships – larger than the masulas – owned and used by Tamil traders and merchants, because such boats were physically dragged onto the sandy beach. The process of docking, determinable as ‘dry docking’ practised in the Coromandel in the 1840s, must have been introduced by the Europeans. The likely reason is that no reference to a ‘dockyard’ occurs in medieval Tamil literature, although the term ‘thurai’ implying a boat jetty does exist.

Harry Congreve’s four-page note on the ingenious device – the kamaal – and a few navigation practices of the Tamil mariners of the Coromandel coast in the mid-19th century offers not only an interesting read, but also unveils many dimensions of the ‘science’ they practised. Although the manner in which they measured latitudes while navigating ships and large boats in the Bay of Bengal appears unrefined, such practices obviously worked for them. Otherwise, Congreve – a trained British engineer – would not have referred to the latitude-assessing device, the simplified and miniaturised kamaal, as ingenious. The other methods to measure the rate of sailing and how they executed docking and undocking a vessel could have been introduced into the Tamil country either by the newly arrived Portuguese, Dutch or the Danes, who arrived in the Coromandel a little earlier than the English, because these methods show parallels with the practices of the European mariners of that time.

The details presented by Congreve refer to the mid-19th century. Nevertheless, thinking of how the Pallavas (6th–9th centuries) and Cholas (10th–12th centuries) of the Tamil country launched and navigated their pai-mara-k-kappal (sail boats) to foreign lands assessing the behaviour of the seas they crossed, indeed leaves us baffled.

12989Can we please let medical education be in English? 12987An informed public calls for Transparency in governance, not Translucence 12982Heritage Watch: Whither the Music Season? 12979Centenary of the Southern Railway Headquarters 12975Gandhi Nagar, Adyar – The first layout of Madras that is Chennai 12966The dashing wicket-keeper batsman sans inclusion in the Indian team 12959Short ‘N’ Snappy 12961Our Readers Write