Gandhi Nagar, Adyar – The first layout of Madras that is Chennai

Today’s Chennai may be characterised by hustle and bustle, but several quiet enclaves exist even today that are predominantly residential. One of them is Gandhi Nagar, and it has an interesting history. In order to meet the increasing demand for houses in Madras (later Chennai), the Madras Co-operative House Construction Society was formed in May, 1947, thanks to the initiative and efforts of the Hon’ble Daniel Thomas, Minister for Housing.

The objects of the Society were to acquire and form layout lands making suitable provision not only for house sites but also for amenities like parks, play grounds, schools, shopping centres, child welfare centre, post office, bus stand, swimming pool, canteen and other social amenities. It was modelled on the lines of a modern neighbourhood unit, which is the most popular form of development adopted by town planners in western countries today.

Of the three areas chosen – from among Adyar, Mylapore and Ayanavaram – the Society was able to purchase from the Archibishop of Madras, a large piece of land in Adyar measuring 131 acres at a cost of Rs. 16,00,000. A layout sub-committee, consisting of a Board of Directors, the Chief Engineer of the Corporation Sri Rao Sahib K.K.Nambiar, the Chairman of the City Improvement Trust (CIT) and Dy. Chief Engineer, Public Works Department, was formed. 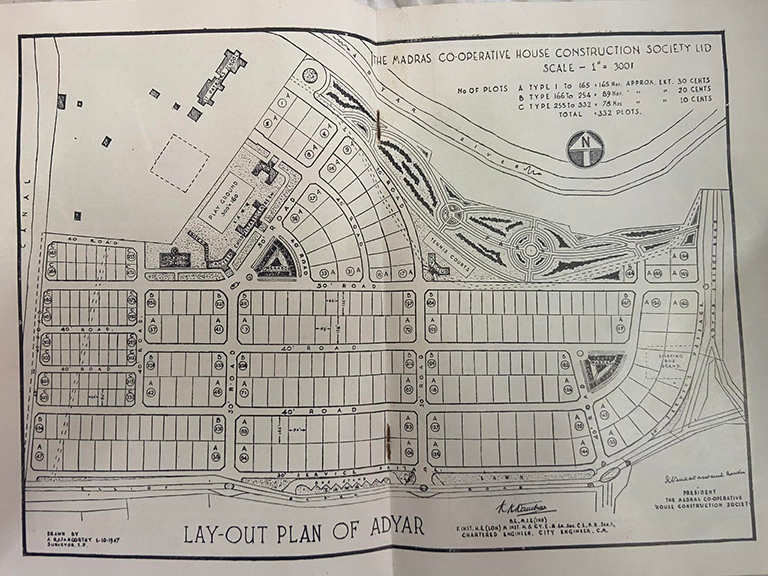 It was planned to be a self-contained unit, with all community amenities, such as paved roads, side walks, underground sewerage, surface drainage, water supply with an overhead tank to ensure uninterrupted supply, and electric lights. An area of 23 acres was set apart for roads, which totalled a length of 23,655 feet, two acres for shops and markets, seven acres for public buildings, four acres for the green verge abutting the service road and 77 acres for house sites. In all, 332 house sites were provided in the layout, 165 A class sites of 30 cents each, 89 B class of 20 cents each and 78 C class of 10 cents each.

Including the value of the areas set apart for common purposes like roads, and taking into account the estimated cost of the area marked for markets, schools and so on expected to be realised later by sale, the prices of the house sites were fixed at Rs. 5,700, Rs. 3,800 and Rs. 2,000 for A, B and C class respectively. An area of about 18 acres on the northern side of the existing approach road to the St. Patrick’s Orphanage, mostly low-lying and sloping towards the margin of the Adyar River, was proposed as a park with lawns and flower beds.

Of the other two areas chosen, one comprise about 200 acres in Mylapore between Brodies Road and Pughs Road on the east and west, and St. Mary’s Road and Greenways Road on the north and south. The second comprised about 30 acres by the side of what was called Mental Hospital, Ayanavaram. In Adyar itself, another area comprising 90 acres was chosen adjoining the sites ­already purchased, to absorb the large number of ­applications for that area (which became Kasturba Nagar).

So far as the house designs were concerned, three classes of houses were proposed. ‘A’ class costing about Rs. 15,000, ‘B’ class about Rs. 10,000 and ‘C’ class about Rs. 5,000, exclusive of the site value. There was provision in the bye-laws of the Society for constructing other classes of houses also, costing more than the estimates mentioned above. The designs under each class were prepared by Mr. Jambulinga Naicker, Consulting Architect to the Government of Madras on the lines formulated by the Designs Committee. Several sittings of the Designs Committee were held before final approval. Three designs under each of the classes, A, B and C were finalised. Option was given to the members to choose any of the designs.

The house sites were given to members on hire purchase, for which they were required to take shares in the society equal to the value of the sites and to pay 1/5 of the cost of construction at the time of occupation. The remaining was to be paid in equated annual instalments over twenty years.

The layout had earmarked lands for a swimming pool, markets and shops, boat club, tennis courts, park, lawn, playground, canteen, child welfare centre and bus stand. There is no mention of a school in the layout except for St. Patrick’s School, which lay outside.

There was a ‘kutcha’ drain (open and unpaved) in every street, though not marked, to channelise the urban runoff (rain falling on the roads) and was led to Adyar river through the area marked as park.

Of the 332 plots which had only independent houses, only 151 continue to remain so, while the remaining 181 plots have been demolished and multi-storeyed apartment complexes constructed there. This culture of independent bungalows giving way to multi-storeyed apartment complexes started in the late ’70’s and Gandhi Nagar was the first area or locality to show the way for vertical development.

Eminent people from different walks of life have lived in Gandhi Nagar in the past.

The writer is Director, Rain ­Centre.

12989Can we please let medical education be in English? 12987An informed public calls for Transparency in governance, not Translucence 12982Heritage Watch: Whither the Music Season? 12979Centenary of the Southern Railway Headquarters 12968A device used and some methods practised by Tamil mariners in the mid-19th Century 12966The dashing wicket-keeper batsman sans inclusion in the Indian team 12959Short ‘N’ Snappy 12961Our Readers Write